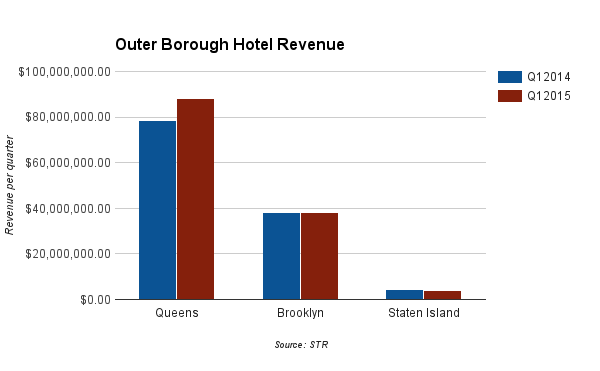 When it comes to hotel performance, lodgings in Queens reigned king.

Hotels in the borough had positive performance across the board including occupancy, average daily room rate and revenue during the first quarter of the year when compared year-over-year, according to data provided to Commercial Observer by STR, which collects and benchmarks hotel data.

Revenue was up 12.2 percent from a year earlier, and demand shot up 11.8 percent with nearly 700,000 stays between January and March in the borough, the data shows. The average daily room rate climbed, even slightly, by 0.4 percent in the first quarter to $126.24.

A significant number of hotels have been popping up in areas such as Long Island City.That could be because hotels in LIC are cheaper, more varied and a few stops away from Midtown, Manhattan, said Robert MacKay, the director of public relations, marketing and tourism for the Queens Economic Development Corporation. Many of those hotels have catered to long-stay tourists, he added, particularly those from Australia, Brazil and Argentina.

“We’re in a hotel boom in Queens,” Mr. MacKay said. “It never ceases to amaze. Every day it just seems to grow and grow more.”

Twenty hotels have opened in LIC since 2008, according to the Long Island City Partnership, which oversees the area’s business improvement district. Those include the Z NYC Hotel, which opened in 2011, and the Ravel Hotel in 2008. There are another 26 in the construction pipeline throughout the western Queens neighborhood sandwiched between Astoria and Greenpoint, Brooklyn.

Mr. MacKay said there are similar hotel numbers in Downtown Flushing, one of the borough’s three major hotel markets along with LIC and the airport market–the areas surrounding LaGuardia Airport and John F. Kennedy International Airport.

So how does the borough stack up against the rest of the city? Better than the other boroughs. Revenue in Manhattan for the first quarter was down 2.4 percent, Staten Island’s revenue dropped 6.5 percent and hip and cool Brooklyn only increased by 0.1 percent, STR reported. (The statistics company doesn’t track the Bronx because it doesn’t have a high enough participation rate.)

Of course, there are still concerns among those in the tourism industry that the hospitality bubble could pop in the next few years. With so many hotels in the pipeline (200 citywide, according to another STR report) and the dollar strengthening against other currencies, hospitality professionals have too many rooms with not enough people in the back of their minds.

“I don’t think that Queens is any more protected from the supply problem than any other borough,” said Josh Gold, the director of political and strategic affairs at the Hotel Trades Council, the union for the city’s hospitality workers.