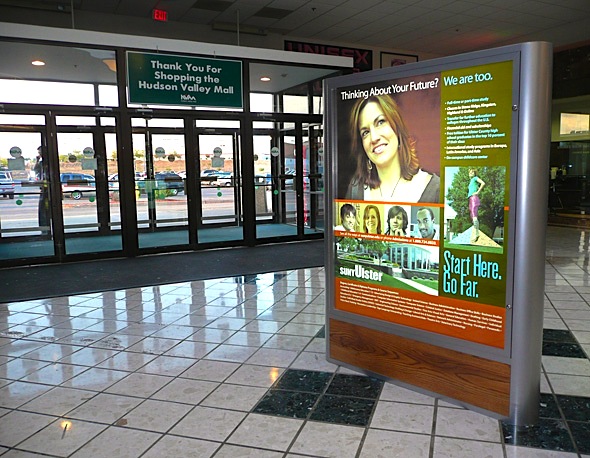 A $50.1 million CMBS loan backed by Hudson Valley Mall in Kingston, N.Y., was sent to special servicer LNR Partners this month, according to a report from Trepp. The transfer marks the largest ever “CMBS 2.0/3.0 loan” to go into special servicing. (CMBS 2.0 and 3.0 refer to the post-recession wave of securitized loan origination that began in 2010).

The Hudson Valley loan originated by CCRE was placed on the servicer’s watchlist in July 2014, after its debt service coverage ratio dropped to 1.08x due to the mall’s declining average rent and an occupancy rate below 90 percent.

The loan, which carries an interest rate of 6.739 percent, totals 8.62 percent of the CFCRE 2011-C1 CMBS deal. The borrower is listed in the loan documents as Syracuse-based PCK Development Company. Representatives for PCK were not immediately available for comment.

Hudson Valley Mall was completed in 1981. J.C. Penney, one of the property’s anchor tenants, closed its doors in early April after more than 32 years of business there, according to recent reports. A mall employee confirmed that the store is now closed.

The vacated parcel, totaling 67,000 square feet, is expected to bring the property’s occupancy rate down to roughly 86 percent, the report from Trepp states.

In total, more than 639,400 square feet of retail space at the property serves as collateral for the CCRE loan and the mall is still anchored by a Macy’s, Sears, Regal Cinemas, Dick’s Sporting Goods and Best Buy.

The borrower has a replacement tenant lined up for the former J.C. Penney space, according to commentary in the loan documents.

A report from Barclays published on Friday indicates that 17 percent of the leases at the mall are month-to-month, while 18 percent of leases either expire in the next 12 months or have the option to terminate if stores continue to underperform.

“It’s rate to see a loan head to special servicing within two to three years of securitization,” Sean Barrie, a research analyst with Trepp, told Commercial Observer. “If it does happen, lower occupancy or poor financials are usually the culprit. Having a replacement tenant for J.C. Penney is huge, but the borrower is most likely keeping their eyes on Sears as well, since they’ve announced several closings in the past year.”