Riguarding Peter: JLL’s Peter Riguardi Has Plenty to Smile About 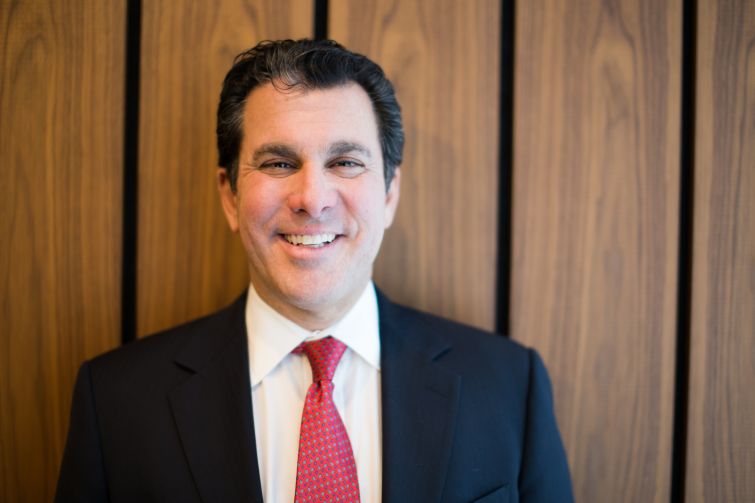 When Commercial Observer stopped by Peter Riguardi’s Madison Avenue office for an interview, the dark-haired, 53-year-old Mr. Riguardi—head of JLL’s New York office—was in excellent spirits. In just a few hours, he would be attending the broker party for JLL’s newest building, 28 Liberty Street (formerly 1 Chase Plaza) where the powers that be were auctioning off $2,000 gift certificates at Saks Fifth Avenue, and first-class stays in Europe and Shanghai. (By the way: These are not the most extravagant giveaways at a JLL party. They once raffled off a boat.)

The Staten Island native, who now divides his time between a house in New Jersey and a residence on the Upper East Side, seems like a genuinely chipper person—he talks affectionately about his sons (two of whom followed him to the real estate business) and gets excited when you mention Staten Island pizza.
We also sensed Mr. Riguardi has plenty to be chipper about, business-wise.

Last year JLL did the highest profit volume in the company’s history. Just last week, The Wall Street Journal reported that JLL had been named the exclusive agent for RFR’s 5-million-square-foot Manhattan portfolio. There was plenty more on Mr. Riguardi’s mind, from the 1.1 million-square-foot Time Warner Center which is being revamped and put on the market to the aforementioned 28 Liberty Street, and more.

Commercial Observer: Tell us a little bit about what you guys are gonna do with Time Warner?
Mr. Riguardi: We see the building as being positioned as one of the top two or three highest rental achievement buildings in the city. We are setting our sights [on it being] a General Motors [at 767 Fifth Avenue] or Nine West [9 West 57th Street]—as being that level of quality and price point. Right now, Time Warner doesn’t move out to 2019, so we are out looking for an anchor tenant—because those anchor tenants are looking at new construction, and we want them to consider us, as well.

Anybody that you can tell me about?
No. But we have some exciting companies that have been through and are sending us proposals that are in the early stages of evaluation.

How much space are we talking about?
A million square feet.

Wow. Are you guys going to making physical changes?
We’re planning a lobby restoration but the building is really only 15 years old and we think it’s well-positioned. We’re going to use the setbacks and convert them into terraces. This is an ideal amenity as it matches the needs of many tenants who value outdoor space, and it is underway now.

What about 28 Liberty Street, a.k.a., 1 Chase Plaza, the other big thing you’ve got in the works?
You know, what’s interesting about Chase Plaza is its institutional, quality construction. So although the building is not brand new, the quality of the building is timeless, right? And [given] the location—close to the World Trade Center, but there is no congestion—I think that the property [is] the new paradigm of Lower Manhattan. When the construction’s finished and the World Trade Center retail fully opens, I think 28 Liberty is going to be a sought after location. The retail will target amenities for office tenants and for the residential community down there. People talk about new construction pricing, but in New York City the most expensive real estate is not the new construction, it’s the quality buildings in the great locations that have some sort of energy to them.

International players have always been such a big part of New York’s real estate story. What are you seeing internationally right now?
The sort of interesting and fun articles we all read about people buying $80 or $100 million apartments—most of those are foreigners. And there’s the tremendous investment that we’re seeing from the Chinese, whether it’s the Fosun tower [28 Liberty Street, which Fosun bought] or the Waldorf Astoria [which was sold to Chinese insurance conglomerate Anbang], or other iconic properties in the city, those are sort of the headlines we all read about. But most of the buildings that are being looked at there are by Canadian pension funds, Middle Eastern investors, European investors. New York has become a place that the world has said is one of the one, two, or three top real estate markets globally with London and maybe Hong Kong. So they are seeing it as a place where capital is safe. There’s gonna be some ups and downs, but over time they see the market here continually rise.

Now that we’re seeing the euro decline, has there been more activity from international investors in the last few months?
No, it’s been a steady, two-plus year thing and I think that right now it’s hard to see where it ends. See, one of the things that’s going on, too, is people who own in New York—and owned [properties] for a long period time—they’re seeing the value of their properties at all-time highs. So you’re saying, “Why aren’t there more properties for sale?” But the problem is, where do you put your money? A lot of these people say, “Well I can sell my building—but what am I going to do with the money?” Or, “What am I going to do, sell my New York property and buy properties in smaller cities? No, I want to be here.” So you not only have this unbelievable appetite to buy New York, but you have a limited amount of properties that become available. When they do, they’re really aggressively sought after.

Speaking of iconic properties that really attract like, say, the Seagrams Building, do you think that now people are focused on the actual property themselves, or the neighborhood?
The neighborhood is always a part of it, particularly for international sales. It’s very easy to convince an investment community offshore about Park Avenue or certain parts of the city, but I think what has made New York even more attractive for foreign investment is that the entire city now is looked at as a good place—it’s safe, it’s clean, it’s gentrified—so Downtown or Midtown South. Look at Edward Minskoff. He built this unbelievable place on [51] Astor Place—he got $100 rents [per square foot] on Astor Place! That’s such a testimony to the city and what we’ve become. So I think that they are still focused on prime historic neighborhoods, but I think they are open to talking about anything now.

In the residential world of real estate we hear people whispering the word “correction.” Are we seeing that in commercial at all?
Look, there is no way the market just goes up. None of us would be sitting here if that were the case. So the market will correct. The question is when, where and why. I think there are parts of the city—the top of office buildings, cool space in Midtown South—that there will be some type of adjustment but it’s not going to be dramatic. And then there are some places—older office buildings, where landlords aren’t making the investment to upgrade the lobby—which might feel it a little bit more. But right now the future looks pretty good. I think that the why to me is probably something to do with the job market.

We saw at the end of last year all these mergers where it seemed like everybody wanted to be like JLL.
First off, I’ve spent many years at smaller or secondary firms so I respect the hell out of people doing that. They are smart people and they have good ideas, but it’s clear that everyone wants to be like CBRE and JLL. That’s what they are all doing. They all want to get [where JLL is now.] I just don’t know that it’s as easy as bringing firms together or hiring more brokers. The investment that needs to be made in the platform, in the technology, in the global reach is billions of dollars. I think it’s going to be interesting to see how they do that and how they get there. Because right now, we’re really going after a certain-sized business. It’s the same two or three firms so it will be interesting to see how they do it and we wish them all the success and luck in the world. As everyone gets better and there’s more competition, it forces us to be better. I have a picture hanging in my office from Mario Andretti, it’s his slogan, that says, “If you’re comfortable driving, you’re not driving fast enough.” The competition is good; we don’t want to get comfortable. We want to continue to push forward.

Peter, how did you first get into real estate?
My dad, Edward Riguardi, was in the business and he was considered the dean of the property management business, so as a young person when we came into the city for a hockey game, we’d visit a property. He was always teaching me the foundations of the business, but he always thought I would be better served to be in the brokerage business. The family is definitely following. My son—also Edward Riguardi—is with Vornado. My other son who has my name, Peter, is also selling and buying real estate in Williamsburg, Brooklyn. It’s in the genetics. I started in a Glengarry Glen Ross-type environment at Williams Real Estate. There were all these people in the room and my role was as a canvasser. I used to lock my desk at night and put scotch tape underneath to make sure no one had the key to get my index cards which had all my leads on them. I couldn’t have asked for a better way into the business.

When you saw that movie, did you have like deja vu?
Oh, of course. There were so many talented people in the bullpen of that company that are still in the business today. Whatever they were doing for us was probably really good training.

What was the first deal that you did?
The first deal I ever did was with a small trading firm—as in it brought in fabrics and garments and sold them to the garment industry. I called them up and matched them up with Williams exclusive space. The first exclusive I ever got was representing the United States Chamber of Commerce. We moved them to 711 Third Avenue and 11th Street.

What else is looming big in 2015?
I’m part of the team that represents Skadden, which I think will be a big announcement. I’m working with a couple of banks that are strategizing real estate.

What was the best deal you ever did?
I’m a salesman at heart so the best deal is the next one I’m chasing. I think one of the most influential, pivotal transactions for my career was when I represented the MTA. We net-leased 2 Broadway. It was a 2.6-million-square-foot transaction. It is still probably one of the largest leases ever done in the city and we were competing at the time with Goldman Sachs to get control of the property. We were dealing with a relatively new Russian investor who owned the property. We were on a time-clock and we had to complete it in a certain amount of time. I was probably a little out ahead of myself to be handling that transaction at that point in my career. It required a lot of studying and thought on my part. For it all to come together the way it did was pretty symbolic. For me to then be able to walk into other new opportunities and say that I was the lead broker on that transaction really helped me win a lot of business after that.