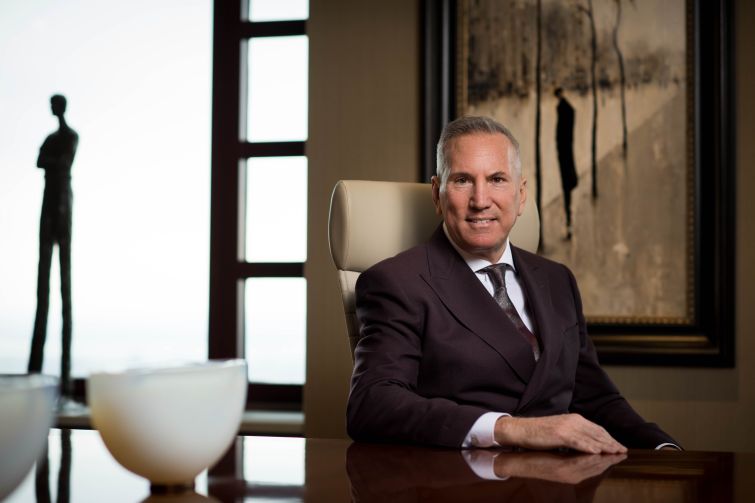 When other developers and lenders say a particular market is no good, Stephen Rosenberg wonders where the overlooked opportunity is. Most of the Greystone chief executive’s success, after all, has come from not following the herd.

Mr. Rosenberg spoke with Commercial Observer at Greystone’s Midtown headquarters overlooking Central Park and the Hudson River. The 59-year-old CEO, who started the firm with a focus on distressed debt, spoke about the company’s continual expansion into new areas of business, getting his M.B.A. while attending dental school and a pioneering project in the Bronx.

Mr. Rosenberg: I was born and raised in Miami. I completed high school there and later studied at Chaim Berlin in Brooklyn before going to Touro College in Manhattan. After graduating, I went to the University of Pennsylvania School of Dental Medicine. While I was there, I also attended Wharton and ended up getting a D.M.D. from dental school and an M.B.A. in health care finance.

Were you hedging your bets between dentistry and finance or were you just very ambitious academically?

I was not at all ambitious academically. At the time I applied to dental school, I just didn’t know what else I wanted to do. I was more of a lost soul looking for some sort of career. But once I got into dental school, I realized I wasn’t that good at dentistry and so I became fortunate that Penn had a good business school. In those days, and I think it’s still true, if you were in one graduate school you could take courses towards your degree in another, as long as you were overlapping the two.

What year was it when you started Greystone?

It was 1988 and I was living in Atlanta. My prior job had been senior vice president and national director of housing for Dean Witter Reynolds. I left there at the end of ’87 and started Greystone in a strip shopping center in Atlanta, between two Asian restaurants, in the back of my friend’s musical instrument store. I remember often being on the phone with clients and someone would come in and try out one of the guitars.

While I was working out of that location I couldn’t do any business in Atlanta, really, because I was too afraid someone would say, “Well, let’s meet at your office.” It had the filthiest industrial carpet. A colleague of mine, Richard, who still works at Greystone, decided to pull up the carpet one day. He managed to rip it out, but what he didn’t get out was all of the glue under it.

Sounds like the exact opposite of this office. When did you relocate the company to New York?

We moved into this space in 1994. At that point, there were just five of us in New York and maybe six or seven servicing people in other states.

How much has the business grown since then?

Today, we have about 7,000 people throughout 24 offices in the U.S. We now own and manage 6,000 apartment units, 38 skilled nursing facilities, and have a loan-servicing portfolio of $15 billion.

How much did Greystone lend on commercial real estate in 2014?

We originated about $4.5 billion last year, up 25 percent from 2013, and plan to grow that volume significantly over the next few years. On our balance sheet, besides the loans that we originate, sell and service, we carry about $1 billion of additional debt in our trading portfolio, including Ginnie Mae bonds that we trade.

Your firm has been active in several arenas over the past year. What are some of the highlights?

We’ve got 12 development sites under construction right now in New York City and Miami. Those are multifamily, condominium and mixed-use. On the health care side, we’re also building new facilities and acquiring more.

What’s one development in particular that makes for a good story?

Our residential development On the Sound, located on City Island [in the Bronx], is the first development there in 15 years. The completed project will include 43 New England-style townhouse condos for families. Those units, which start in the high-$400,000 range, are selling like gangbusters. We’re at 25 percent sold now. One recurring theme in nearly all of our development projects is that there is usually one or several challenging issues—whether it’s zoning, air rights or an existing lien—that make others say, “I don’t have time for this.” We’re aware of those issues going in and we undertake the projects to resolve those issues.

So there’s never been a project that you started and stopped midway?

What’s the most interesting debt deal that Greystone is working on right now?

We recently signed a deal where we’re going to serve as developer and financier on a large nursing facility in Nassau County, Long Island. The total project cost is $85 million and we’re seeking a $63.3 million construction loan. Greystone is in a unique position to leverage its experience owning and managing skilled nursing facilities, its history as a top FHA health care lender and its property development expertise to manage the process for the creation of this facility.

What are your plans for the company going forward?

Our plan is to expand each of our businesses. Right now, we’re making a huge push into the EB-5 space on behalf of our clients. Overall, we’re creating a business model in which clients will go with Greystone due to the fact that we’re more transparent, quicker to respond and truly focused on their business rather than just their loan transactions. One of the goals is to create an environment where customers will choose us even in cases where our products are inferior. My hope is to expand our profitability threefold over the next five years. But even though we’re a business enterprise, a clear mission of the firm is to make a positive impact on people’s lives. As I’ve said before, there are no companies left from the Roman Empire. I know Greystone is going to have a limited life. Maybe it’ll be two years, 10 years, one month or another 50 to 100 years. But at the end of the day, what I want people to say is, “Look at the way they’ve conducted themselves, wouldn’t it be great if we could do the same thing.”

To what extent do you see Greystone moving beyond multifamily and health care lending in the upcoming years?

I don’t see any reason why we shouldn’t. If we see an opportunity in a new space, we are always open to reviewing it, analyzing it and thinking about whether or not we have the bandwidth to run with it. We weren’t always in health care.

I’ve been told that Atlanta and Washington, D.C., are two multifamily markets that give pause for concern. What markets are you wary of?

From my perspective, every multifamily market is attractive—even the ones that are losing occupancy. It’s just a matter of understanding that market and buying at the right value. It’s also music to my ears when the herd is leaving a city and I start to hear, “Hey, Atlanta’s no good, D.C.’s no good.” That makes me think, let me find the opportunity.