Green Day: The City and Landlords are Going Green 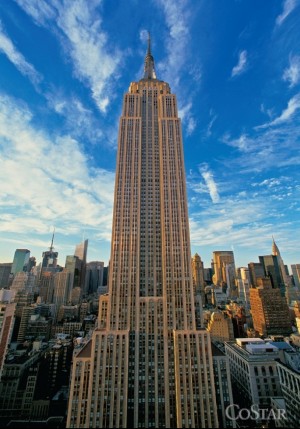 Empire State Building is a test lab for the business case for sustainability (Photo: CoStar).

The word “green” means different things to different people. For many developers and building owners, it’s what fills their pockets. But if you’re an environmentalist, it means something else entirely. However, sustainability is now officially poised to affect everyone in real estate. Last September Mayor Bill de Blasio committed New York City to reducing its greenhouse gas emissions by 80 percent below 2005 levels by 2050. That means it’s time for the industry to reconsider their favorite color.

A major component of the mayor’s One City Built to Last plan is retrofitting every public building in the next 10 years for emissions reduction. Private buildings are in the mayor’s plan, too. The city hopes to catalyze the retrofitting of some 20,000 of them with its “retrofit accelerator” program, making up an estimated 15 percent of citywide built square footage. Two-thirds will be multifamily buildings, and roughly 40 percent will be government-assisted affordable or rent-stabilized buildings, if all goes according to plan.

According to the Mayor’s Office of Sustainability nearly three-quarters of the city’s emissions come from energy used to heat, cool and power buildings. (And as an added bonus, the emissions reduction process is expected to create 3,500 jobs in construction and energy, and upgrade the energy efficiency best practices skills of more than 7,000 building employees.) There are financial incentives and support available to owners via the city’s new Building Energy Exchange where teams of real estate and construction experts are available for guidance, particularly for small and mid-sized owners who may have less liquidity and no in-house sustainability team, said Amy Spitalnick, a spokeswoman for the mayor.

Buildings of over 25,000 square feet will be required to upgrade lighting, perform energy assessments and disclose annual energy use to show compliance with energy efficiency guidelines. “We’ll be setting specific interim targets” for when retrofits are made and emissions are reduced, said Ms. Spitalnick. “If we don’t see progress, it will become mandatory.”

But that may not impact many in commercial real estate where greening properties is a trend and a marketing must.

“Everyone’s always looking for a competitive edge,” said David Pogue, the global director of corporate responsibility at CBRE. “It used to be great architecture, then the grandest lobby. Now it’s building systems. Some owners wanted to be sustainability first-movers, to use green certifications as a differentiation. But today in many markets it’s a requirement.”

Mr. Pogue has led global sustainability programs for his firm, achieving recognition as the first manager of commercial property to LEED-certify more than 300 buildings including 200 Park Avenue and 300 Madison Avenue.

“Real estate is at the nexus of so many issues we’re dealing with, like resource depletion,” he said. “Taking a responsible approach is both altruistic and good economics.”

Gary Pomerantz, executive vice president and mechanical team leader for WSP, an engineering firm, said financial return is easy to justify when it comes to building or retrofitting. So is air quality.

“Better indoor air quality is a selling point,” he said, citing ventilation and filtering. “Better than ‘acceptable limits’ means no end-of-day headache because you’re starved of air.” His team has designed HVAC and other mechanical concepts for new and retrofit projects like the Apollo Theater, Barclays Center, Carnegie Hall and NYU in Abu Dhabi.

Two months before the official opening in 2006, rebuilt 7 World Trade Center was certified LEED Gold, a New York City first and a signal to everyone in real estate: Larry Silverstein of Silverstein Properties thinks building green is a good idea.

“Larry is a big outdoors guy, a boater and he has asthma, but he was not a professional environmentalist so when he decided to develop a LEED-certified office building, people took notice,” said Mr. Lieber. “We were pioneers.”

Seven WTC wasn’t the company’s first “sustainability adventure”—that happened more than 35 years earlier, at 11 West 42nd Street, which Silverstein, in collaboration with Tishman Speyer, renovated at the end of the 1970s. The plan: reduce energy costs for tenants by 10 percent or more by creating a generating plant in the basement and sub-basement (eight diesel generators and reuse of steam).

In 1992 the U.S. Environmental Protection Agency established ENERGY STAR, a voluntary energy efficiency program aimed at reducing air pollution. Congress expanded that in 2005 when it enacted the Energy Policy Act which “identify and promote energy-efficient products and buildings in order to reduce energy consumption, improve energy security and reduce pollution through voluntary labeling of or other forms of communication about products and buildings that meet the highest energy efficiency standards,” according to the legislation.

“Energy Star and LEED were designed as ways to build a building, with engineers and architects deciding what is a good building,” Mr. Pogue said. “We’re beginning to focus on what the occupants want. Better buildings do produce better outcomes, but it’s complicated to measure those results.”

CBRE will release a study in the coming months with research including survey results from 3,000 tenants about 20 building features traditionally viewed as sustainable. The two most important, tenants said, are access to natural light and indoor air (flow and quality). And they’d be willing to pay for these things. “If you can’t achieve LEED, at least focus on these two things,” said Mr. Pogue.

Or you can go big, and go WELL. Currently in pilot phase, the WELL Building Standard—which has performance requirements in seven categories: air, water, nourishment, light, fitness, comfort and mind—was created following six years of research and collaboration between experts from medical institutions and the building industry.

“LEED speaks to the relationship between building and environment,” said Sara Fay, the senior director of marketing at L&L Holding Company, which hired Foster & Partners (as its architect) and Delos (as its sustainability consultants) to design 425 Park Avenue to the highest sustainable standards, aiming for LEED Gold and WELL. “WELL speaks to the relationship between building and inhabitants. They’re very much related but you really need both components. Going forward, WELL will become the next LEED; it will be necessary to stay competitive.”

Certifications happen after 425 Park’s completion—expected to be in 2018—but elements like base floors with 14.5-foot finished ceilings and floor-to-ceiling windows allowing Grade A sunlight (direct) to go much deeper into the space, are sure to win points.

“To not incorporate these standards in a new building is a missed opportunity,” said Ms. Fay. Since it’s relatively early in the design phase, required WELL features can be included at cost, she said, though it’s too soon to know what the final cost will be. Ms. Fay declined to speculate what the price difference is, precisely, but according to WELL’s web site, “The total cost averages less than $100 per employee for a typical commercial office building and includes registration, certification and WELL commissioning.”

“Tenants are more mindful than ever of the corporate culture they want to create,” Ms. Fay said. “They’re making a 10- to 15-year decision. It goes much further than just providing snacks, which tenants themselves can implement. Space affects how a person feels and how they work. Ninety-five percent air filtration is not something a tenant can implement.”

Individual controls for tenants—lighting activated by cell phone, individual AC controls—are mentioned by everyone in the industry, referring to WELL or not. “Conflicts [between tenants in the same space] like hot-cold desk areas are exacerbated by large zones shared by many people. Giving smaller levels of control is psychologically and physiologically better,” said Mr. Pogue. “Give them control and it’s actually cheaper, they’re happier and they perform better.”

These types of upgrades and offerings make sense to everyone, especially when building new. Approaching an existing building is much more difficult.

“People in older buildings know they need to upgrade to compete,” said Mr. Pomerantz. “You can go back after [construction is complete] and retrofit but if you have to start cutting holes to get air in or exhaust out it’s not necessarily easy.”

Retrofitting may not be easy but it is possible, and it doesn’t have to be outrageously costly (just ask the city).

“Most everyone knows the cost of sustainability is incremental in new builds, but incremental cost applies to existing buildings too because of capital plans,” said Dana Robbins Schneider, who leads JLL’s Energy and Sustainability Services. She worked for nearly a year with a team including the Clinton Climate Initiative and the Rocky Mountain Institute to develop an analytical model for optimizing energy and return on investment. The Empire State Building Model for deep energy retrofits is a whole-building analysis that can achieve energy cost savings of more than 50 percent.

And she has real examples with five-year or less pay back and significant energy reduction. “Clients, property owners, are motivated by legislation, shareholders and money,” Ms. Schneider said.
Using the 2.8-million-square-foot Empire State Building as a test lab (JLL was hired by Empire State Realty Trust in 2006 to run the $550 million capital improvement project of the Empire State Building), Ms. Schneider and the team tested and retested until they made the business case for building sustainability, developing a process for the best way to retrofit an existing building (which also works on new construction). The process, which starts with four to six months of analysis, is being implemented in dozens of buildings in New York City, and more than 50 elsewhere in the U.S., according to Ms. Schneider.

After a Theoretical Minimum Energy Use Workshop (not your typical energy audit) the team identified 66 measures to reduce energy by over 65 percent. Usually, said Ms. Schneider, an audit will focus on low hanging fruit, like lights, and end up with a mere 5 percent energy reduction.

The 66 were narrowed to 17, combined by logical relationships. Retrofitting the building’s 6,514 oversize windows, for example, took place on site on a dedicated floor (zero transportation costs), reused 96 percent of existing material and resulted in quadruple the window performance for 70 percent less than the cost of replacing. All that and a reduced load on the HVAC, which saved $26 million on the capital plan, to add a chiller. The building is now at more than 38 percent energy reduction.

“The process pays for itself in terms of the energy,” said Ms. Schneider. “And the icing on the cake is rental increases, marketing and positioning of asset. If you don’t do it, you’re simply not competing. All things being equal, tenants are looking for LEED-certified and Energy Star-labeled, high-performing buildings.”

Measured savings, Mr. Pomerantz said, are easy for people to acknowledge. His team has designed HVAC and other mechanical concepts for new and retrofit projects like the Apollo Theatre, Barclays Center, Carnegie Hall and NYU in Abu Dhabi. The hard part is when green-sustainable interferes with lifestyle, like a wimpy showerhead. “People really like a good shower, the kind that knocks you over, but mandatory water savings [for certifications] goes right to the showerhead.”

Landmark status can also be problematic.

“I’m not against land-marking, but there needs to be a way to make adjustments,” said Mr. Pomerantz. “You need to be able to modify. We don’t build buildings without air conditioning anymore. I’m not looking to ruin landmarks. Air conditioner window units hanging out have ruined them already.”

Finding someone to disagree was impossible, so we got back to the point: whether you remember the energy crises of the past (inspiring people to care, said Mr. Pogue) or are concerned about a future that’s fuzzy (said Mr. Pogue) or are motivated by savings and tenant appreciation (said everyone), being green and sustainable is for you.

“The bottom line is the bottom line,” said Mr. Pogue. “Use less of anything and it has a positive economic outcome as well as being good for the environment.” 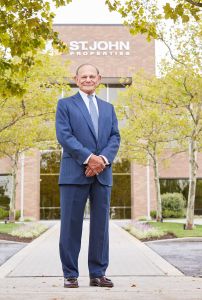