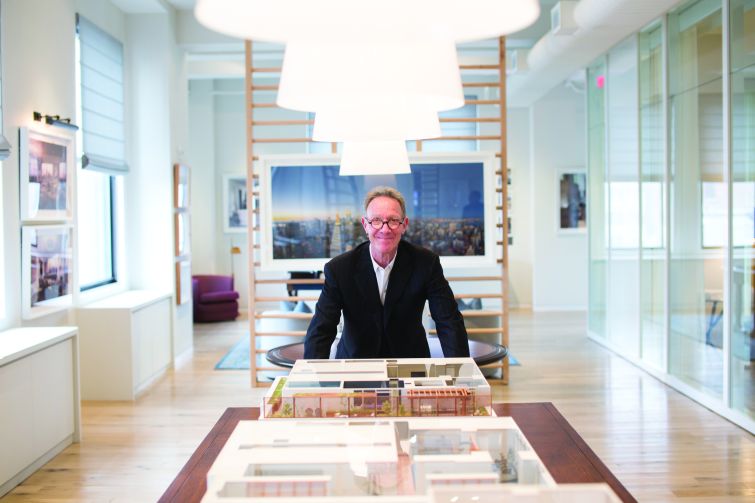 It was 2013, and Bruce Eichner was standing in the dimly lit hallway of a residential building on East 23rd Street begging the owner for his air rights.

“He would not return a phone call or an email for five months,” said Mr. Eichner, the founder and chairman of The Continuum Company, who needed the air rights for his ambitious residential project at 45 East 22nd Street near Madison Square Park (at a planned 65 stories, it will be the tallest residential tower in Gramercy). “I’m sitting in my office and I was like, ‘screw this.’ I got out of my office, went down, rang the doorbell.”

After the landlord refused to let Mr. Eichner into his East 23rd Street apartment, the two stood in the hallway for 45 minutes (the landlord was barefoot), sketching out details of the transaction on a legal pad. (The reason for the landlord’s hesitation? He had built a garden on his roof and was terrified of doing anything to provoke a building inspection.)

This was far from the only shameless plea Mr. Eichner made for air rights in this pocket of the neighborhood. For months, he bartered with building owners and restaurateurs, including with Avtar Walia, the owner of Indian restaurant Tamarind, which has since moved to Tribeca to make room for 45 East 22nd Street. Another restaurateur agreed not to make a fuss, but months later his partner demanded that their lease be bought out. And he faced down the most trying of all real estate fixtures: a co-op board.

Yet in a little over a year, Mr. Eichner secured the necessary air rights to have his vision for the 777-foot-tall 45 East 22nd Street come alive.

“The entire thing, soup to nuts, took about 14 months, which is to say, nothing. But…it was Game of Thrones,” Mr. Eichner said, showing Commercial Observer a blueprint of the various parcels he had to assemble to make a go of his new project. “Every one of these things separately was torture.”

Mr. Eichner peppers his conversation with the patter of an Elmore Leonard character mixed with an affable Jewish uncle (“Mr. Overbuild” is a term for one of the people he was trying to secure his air rights from), born in a real estate developer’s body.

He is also undertaking another superlative project in Manhattan: the tallest building in Harlem at 1800 Park Avenue between East 124th and East 125th Streets. When completed, 1800 Park Avenue, adjacent to the Harlem-125th Street Metro North stop, will be a 32-story tower with 63,200 square feet of commercial and 633,700 square feet of residential space, which includes 673 apartments. Of these apartments, a combination of studios and one- and two-bedrooms, 80 percent will be market-rate and 20 percent will be affordable.

Mr. Eichner has bet big before, but with mixed outcomes; in January 2008, the developer defaulted on his $768 million construction loan for the Cosmopolitan of Las Vegas, which at $4 billion has the dubious distinction of being the most expensive casino ever built in Sin City. In the early 1990s, he defaulted on CitySpire, the 70-story property at 150 West 56th Street, and 1540 Broadway, the 44-story tower in Times Square. But he waves away the idea that this is a comeback for him. “The press likes bylines,” he says, they “like headlines, [they like] labeling.” For his own purposes he sees more selectivity on the horizon, but he’s also insistent that his projects will be the winners in a different kind of Game of Thrones—the market for super-luxury condos. Mr. Eichner spoke to CO at the immaculate 45 East 22nd Street showroom about his latest act and why he’s all in on his properties in Harlem and Flatiron.

Commercial Observer: Do you think that the prospective buyers for your property at 45 East 22nd Street are the same demographic as those looking at 15 Central Park West or One57?

Mr. Eichner: I don’t think so. Those buildings are priced … at almost twice what this is priced at—certainly 50 percent higher.

What are the mid-range prices at the building?

The mid-range price is probably $3,500 a foot. Basically, other than the eight full floors, there’s really nothing in the building that’s over $10 million.

What would you say is your direct competition in the market?

At this point, I don’t think we have any. I would say that the best competition would be 50 feet to the west at One Madison. Now, the interesting thing is the differences between One Madison and our building. One Madison has two elevators; we have three. The footprint for the building at One Madison is 3,310 feet; our footprint is like 4,500 feet. Their full floor is actually more than 1,200 feet smaller. They have no garage; we have a garage.

When is the building expected to be completed?

The first occupancy should be late fourth-quarter 2016.

How are sales going?

We’re somewhere between 25 and 28 percent sold.

Are many of the buyers foreign?

No. What’s interesting is if you’d look at the names [you’d think they would be] international. But they’re all from here. It’s all local. Everybody that’s bought here so far has been from New York, New Jersey, Connecticut.

I don’t think there is one. What I try to do is come up with a mix where there are like maybe four or five types of buyers. I’m pretty sure that the lower A three-bedroom apartments, which are all in the $6 million range, are family apartments. Somebody wants three bedrooms and they don’t need the view. Then, there are some really funky duplexes, and they’re like eight of them. They have great views and that’s a totally different buyer.

There are eight full-floor apartments and those are at the top of the building and they have 360 degree views of the world. And actually, the top three or four of them look down on One Madison. And then there are two penthouses. One is slightly larger than the other. They are both duplexes and are obviously for two people that don’t have a budget.

This building is heavy on amenities.

I think the amenities in this building are probably the coolest set of amenities I’ve ever done. There are only 83 units and there are five floors of amenities. The amenities are really split, so there are two floors for the athletes—half-court basketball court, a golf simulator, a really pro-style gym, yoga. If you want to play sports, this is the place to go.

It’s also got on the fifth floor a billiards room, TV room, a game room for kids, outdoor space where you can go. Everyone in the building who has one or two children, they’re going to hang on the fifth floor. It’s totally casual. And on the first floor, I did something I’ve never done before either. At the back of the building on the first floor is a two-story library. So if you want to hold a business meeting, but you don’t want to leave the building, “It’s Saturday. It’s Sunday. It’s snowing. It’s raining.” Just go downstairs.

Do you think that residents will really be using the Upper Club [the communal living and dining space] on the 54th floor?

I will bet you 50 cents, double my maximum wager. Of all the things in the building that will be copied, this is it.

Do you think that an approximately 800-foot building will look out of proportion with the rest of the neighborhood?

Well, number one, I think that the stone base [makes a difference]. I didn’t think a glass tower going to the street was appropriate, like One Madison. I don’t see the relationship between that and the neighborhood. But I’ve got the first 90 feet is granite, which is intended in some manner, shape or form to tip your hat to the fact that you’re in the Flatiron District.

I also think that [Kohn Pedersen Fox] did a fabulous job with the very eccentric design. The building is 75 feet wide at the bottom and 125 feet wide at the top. There’s nothing else that’s been designed like that in North America. Every floor actually gets larger as you go up the building, which also puts the most expensive apartments with the best views where they belong, at the top of the building.

You are simultaneously investing in the southern end of Manhattan and the northern end in Harlem at 1800 Park Avenue.

I have twin 32-story towers [at 1800 Park Avenue]. You’re going to be able to sit in an office building [on 57th Street] and look right across Central Park at these two things. You’re going to have 20 floors of crazy views of the East River, of the Park, and it’s going to be the first luxury rental building built in Harlem.

Metro-North’s above-ground tracks are right there. Do you think anyone will have qualms about the trains?

No, because the apartments don’t really start until the fourth floor. [In the basement, ground and second floors] I have 80,000 square feet of retail.

Do you know what’s going in there yet?

We don’t. We’re talking to some big tenant.

Many publications have called [1800 Park Avenue and 45 East 22nd Street] your comeback projects.

Plus, I think I am the only developer in New York who has built, let alone built this sized projects, in New York, South Beach and Vegas. And every project in some manner shape or form is really different. The Cosmopolitan [in Las Vegas], no one ever built a 3,000-room casino on eight and a half acres. Who puts pools 120 feet in the air? Basically, you have a better view of the fountains of the Bellagio than the Bellagio does!

Are there are any lessons you learned from 2008?

So if you go back, the best things you ever do in the world are the things you don’t do. And I didn’t do a single new project once I bought the land to do the Cosmopolitan.

The other thing that is kind of interesting: we came out of this horrific, almost god-knows-what crisis. It’s just a function of time before something happens again. Now is it going to be of the magnitude of ’07 and ’08? Well, the banks are doing everything they can to not to put themselves in harm’s way. The Feds are doing everything they can to not cause the economy to go this way.