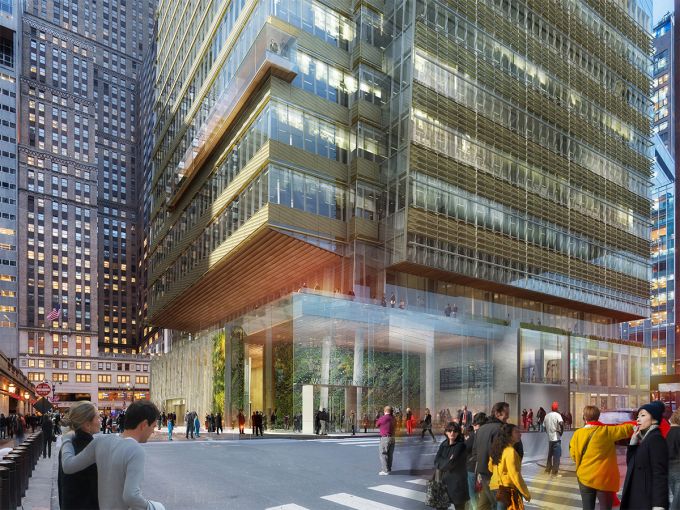 The City Planning Commission today unanimously approved the 1 Vanderbilt application for SL Green Realty Corp.’s proposed 64-story office tower and the rezoning of the Vanderbilt corridor in Midtown. This brings the high-profile property, which is setting out to reinvigorate the Grand Central Terminal area, one step closer to life.

The vote, which reportedly went fairly swiftly, was an opportunity for commissioners to stress this is the type of development that should be materializing in Midtown.

“I am delighted to be voting today on our proposed Vanderbilt corridor rezoning and the application for 1 Vanderbilt, as these applications advance one of the first commitments that Mayor [Bill] de Blasio made: to revitalize East Midtown as a world-class 21st century commercial district, attract more quality jobs to New York City, and deliver vital infrastructure improvements,” said City Planning Commission Chairman Carl Weisbrod during the vote.

The application passed 12-0. Alfred Cerullo, a member of the City Planning Commission and the president and chief executive officer of the Grand Central Partnership, was the one recusal in the vote.

The proposed 1 Vanderbilt project would sit on Vanderbilt Avenue at the corner of East 42nd Street and include 1.6 million square feet of Class A office space, coveted in the Grand Central area (the property would include the first new office space in the area in at least the past decade). TD Bank has already committed to becoming the anchor tenant at the Kohn Pedersen Fox-designed tower, having signed a 15-year lease for 200,000 square feet starting in 2020. The project needed the Planning Commission’s approval in order for the tower to be erected as it is currently designed; however, its fate ultimately lies with the City Council, which will vote on the project by the end of May.

SL Green has also included $210 million in public incentives with its 1 Vanderbilt proposal. This includes funding for much-needed transit infrastructure projects for the already-burdened Grand Central Terminal and public space, including a pedestrian plaza on Vanderbilt Avenue and a transit hall for future Long Island Railroad commuters.

The rezoning of the Vanderbilt corridor is meant to encourage private development and maximize density. As Mr. Weisbrod outlined today at the vote, the special permit that was approved would allow developments from East 42nd Street to East 47th Streets to increase density in exchange for major improvements to the area’s public realm. The 1 Vanderbilt application is the first to utilize the aforementioned special permit.

Marc Holliday, the chief executive officer of SL Green, released a statement following the vote saying he and his team were “extremely pleased” with the outcome.

“This iconic new skyscraper will not only create the modern office space that global corporate tenants demand but it will also generate thousands of good paying middle class jobs and will offer a faster, more efficient commute for residents of every borough, straphangers from across the region, and visitors from around the world,” Mr. Holliday said in prepared remarks.

In January, Manhattan Borough President Gale Brewer expressed her conditional support for the new tower during the Uniform Land Use Review Procedure.

“The heritage of what we now know as East Midtown is rooted in the Grand Central Station transit hub, so it’s only fitting that the redevelopment of 1 Vanderbilt is giving us the opportunity to achieve major, long-sought improvements for residents and commuters,” said Ms. Brewer at the beginning of the year. “This project is producing up-front commitments to both must-have and wish-list improvements, and I’m pleased that working with the developer, we have been able to secure even more public benefits for everyone living, working, and passing through the magnificent Grand Central neighborhood.”