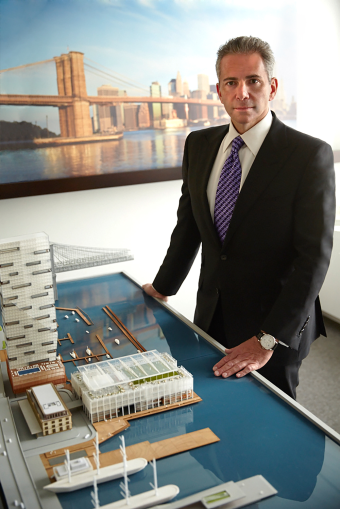 In recent years, the South Street Seaport has found itself overwhelmed by financial problems, under water after Superstorm Sandy and still unchanged as the rest of New York City has continued to progress. Howard Hughes Corporation, which has control of the area through a long-term lease with the city, has put forth a plan to invest $1.5 billion in a SHoP Architects-designed, mixed-use 24-hour development. Among other elements, this multifaceted proposal includes a 42-story residential tower, restoration of the Tin Building, construction of pavilions under the FDR Drive, extension of the East River Esplanade, a new middle school and a marina. The proposal, which spans roughly four city blocks, has been the subject of much debate, and has been both embraced and attacked by local residents and elected officials.

As the future of South Street Seaport remains in flux, David R. Weinreb, the chief executive officer of Howard Hughes, is working to dispel any misunderstandings the community may have about the proposed project. The Dallas-based developer’s involvement with the seaport project means that he spends a significant portion of each month in New York; in October, it was reported that Howard Hughes signed a 37,000-square-foot lease for an office on Water Street.

Mr. Weinreb has led Howard Hughes since 2010. The publicly-traded, 1,100-plus-employee company spun off of General Growth Properties in 2010; the seaport was part of the General Growth portfolio and was one of the 34 assets for which Howard Hughes assumed responsibility. In addition to its proposed overhaul of the seaport, the company is behind the redevelopment of the adjacent Pier 17. Mr. Weinreb also oversees an extensive portfolio of mixed-use, master-planned communities, including in suburban Las Vegas, Columbia, Md., and New Orleans, La. (One of the criticisms leveled at Howard Hughes is that it’s not sufficiently New York-based or politically wired to pull off a massive undertaking like the seaport. But it certainly has big New York names on their board like Bill Ackman and Mary Ann Tighe.)

Mr. Weinreb spoke to Commercial Observer last week about his real estate career dating back to his teenage years, the misconception that Howard Hughes’ portfolio is comprised of malls (General Growth Properties’ largely is) and his firm’s plans for the seaport.

Commercial Observer: You attended New York University and began your real estate career here in the late 1970s. Did you grow up in New York City as well?

Mr. Weinreb: I did grow up in New York. I moved to New York in 1969 from Washington, D.C. when I was 5. I grew up in Chappaqua in Westchester County. I graduated from Horace Greeley High School in 1982 and from there I completed one semester at NYU.

What did you do after your one semester of college?

I went out into the world to pursue my business. I had actually bought my first condo [in the Flatiron District in New York] in my teens. I had an interesting career as a child entertainer, and my parents were great about saving my money. I starting getting interested in real estate as a teenager and then was ready to get out into the world and spread my wings and do my thing.

What did you do as a child actor?

I did television commercials and voiceovers.

What do you remember about the seaport from the 1970s?

It was just one of the great places to go and certainly one of the iconic destinations. In its early days after the Rouse Company completed it, it was a great place of energy.

Did you go there often?

I did, but remember the seaport was completed in 1984. By then, I was out in the world and was focused on my business and my real estate career. It used to be a fun place to go to have a drink and meet friends.

Why did you decide to relocate from New York to Texas in the early 1980s?

My dad is my best friend and so is my mom. They are great parents. They were moving from Chappaqua, and I went with them to help them move. I never intended to stay. The real estate industry in Texas was booming, and I decided to stay for a protracted period at that point.

Howard Hughes’ portfolio is fairly mall-heavy. How will you ensure that the South Street Seaport doesn’t turn into a suburban mall?

First of all, just for clarity, a lot of people think that [our portfolio is comprised primarily of malls]. We’re really not a mall company at all. We have a meaningful retail portfolio, but we have a much bigger presence in the master-planned community business. We own several of the biggest master-planned communities in the country. We’re basically creating cities within the cities that they’re in. For example, The Woodlands [in Houston, Texas] has 55,000 people a day that commute into the [area] to work. It has close to 120,000 people living there. But we also have millions of square feet of Class A office space. So it’s interesting that people think we’re a mall company, but we’re actually not. We don’t have any malls.

O.K., so how will you ensure that the South Street Seaport will retain its historic character?

We have taken a lot of energy and paid a lot of attention to what the community wants and to ensure that the authentic parts of the seaport not only remain intact, but actually anchor the experience [in the area]. We say that the South Street Seaport is the greatest, oldest-newest neighborhood in New York. We believe that the neighborhood can be preserved while also looking into the future. These two priorities can exist together.

What excited you about this project?

[The South Street Seaport] is one of the great, most important destinations in New York. The opportunity to transform a once-great neighborhood and revitalize it back into what it was in the past we thought was a very unique opportunity. It was one we thought we could do quite well because the company has for many years revitalized districts and assets.

Did you have any second thoughts about redeveloping this area after Superstorm Sandy, given how many of the neighbors got flooded?

[Superstorm] Sandy was a very unfortunate event. We were pleased that we could make a difference in the community and I think we have played an important role in bringing a vibrancy back.  Despite the fact that we’re under construction at Pier 17, our See/Change program has been recognized by the local community and a much wider audience to be one of the great programs [bringing people to the area]. It also speaks to who we are as a company. The communities that we operate in are the most important thing to us. It’s one of the reason we are doing surveys, spending time with people in the communities and took part in the Seaport Working Group. We embraced that right away and quite frankly, I think we have a better project given the ideas that came out of the Working Group and incorporating those ideas into the design. It also meant understanding the things that were important to the community.

You’ve said that you are on the road 20 days out of the month. How does that impact your day-to-day life?

I’m traveling away from Dallas as many as 25 days a month now. For instance, for 10 or 12 or 14 of those days, I’m in New York. [When in New York, I am working on the seaport project] and on our other initiatives in New York and on the East Coast [in Columbia, Md. and Alexandria, Va]. But certainly, the seaport is a priority of ours.

One of the reasons I travel as much as I do is because our projects are not here, and as a leader, I think it’s important to be a part of the communities we build in. I’m in [other] markets two, three, four days a month depending on what’s happening. In New York, we recently signed a 10-year lease at 199 Water Street [for Howard Hughes’ East Coast headquarters], and it shows a significant commitment. We thought [signing the lease] was appropriate given our commitment to the Seaport District and our goal in playing a significant role in New York real estate in the coming years.

Why do you think there has been ongoing conflict with the community board?

If you could tell dissatisfied community members one thing they need to know about this plan, what would it be?

I’d say a couple of things. We’re prepared to make a significant financial commitment to both the museum and the district. I hope that we’re seen as being loyal stewards of this district and our plan will continue to preserve and protect it. I would say that the building itself sits on an area that is just outside of that district, but is designed to be a good neighbor in the way that SHoP came up with the architectural elements.

What ultimately pushed you to scale back the size of the proposed tower from 52 stories to 42?

It was partly our work with the Seaport Working Group and having an appreciation for some of their concerns. We came back to a plan that incorporated a $300 million-plus benefit to the community [which Howard Hughes has made part of the overall seaport development plan], which is a very significant number. Yet, we were able to ultimately bring the tower down by adding other elements that will fill out enough of an economic engine to provide those benefits to the community.