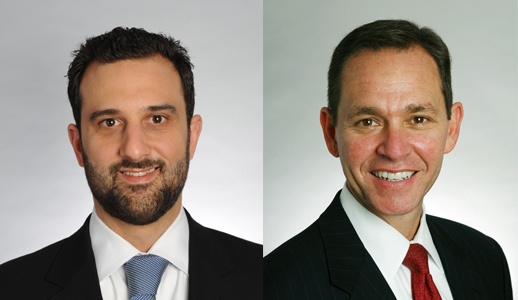 Will Silverman (left) and Jeffrey Peck of Savills Studley. dschlangerobserver

Mr. Peck joined Savills Studley in 2000 and has worked with tenants including National Public Radio, Burberry, the City University of New York, Valentino and Tourneau to assist them in securing office space. Throughout his career, he has overseen approximately 5 million square feet in transactions. He graduated from Boston University in 1985.

“The tenant representation platform at Savills Studley has enabled my partner, Daniel Horowitz, and me to build a top-producing team,” said Mr. Peck.

Mr. Silverman was promoted last month and now works in the capital transactions group, focusing on the sale and recapitalization of investment real estate in Savills Studley’s New York office. Mr. Silverman has worked on $5 billion worth of deals totaling 15 million square feet. He graduated from Tufts University in 2000.

Mr. Silverman imparted his philosophy on the current market to CO.

“People often ask me, ‘in this rising market, is it a good time to sell?’’” said Mr. Silverman. “I tell them, ‘the phrase “Sold Too Early” looks great on a yacht.’”

“This year’s promotions illustrate Savills Studley’s commitment to excellence,” said Mitchell Steir, the firm’s chairman and chief executive officer, in prepared remarks. “We believe it is important to acknowledge individuals for their successes and dedication to the firm’s values.”