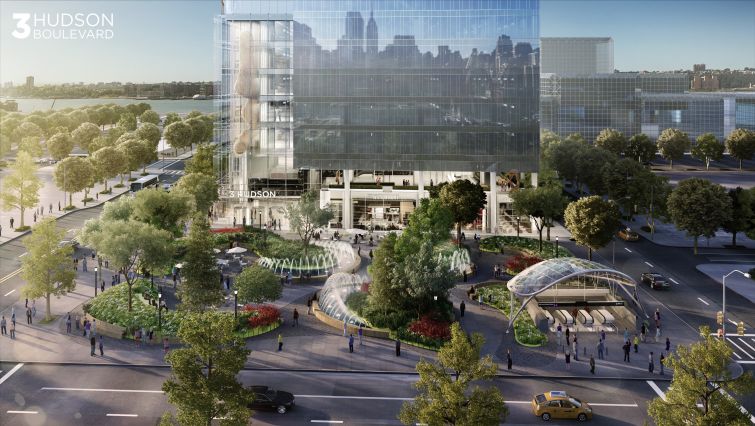 The Moinian Group and Brookfield Properties today got approval from the New York City Industrial Development Agency, or NYCIDA, to receive tax abatement benefits for their respective Hudson Yards developments.

At 3 Hudson Boulevard, FXFOWLE has designed an 1,050-foot, 66-story building, between West 34th and West 35th Streets and 11th Avenue and Hudson Boulevard West. There will be 18,900 square feet of retail on the ground floor and then office space up to floor 46, according to building marketing materials. There will be a residential lobby and amenities on the 48th floor and residences on 49 to 63, although plans for residences are tentative. Avison Young‘s Arthur Mirante, who is one of the members of the team handling leasing at the building, said that once Moinian secures an anchor tenant, that tenant would be able to weigh in on the residential portion. There will be a sky club on the 66th floor.

“Under the terms of the process, Moinian has one calendar year from the date of approval to close with the NYCIDA, through an internal process and review, demonstrating that Moinian has procured sufficient financing to proceed with full construction of 3 Hudson Boulevard,” a spokesman for Moinian emailed. “After passing financing review, Moinian would then obtain a minimum 25 percent tax abatement on approximately 1.5 million square feet of commercial space.”

Brookfield’s project at 401 Ninth Avenue is proposed for the northeast corner of Brookfield’s five-acre Manhattan West and fronts West 33rd Street and Ninth Avenue. It will be 70 stories, with retail on the bottom floors and office space above, the NYCIDA documents show. Brookfield did not immediately respond to requests for comment.

Since January 2002, NYCIDA has closed more than 330 transactions, drawing $11.8 billion in private investment to the city and helping to retain or create more than 103,000 jobs.