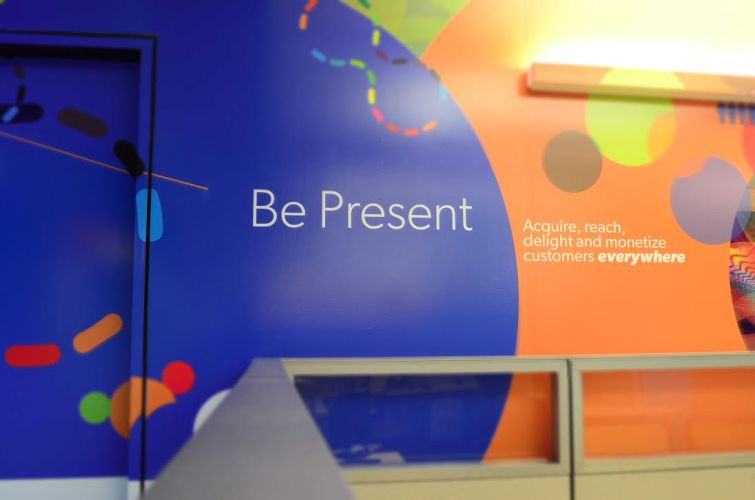 In an age of Snapchat and 140-character tweets, Matt Keiser, the CEO of LiveIntent, is bringing email back.

Mr. Keiser’s attempt to make what is old feel cool again is the inspiration behind his company’s Tribeca office design.

Founded in 2009, LiveIntent has reinvented how to buy and sell advertisements in email, newsletters, alerts and notifications (its tagline is “email is no longer about sending email”). When the 160-employee tech firm relocated to its 20,000-square-foot space at 100 Church Street earlier this year, Mr. Keiser felt inspired by this retro motif. He recruited Luther Knox, a creative director from San Francisco, to design a space where the vibe was “hallucinogenic optimism.”

“You’ve got to be willing to go where no one’s gone before,” Mr. Keiser instructed Mr. Knox in the design process.

Mr. Knox obliged. The office is splashed with an eye-popping orange; in a blog post, Mr. Knox described the psychedelic colors as “fun extrapolations of [the mission] and meant for employees and visitors to find fun, a … core tenet of our culture.”

But the creativity in the office’s design extends past the paint job. Mr. Keiser also wanted “crazy graphics” that represent LiveIntent and the mood the company aims to foster. The walls were wrapped with vinyl that include images that reflect the company’s culture. Mr. Knox said that he channeled pop artist Roy Lichtenstein while working on the back wall, which reads, “be present,” flanked by a superhero.

There are also 60-inch monitors that hang from the ceiling, displaying the company’s upcoming events and exchange information. And in the lobby, there is a billboard-like monitor that displays the company’s mantras, including “find fun” and “elegant dogfooding,” (“dogfooding” for those yet to be wised up to term refers to companies’ testing their own products on themselves and demonstrating their confidence in them).

Mr. Keiser stressed his passion for design when it comes to his work place.

“I think it’s important for creativity and quality and culture,” he said. “If you work as much as I do, you spend two-thirds of your life at work. We deserve a great office.”

“We have a really good problem … [with our] hypergrowth,” said Mr. Keiser. “We’re growing so fast that it makes it virtually impossible to figure out our office needs. If you rent what you need this year, it’s not enough space for next year.”

Come February, LiveIntent will take over the other half of the seventh floor of its current Tribeca building, increasing its square footage to a total of 46,000 square feet. It plans to convert 3,000 square feet into a “giant social room,” which includes a beer tap, a sound system and multiple monitor displays, that will be used for hack-a-thons, guest speakers and happy hours with clients. There will be a disco ball in the center of the room. Behind the executive row of desks, there will be a secret room that can only be entered through a bookcase.

Mr. Keiser’s attempt to make what is old feel cool again is the inspiration behind his company’s Tribeca office design.

The walls were wrapped with vinyl that includes images that reflect the company’s culture.

Mr. Knox said that he channeled pop artist Roy Lichtenstein while working on the back wall, which reads, “be present,” flanked by a superhero.