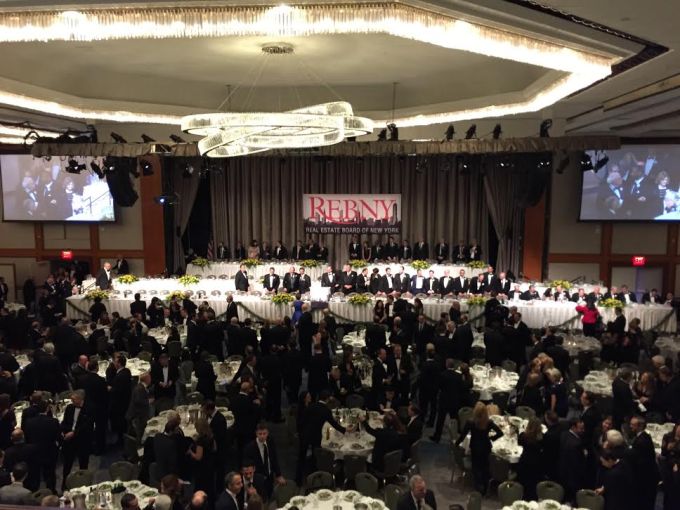 Last night, 2,300 of Steven Spinola’s closest friends gathered at the New York Hilton Hotel at 1335 Avenue of the Americas between West 53rd and West 54th Streets to help usher in his retirement after nearly 30 years as president of the Real Estate Board of New York. At REBNY’s 119th annual banquet, Mr. Spinola was bestowed with the Harry B. Helmsley Distinguished New Yorker Award for his dedication to both the trade organization and the city.

“We are enormously proud to honor our dear friend Steven Spinola for all the spectacular work he does for our industry,” said REBNY Chairman Rob Speyer, the president and co-chief executive officer of Tishman Speyer, in prepared remarks. “For nearly three decades, through good times and bad, Steve’s professionalism, thoughtful advocacy, and generosity of spirit has inspired our community.”

If you weren’t in attendance at what has been called “the real estate industry’s biggest event of the year,” fear not. A Commercial Observer team was there from the pre-banquet cocktail hour through the after-after-parties and has dutifully provided a synopsis of what you missed amid the mingling of real estate tycoons, politicos and New York City socialites.

5:35 p.m.: CO arrives at the Hilton. We notice stacks of real estate publications on a table by one of the coat checks.

5:57 p.m.: Scott Rechler of RXR Realty says he brought his wife 15 years ago to the REBNY gala, but she felt ignored so he has never brought her back.

6:05 p.m.: Council Member Jumaane Williams is seen wearing both a justice for Eric Garner pin and a bracelet in memory of the NYPD’s fallen officers.

6:19 p.m.: New York Post’s Lois Weiss is found sporting a pin that says “real estate goddess” in jewels (or are they diamonds?) “My husband had it made for me,” she tells CO.

6:21 p.m.: “I’ve been working with Steve [Spinola] for over a decade… [and] this is a very special occasion,” says Gary LaBarbera, who since 2009 has served as president of the Building and Construction Trades Council of Greater New York. “As I said to others, Steve is just an individual that brings character and integrity and honesty to every conversation and is a real gentleman to work with.”

6:24 p.m.: CBRE’s Mary Ann Tighe, a former REBNY chairman, says: “First of all, I don’t intend to be parting from Steve Spinola. I believe that Steve Spinola will go to Florida, play a lot of golf and come back and be involved in New York real estate in some other way. I’m not good at goodbyes, but that’s good because I don’t think I’m going to need to say one.”

6:29 p.m.: We can smell the mix of wine, whiskey and other libations grow stronger as more guys in suits flock to the bar.

6:30 p.m.: Jason Haber tells us he will have worked at Warburg Realty for a year next week.

6:34 p.m.: Pamela Liebman, president and CEO of the Corcoran Group, says her company takes two tables at the gala every year.

6:40 p.m.: New York City Council Member Dan Garodnick tells CO why he’s here: “It’s my second [REBNY gala]. First of all, this is my district and there are a lot of active land use and real estate-related issues that we deal with on a regular basis. And this is a good place to catch up.”

6:45 p.m.: For a moment, we see a greater ratio of women than expected, possibly 25 percent of the room.

6:45 p.m.: Bruce Mosler, chairman of global brokerage at C&W, on his firm’s acquisition of Massey Knakal: “I think it fits perfectly within the culture of Cushman & Wakefield, which is they aspire to be the best of the best, not the biggest. And our mantra is ‘bigger isn’t always better. Better is better.’ They really are a quality organization and will add to what we do every day.”

6:53 p.m.: People are slowly beginning to filter into the main ballroom for dinner, and we emphasize slowly.

6:55 p.m.: Mr. Hauspurg says this is his 33rd year at the REBNY gala and notes that Mr. Spinola has done a great job unifying the industry when dealing with Albany and Washington, D.C.

7:02 p.m.: We think Mr. Schneiderman is leaving the party. Earlier he said he only comes for the cocktail hour.

7:12 p.m.: Real estate lawyer Adam Leitman Bailey is here but tells us his wife is at home with their infant.

7:13 p.m.: The appetizer-to-guest ratio is far from ideal. There are far too few dumplings being passed to the thousands of guests present. Oh well.

7:14 p.m.: City Council member Rory Lancman chats with CO, saying “real estate is an important part of the New York economy. There are people here that we do legislative business with. Real estate is a big part of New York. A lot of people who are involved in the real estate industry are also thought leaders in politics and policy. Sometimes we agree. Sometimes we disagree. I like to come by and say ‘hi’ to folks.”

7:17 p.m.: Mayor Bill de Blasio is here, but his spokespeople make it clear that he is not taking questions from the press.

7:21 p.m.: Douglas Elliman’s Joseph Aquino, tells us this is the largest attendance he has seen in his 30 years of attending REBNY galas.

7:30 p.m.: Someone suggests compiling a best-dressed list for the REBNY gala. We think it’s a fun idea.

7:33 p.m.: Overheard among the crowd: “Last year someone spilled red wine all over me.” The guy’s friend responds, “I remember.”

7:34 p.m.: A video about transportation is playing in the main ballroom, but no one is watching.

7:35 p.m.: Ryan Marsiello of newly renamed VTS, hot off a recent deal in which his company received a $3.3 million investment from Blackstone Group, is gallivanting in slippers.

7:42 p.m.: Mr. Spinola is called to the microphone. The “Star-Spangled Banner” is being sung.

7:48 p.m.: Pastor Johnny Ray Youngblood prays for a good retirement for Mr. Spinola during his invocation.

7:57 p.m.: Mr. Weiss tells guests during his acceptance speech that “everyone here better listen up or else my mother will be very mad at you.” He then refers to working in the real estate industry as “going to war.”

8:09 p.m.: The lights are now off; we are in the dark as Mr. Speyer introduces the award for Mr. Spinola.

8:12 p.m.: Mr. Spinola begins his lifetime achievement award acceptance speech by telling guests, “if you give me a minute for every decade, I’ll get off and you can continue to talk.”

8:13 p.m.: Mr. Spinola says real estate is the “engine that powers the Big Apple.” “We love Wall Street, but New York is a real estate town,” he says before telling the crowd to “shhhh!”

The departing REBNY president calls Ms. Tighe both the “first lady” of REBNY and “one of the guys.”

8:14 p.m.: REBNY could not be in better hands with John Banks, Mr. Spinola says.

8:15 p.m.: Mr. Spinola, visibly choked up, concludes his speech by saying he “considers [himself] blessed to have served as your president…so let me ask God to let me offer you an extremely sincere thank you.”

8:22 p.m.: U.S. Senator Charles Schumer is on the dais (he has come directly from a retreat in Maryland and, wearing a grey sweater, appears to be the most casually-dressed person in the ballroom), telling guests “he came here for Steve” and “no one has done more than New York” than Mr. Spinola. He then tells Mr. Spinola to “have a great rest of your life.”

8:39 p.m.: Dinner is served. Earlier, Peter Braus of Lee & Associates aptly pointed out “no one gives a shit.”

9:59 p.m.: The lights flicker inside the REBNY ballroom, signaling the end of the party.

10:08 p.m.: Woody Heller of Savills Studley says no one on his team sat at the table for more than five minutes, a reference to one of the etiquette rules he shared in last week’s REBNY issue.

11:00 p.m.: On the 44th floor of the Hilton, a party, which had been going on all night, is wrapping up. But CO and a close industry source don’t want it to end. The industry source opens up the liquor box the staff has stowed for the night, but, before the unnamed source can successfully commandeer a bottle of Dom Perignon, a weary bartender calls us out. CO and the source settle for warm leftover beers.

11:00 p.m.: A little further west, a real estate executive at an after-party at Nobu tells one CO reporter, “This is the real party, every year.”

11:15 p.m.: We finally get to speak with perhaps the best dressed man at the party, Gabriel Silverstein, the president and managing broker of Angelic Real Estate. Mr. Silverstein, who wears his hair in dreadlocks, is sporting a white fur coat.

11:25 p.m.: CO heads to an after-after-party in a nearby hotel penthouse. We are not on the list but we can come in to the party that goes until 1 in the morning if we don’t write about anything that transpires or who is there. “Deal!” CO happily exclaims. With all of the shhh-ing all night, we’ve been well-trained.

12:50 a.m.: Subway entrances on the Avenue of the Americas are closed so CO opts for a cab ride home.