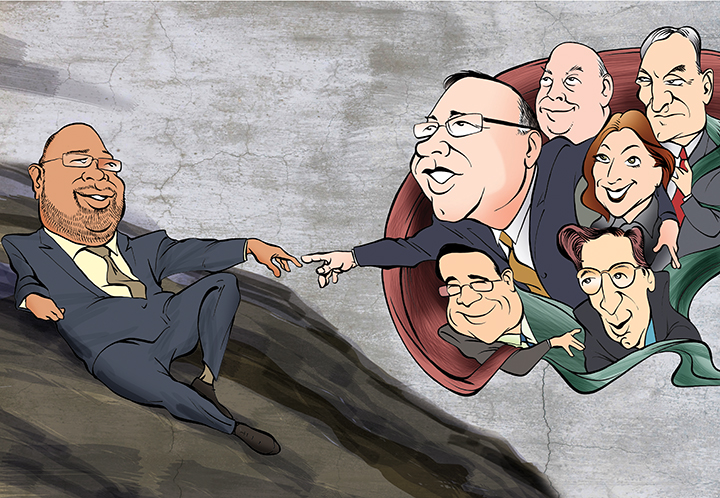 This year’s Real Estate Board of New York gala (see our handy etiquette guide and an itinerary to follow Thursday night) marks the final time in nearly 30 years that Steven Spinola (see the sit-down with Mr. Spinola) is the sitting president of the organization, as 2014 ushered in his successor, John Banks (check out a profile of Mr. Banks). In a nod to Mr. Spinola’s good works (see the timeline), he will be given The Harry B. Helmsley Distinguished New Yorker Award at REBNY’s annual banquet this week (see the profiles on the honorees, Mr. Spinola, William Rudin, Barbara Fox, Peter Hauspurg, Daniel Kindbergh and Glen Weiss).

Also in 2014, New York City got its first taste in 20 years of a new mayor who was not named Giuliani or Bloomberg; Bill de Blasio introduced an ambitious affordable housing plan to preserve and build 200,000 affordable housing units, and 1 World Trade Center opened as Condé Nast employees started to move in, marking a significant day for Lower Manhattan’s revival. (Check out the REBNY president’s hall of fame.)

In addition, a slew of real estate firms merged, the Fulton Center Transit Hub opened and the final segment of the High Line was completed. Unemployment and the city’s murder rate reached record lows and new buildings reached record highs.

So as the sun sets on Mr. Spinola’s tenure, let’s take stock of what he and REBNY did recently (review REBNY’s past year) as the industry segues into a new era under Mr. Banks (check out the advice industry pros have for Mr. Banks).