Two Men and a Heyday 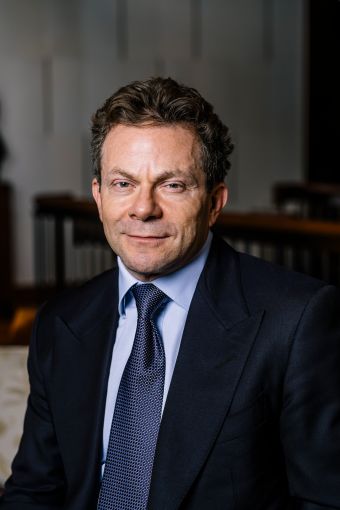 As a kid, Michael Lehrman used to play a game with his grandfather, the late Bronx landlord and developer David Buntzman. They would walk into a restaurant when they knew it would not be that busy—say, between lunch and dinner—and count the chairs and the tables.

“I realized later in life,” Mr. Lehrman said during a recent interview with Mortgage Observer, “that he would slip the guy some money. We’d go into the kitchen, and then we’d talk to the people working there; and find out what works and what doesn’t—how do you make a small business work, how do you make a business that focuses on making its customers happy every day or they won’t come back.”

Mr. Lehrman, 50, said he has taken the lessons learned from that and other experiences with his grandfather to his position as co-CEO of Cantor Commercial Real Estate, a major originator and lender of commercial loans, particularly those backed by commercial mortgage securities. In October, the magazine Crain’s New York Business named CCRE the city’s fastest-growing company.

The firm, which investment bank Cantor Fitzgerald and real estate fund manager CIM Group back financially, has grown from 106 employees nationwide and 73 locally in 2012 to 330 nationwide and 100 locally this year. Revenue over the same period has increased from $178.6 million to an estimated $226 million.

Crain’s, in fact, pegged CCRE’s three-year growth rate at an astounding 24,591 percent—not bad for a firm started in 2009, just as the Great Recession ended and relying on the benevolence of a real estate market that few predicted would have come roaring back as it did. And the market has turned particularly ravenous in the New York City area, where CCRE does a considerable amount of its business. Approximately 15 percent of the firm’s 2014 loans as of late November have been to entities in the New York region, and around 16.5 percent of all loans since the 2010 launch have been as well.

What’s more, CCRE’s potential for more growth at the tail end of 2014 into 2015 seems assured, given its wider national presence and the health of real estate lending generally, and thanks to favorable fundamentals such as record low interest rates and rising valuations, especially here. These factors have combined with the national reach and industry contacts that Mr. Lehrman has helped foster to seed CCRE’s success going forward. The firm said in late November that it had originated 320 loans in 2014, with 120 more in the pipeline.

“The term we use is, ‘These low interest rates have forgiven a lot of sins,’ ” said Manus Clancy, a senior managing director at Trepp, a research firm that tracks commercial real estate fundamentals, including CMBS.

At the same time, CMBS borrowers are paying back their loans—always a positive. Delinquencies on CMBS loans are either dropping or running steady with no big spikes. Trepp’s delinquency reading for U.S CMBS loans was 6.1 percent in August 2014, 288 basis points lower than the same month in 2013. Moreover, in multifamily lending, another CCRE core focus, things are breaking the firm’s way—even when it doesn’t look like they are. The multifamily CMBS delinquency rate for New York City, for instance, is as low as 3.5 percent, according to Trepp—if delinquencies tied to loans for outliers the Stuyvesant Town and Riverton apartment complexes are taken out of the equation.

Present him with strong fundamentals and healthy prognoses such as these, though, and Mr. Lehrman will instead pivot quickly to client relationships to explain his firm’s success. (“Put it this way,” said Anthony Orso, CCRE’s other CEO and Mr. Lehrman’s business partner in various ventures going back to the 1980s, “Michael’s easy: You can get him to talk.”) Mr. Lehrman stressed what he described as the “win-win” aspect of doing real estate lending right now—and the network that can be weaved from one successful deal after another.

Also odd, at least by real estate industry standards, where lone wolves are heralded and empires tend to balance on one decision-maker or family, is the relationship between Messrs. Lehrman and Orso. Each described the other as a best friend, both professionally and personally. Indeed, Mr. Orso is the one who spotted Mr. Lehrman’s future wife in a restaurant in the 1990s, and convinced her to give him a shot.

Chance brought Messrs. Lehrman and Orso together. On their initial day at the Columbia Business School in the fall of 1988, the faculty used the first letters of surnames to break up incoming students into groups of five. There were no N’s and M’s in their group; and so the L and the O fell to talking. Within two weeks, they had started their own business.

That first venture was a litigation consultancy for real estate investors whipsawed by that decade’s real estate crash. It was also the start of a network upon which the pair still rely, decades later, for generating CCRE’s business.

“All of the clients we met in those early days,” Mr. Orso said, “are still some of the same clients we know today.” Both declined to name the clients they worked with then, and now.

Mr. Lehrman himself had considerable real estate experience before Columbia. Raised in New Rochelle in Westchester County, he did retail leasing for his maternal grandfather, Mr. Buntzman, starting in his teens. This included a stint at the Bronx Terminal Market, the more than 31-acre expanse next to the old Yankee Stadium that Mr. Buntzman sold to the Related Cos. in 2004, by which time it had fallen into controversial disrepair (Mr. Buntzman died the next year).

His grandson went on to earn management and economics degrees at Carnegie Mellon before arriving at Columbia at the tail end of the 1980s (Mr. Lehrman also holds a real estate diploma from New York University). After Columbia, he became a managing director at Credit Suisse, co-heading its real estate direct group, where he focused on loan originations, high-yield debt and equity distribution; he also organized the group’s expansion into numerous international locales, including the Middle East and Latin America.

After Credit Suisse, Mr. Lehrman became global head of real estate for financial services firm BGC Partners, originally formed as a part of Cantor Fitzgerald. Mr. Lehrman said he counted Howard Lutnick, CEO and chairman of both Cantor and BGC, as a close friend. Mr. Lehrman oversaw two key real estate-related acquisitions for BGC: that of commercial brokerage Newmark Knight Frank and the assets of Grubb & Ellis, another commercial brokerage, this one bankrupt. In early 2012, a combined Newmark Grubb Knight Frank was born under BGC’s shingle.

Two years after Mr. Lehrman orchestrated the Newmark Knight Frank and Grubb & Ellis takeovers, CCRE, the Cantor affiliate where he had been working part-time since its inception in 2009, was ready to make a splashy acquisition of its own. After about six months of negotiations, CCRE in early April closed on a deal for Bethesda, Md.-based Berkeley Point Capital, one of the nation’s biggest multifamily lenders. The move allowed the firm to dramatically expand its office and employee count as well as its business in the multifamily sector. It also spurred Mr. Lehrman to focus primarily on CCRE.

“The negotiatons? I begged him for months,” said Mr. Orso, then CCRE’s sole CEO, in response to a question about selling his friend on a greater role at CCRE.

The pair have shared an office since the mid-1990s, only a few years out of Columbia Business School—a habit that continues to this day while the duo run CCRE from a glass-enclosed space with two desks and a conference table on the sixth floor of 110 East 59th Street. They are both understandably bullish on the growth prospects of what’s become New York City’s fastest-growing company.

“The capital just coming in from China this year, it’ll be roughly double last year,” Mr. Orso said (it was just under $3 billion then). At the same time, he said he believed that CMBS issuances could reach $100 billion for 2014, up from the $90 billion the year before. Regulatory moves, both domestically and globally, work in the CMBS market’s favor, he added. “I think that as Basel III continues to take effect and Dodd-Frank rules continue to get implemented, the CMBS business is a natural byproduct for banks that are going to have balance-sheet constraints,” Mr. Orso said.

Still, after presenting this strong forecast, Mr. Lehrman brought it back to client relationships, the ones he’s been building since the 1980s, as he emerged from his grandfather’s shadow. “I want you to lend money to people you want to spend time with,” he said, citing advice he dispenses at CCRE. “By definition, those people are going to be honest and more often loyal. They’ll be more honest with you about what’s a real opportunity or not.”