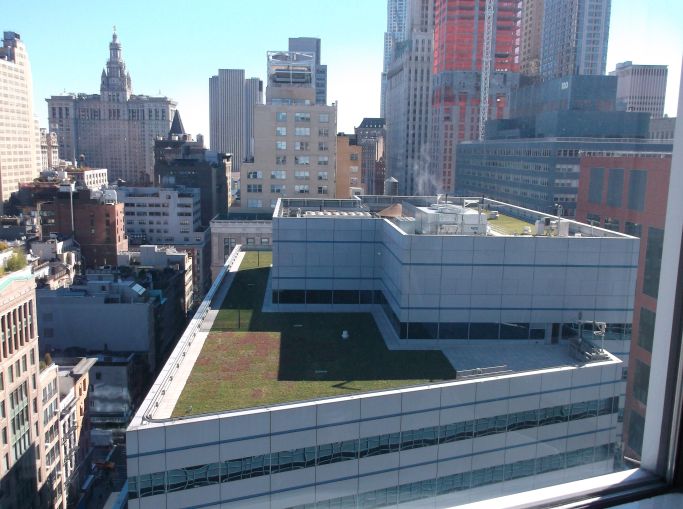 The sedum grass plantings atop both a mechanical platform and the 14-story building’s top floor will prevent storm water runoff, help insulate the structure, reduce pollution and greenhouse gas emissions and help cool the 1987 building during summer months.

The property, which is near the World Trade Center on the full block between Greenwich Street, Park Place, Murray Street and West Broadway, joins installations like a 200-foot green wall at 401 East 80th Street and two other green roof creations in the Resnick portfolio at 250 Hudson Street and the Symphony House residences at 235 West 56th Street, Jonathan Resnick, the company’s president told Commercial Observer.

“This project positions our building at 255 Greenwich for greater performance both near- and long-term, and represents our firm’s commitment to sustainability,” Mr. Resnick said in a prepared statement. “As a result, we are creating a more sustainable environment for not only our tenants, but the downtown community at large. We are proud to improve this important asset, as Lower Manhattan continues to grow stronger than ever before.”

Company officials declined to state the cost of the new roof, but such projects usually cost roughly $25 per square foot to install, according to the U.S. Environmental Protection Agency. Green roofs usually cost more to install than traditional coverings (the Resnick roof calculates out to $500,000, based on the EPA figures), but they more than make up for the difference in upfront costs through energy bill savings, the agency notes. Resnick’s new roof will net the building a “nominal premium” over its lifespan, Mr. Resnick said.

“These green roofs will last a lot longer than a standard roof,” he said, noting the functional covering’s ecological qualities. “You should get a longer life out of the membrane.”