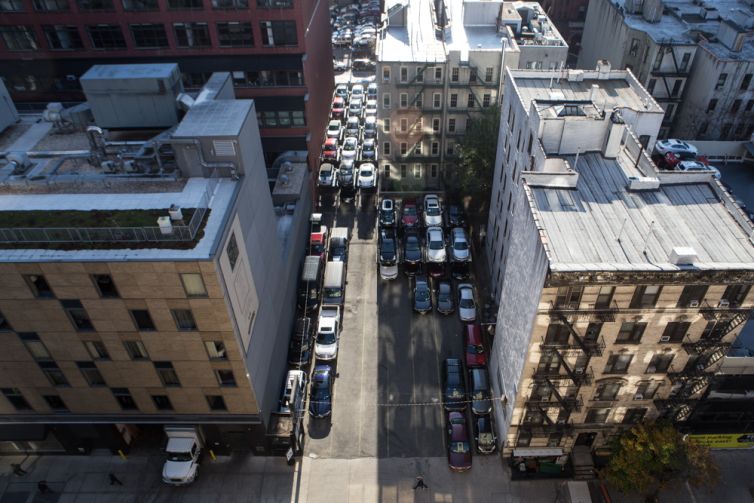 Developers are snatching up whatever lots they can find. mgross170

“They paved paradise and put up a parking lot,” crooned Joni Mitchell in 1970 in “Big Yellow Taxi.” But increasingly in New York City, the situation has been reversed: developers are tearing down parking lots and constructing residential and commercial buildings.

In fact, parking garages are fading and being swallowed up by developers with unlimited appetites for space and the checkbooks to back up their wishes.

Take the case of hotelier Sam Chang, of McSam Hotel Group, who just two weeks ago picked up a parking lot in the Times Square area through a long-term land lease. Mr. Chang partnered with M&R Hotel Group, a development company that purchases and builds hotels, to acquire the 35,400-square-foot through-block site at 322-326 West 44th Street between Eighth and Ninth Avenues in a 99-year net lease. M&R is planning for a 100-plus-room hotel at the site. Then last week, Mr. Chang picked up yet another lot at 111-115 East 24th Street with plans for another 100-plus-room hotel.

“Every time real estate is booming in New York, everyone looks at the parking lot first,” said Sam Schwartz, the former New York City Traffic Commissioner (the traffic department became subsumed by the Department of Transportation), who runs an eponymous consulting firm.

“You have no tenants to kick out,” Mr. Schwartz asserted. “Neighbors aren’t upset about losing a parking lot as opposed to a favorite restaurant.”

That’s exactly what real estate developer Dan Hollander, managing principal of DHA Capital, had in mind when his firm acquired a garage on East 13th Street to turn into an eight-unit condo. Units start at $7.5 million and spike to $30.5 million for the penthouse. “You get vacant possession,” he said, so tenants don’t have to be coerced out or paid off.

Mr. Hollander acknowledged that the days of freestanding parking lots are fast fading away in Manhattan. “They’re only going to stay to the extent that it can’t be developed as anything else,” he said.

New York City encompasses about 1,100 parking facilities. The city’s biggest chains such as Central Parking and Standard Parking (both now owned by SP+) and Icon Parking continue to dominate parking garages, which previously blended with a healthy mix of independently owned facilities.

But the future of parking lots is dim.

“It’s going to be harder and harder to find off-street parking facilities in Manhattan as time goes on,” Mr. Schwartz said. “Those parking facilities will be for the 1 percent of the 1 percent.” (Case in point: At Mr. Hollander’s new East 13th Street building, there are 11 spaces in a robotic-automated system. Its tenants likely own “weekend cars and city cars,” Mr. Hollander said, explaining why there are more spots than dwellings. Every condo owner is provided with one parking spot; additions cost $500,000 each. And there are even more eye-popping examples—at the new condo at 42 Crosby Street parking spots are going for a cool $1 million.)

Michael K. Wolf, the chief administrative officer for SP+, said garages are on the decline due to “development of open lots and freestanding garages for commercial use [for buildings] such as residential and office buildings and boutique hotels. While some of those new facilities include garages, they’re usually much smaller. The net result is fewer spaces with more demand.”

Even when garages charge a hefty $75 a day for parking, fees can’t compete with development dollars.

“It is difficult to achieve a sufficient investment return by developing parking alone,” Mr. Wolf acknowledged.

Moreover, Mr. Wolf envisioned that those astronomical rates are likely to move in one direction: up.

“As supply goes down or as demand goes up, rates go up as well,” he stated.

Icon has been expanding, while Central and Standard have been shrinking. Icon expanded from 185 facilities to over 200 in the last few years while Central has dwindled from 250 garages to 191. Several calls to Icon went unreturned, until it finally said, “No one here has any comment at this time.” But clearly some garage owners are benefiting from these closures.

Ron Solarz, a commercial broker and executive managing director at Eastern Consolidated, said that not a week goes by that his phone doesn’t ring with a call from a parking lot owner who asks him to value his property.

“Developments are hot, rentals are hot, condos are hot,” Mr. Solarz said. “It’s a time when they are more valuable as development sites as opposed to being run as parking garages.”

Mr. Solarz noted that a neighborhood’s loss of a garage is offset when a new building is completed because some contain garages in the basement. But even he acknowledged, “We lose more parking spots than we build.”

The city needs to include promoting parking garages as part of new construction, Mr. Hollander said. “We need to create additional parking density in the new developments,” he said, to replace existing garages.

Some parking lot owners are devoted to their garages and don’t want to sell for a quick buck.

“There are many seasoned operators who want to continue to run their business,” Mr. Solarz noted.

But the dip in garages is no great shock to cognoscenti, explained Mitchell Moss, a New York University professor of urban planning and director of the Rudin Center for Transportation. “Garages have often been of transitory use. They occupy land between uses,” he said.

As more neighborhoods in the city become gentrified, developing parking lots is a natural outcome. Boston and Providence, for example, where land values haven’t skyrocketed, still see a plethora of surface garages being built.

As a result of the buying up of garages, innovative use comes into play. The garage at Pier 40 on Houston Street in the West Village is increasingly used by upper-income residents because there are few facilities remaining in the neighborhood, Mr. Moss said.

The shrinking number of garages is causing headaches for people who must drive into the city: commuters who drive in daily, tourists going to Broadway and suburbanites who use the hospitals that are far from the subway. “It could result in more competition for fewer spots,” Mr. Moss observed. In the future the surviving garages may serve as charging stations as more people turn to electric cars,” he added.

One West Village resident, Casey Seimaszko, an actor who appeared in Back to the Future and Damages, parks his Nissan truck at the Pier 40 garage. He’s fed up with rising prices and parking garage attendants. He’s exasperated by “Conventional lots that use attendants, move your car around or bury it in the back if you don’t use it often, then force you to call a day in advance to dig your car out.”

About rising garage prices, Mr. Seimaszko said, “It’s already too expensive.” He considers owning an automobile in dense Manhattan a “luxury item. I can and have lived without owning one.”

But technology could play a role in boosting business for garages and easing the pain for drivers searching for a coveted spot. Spot Hero, a start-up app that launched in Chicago, entered the New York market in 2013. It uses apps to connect drivers with the closest available garages (but no on-street parking) and offers selected discounts. “We help drivers in New York City find and reserve parking in advance by using our website or our free iPhone or android app,” explained Elise Fox, a spokeswoman for Spot Hero.

But Spot Hero is new to the New York market and only contracts with 200 garages or about 20 percent of the total. It doesn’t offer deals on any of the largest parking chains in New York but has partnerships with Rapid Park, LAZ Parking and InterPark, which offers discounts during selected time periods.

Mr. Wolf from SP+ said that markets have a way of correcting themselves. He anticipates that technology will encourage more people to telecommute and not have to drive to work, reducing the need for garages. The garages that endure will stay profitable, but he said he doesn’t expect many new stand-alone garages to be constructed.

Mr. Schwartz noted that New Yorkers are driving less than ever before.

“Every month I’m watching traffic volume go down; this started after the recession,” Mr. Schwartz said. “Hence, this won’t be a major hardship for most people.”

Moreover, he pointed out that if Google’s projections are accurate, in the next few years, your driverless Google car will let you off in front of your apartment building and park itself.