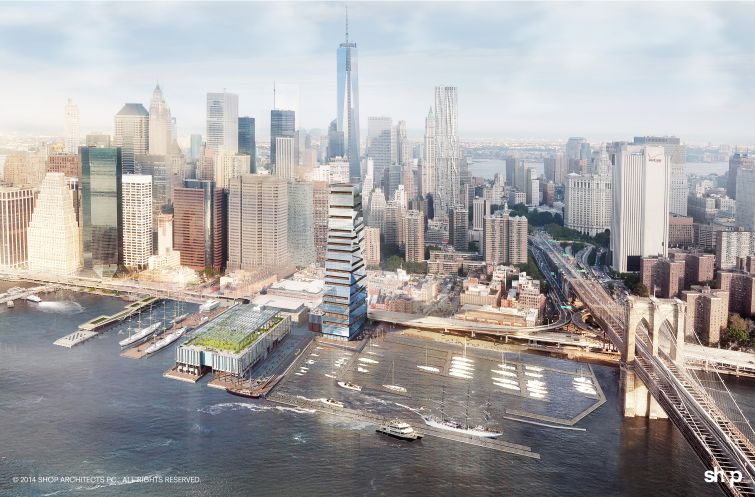 The Howard Hughes Corporation, in conjunction with SHoP Architects, publicly presented its plan for Lower Manhattan’s South Street Seaport this morning, a proposal which includes both the contentious mixed-use waterfront tower and $300 million in infrastructure and public improvements.

“We believe in this area. And we believe that the city deserves something better than what’s out there now,” said Gregg Pasquarelli, a principal at SHoP Architects.

SEE ALSO: Modular Construction Technology Comes Far and Fast During the Pandemic
Today’s presentation comes not without birth pangs; earlier this week The Wall Street Journal reported that the proposed waterfront tower was being scaled back from 52 to 42 stories to address the concerns of the pre-development Seaport Working Group, which met nearly a dozen times to discuss the future of the city-owned site (the Howard Hughes Corporation holds a long-term lease).

Perhaps in response to the backlash, today’s presentation emphasized the Howard Hughes Corporation’s commitment to the community; the firm sat on the pre-development Seaport Working Group, along with Community Board 1 members, Council Member Margaret Chin, Manhattan Borough President Gale Brewer, State Assemblyman Sheldon Silver and local business owners. The Howard Hughes Corporation stressed that this collaborative plan took into account the needs of a neighborhood battered by Hurricane Sandy and attempted to create a more natural flow from the Seaport to the rest of Manhattan.

“One of the things that’s a little strange about the [South Street Seaport] project is that it was built in the ‘80s when the city was a different place. So [then] it was almost about really separating itself from the city,” said Mr. Pasquarelli. “And I think what’s really important here is that we’re knitting this back together into the grid of the city itself.”

With this in mind, the proposal calls for Fulton and Beekman Streets to be extended past the FDR Drive, creating a loop linking the piers with the rest of the neighborhood.

The landmarked Tin Building, formerly home to the Fulton Fish Market, will also be physically lifted out of the flood plain and moved back thirty feet, creating a fully-connected East River Waterfront Esplanade to the Brooklyn Bridge and exposing a rehabilitated historic facade. The Howard Hughes Corporation estimates that expanding the East River Esplanade from the Seaport to the Brooklyn Bridge will cost the company $53 million.

The Tin Building, which has fallen into disrepair, will be rehabilitated by the Howard Hughes Corporation and will become a regionally and locally-sourced food market.

The most disputed element of the plan, which also functions as the economic driver of the South Street Seaport area, will be the mixed-use facility at the New Market building site, which includes a middle school and a community recreation space. The 42-story property, reduced 10 floors from its original design, is designated for market-rate housing.

But Mayor Bill de Blasio, known for his populist agenda, has no qualms about the tower situated next to the Seaport. Last week, Mr. de Blasio said at a press conference at the Spruce Street School, “I don’t have any philosophical prohibition in my mind about putting a tower next to a historical district.”

A separate, nearby development on Schermerhorn Row will be designated for affordable housing. Thirty percent of the total new residential units will be slated for such use.