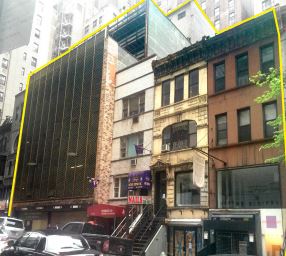 Gary Barnett‘s Extell Development is close to selling off a four-building site with 128,034 buildable square feet for around $80 million, Commercial Observer has learned.

The four contiguous buildings at 131-141 East 47th Street between Third and Lexington Avenues have a combined $80 million asking price, according to the Massey Knakal Realty Services marketing materials. The site includes an 11-story parking garage and three, four-story mixed-use walkup buildings. It is a ground-up mixed-use development site, which has garnered interest from hotel as well as residential developers, according to Massey Knakal’s Robert Knakal, who is marketing the properties with colleagues Clint Olsen, Jonathan Hageman, Ax Hayssen and Patrick Yannotta. Mr. Knakal expects to have a contract signed soon.

Sources with intimate knowledge of the deal said the asking price had been $81 million before being revised to $80 million.

The entire site will be delivered vacant.

“We’re selling a number of pieces of property,” Mr. Barnett said. “[These properties are] not strategic for us. They’re not that big. We have enough on our plate. We’re focusing on certain specific projects. We can’t do everything.”

Update: This story was edited to include a comment from Gary Barnett.