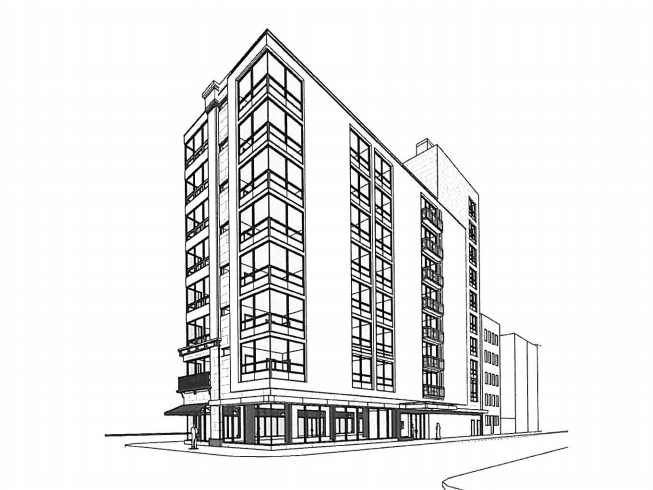 A rendering of the proposed development. (BSA/Rotwein+Blake) Tobias Salinger

Lloyd Goldman’s BLDG Management will formally apply later this month to build a $35.3 million, 46-unit residential building on the current site of a gas station in the East Village, according to an application document the developer filed with the city’s Board of Standards and Appeals and obtained by Commercial Observer.

The 5,874-square-foot site at 11 Avenue C sits on a trapezoidal lot between East Houston Street, Avenue C and East Second Street. The proposed 10-story, market-rate development would include 4,550 square feet on the ground floor and 3,300 square feet in the basement for a retail tenant, figures from an economic analysis attached to the application show.

Construction would begin in 2015 and proceed on a 14-month schedule if the one- and two-bedroom rental project gains approval from the board, said Caroline Harris, a partner at the Goldman Harris law firm who is representing BLDG. “They are applying for the variance since their economic study showed that a project built as-of-right on the site wouldn’t be economically feasible,” Ms. Harris added in a prepared statement. “We expect the Board of Standards and Appeals to approve the application.”

BLDG must petition the city for the variance in order to install the retail component and build out the oddly-shaped lot to full capacity, according to its application. BLDG officials hope to use an inclusionary housing bonus by paying for affordable units elsewhere rather than including them in the new project, the application says.

Ms. Harris will present the proposal, which doesn’t require City Council approval, to the board on Nov. 25.