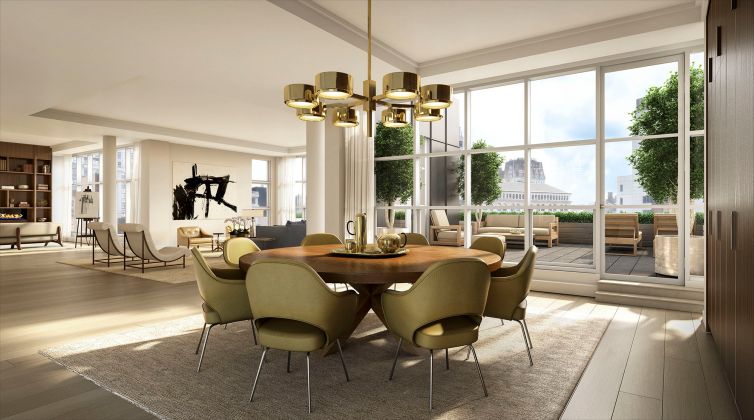 A rendering of a living room and dining area at the building. (CetraRuddy) Tobias Salinger

A former garage in Greenwich Village will welcome luxury condo residents in the spring of 2015 through a conversion by CetraRuddy. Developers DHA Capital and Continental Properties are turning 12 East 13th Street into an 8-unit residence and ground-floor retail property after the architecture firm designed a 4-story glass addition featuring terraced homes and a 5,700-square-foot penthouse with an asking price of $30.5 million, according to a listing on the condo development’s website. “We really wanted to plan each apartment so that they would have these magnificent living rooms,” said John Cetra, AIA, the founding principal of CetraRuddy. “It’s a building where I think the apartments really feel like home.”

The architects recladded the existing building with long and narrow Roman bricks and modified the industrial structure’s footprint. “It was built out into the rear yard quite a bit,” said Mr. Cetra. “We thought that we could improve the floor plate if we removed some of the rear area.”

The parking situation should please prospective residents, as a mechanized second-floor garage whisks cars away. “You can drive your car in, step out of the car and then your car will automatically be taken up to the second floor,” Mr. Cetra said. “I think that should be a marketable feature, given the lack of parking spaces in the city.”

Both the extension and the new orange-red and blackened-metal front of the building reflect the building’s previous use, Mr. Cetra said. “We removed the existing masonry and created a new façade, in which we paid homage to its industrial past.”