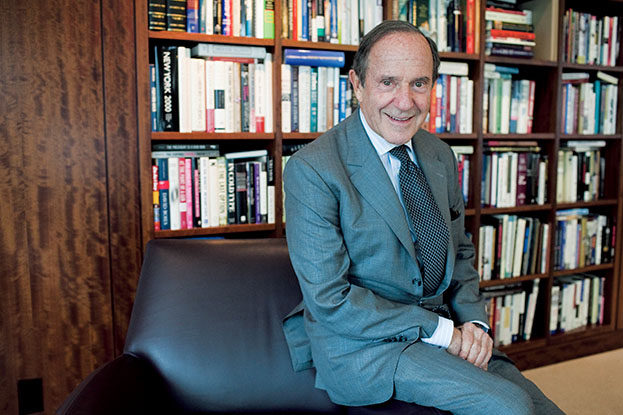 Next year marks the 45th anniversary of Mortimer B. Zuckerman, the chairman and CEO of Boston Properties, co-founding the storied real estate investment trust with his partner Edward H. Linde. Since then, Mr. Zuckerman has planted many seeds around the country, expanding the company’s portfolio to include high-profile properties in Boston, New York, San Francisco and Washington, D.C. Today, Boston Properties owns and operates some of the city’s most recognizable spaces, including the General Motors Building and the Times Square Tower.

Mr. Zuckerman, having also distinguished himself as a respected policy analyst and media mogul, sat down with Commercial Observer to discuss whether he had his eye on other properties around the city (answer: yes), what they were (answer: no comment), Mayor Bill de Blasio and the future of Midtown—home to all of his New York holdings — and “the most important property Boston Properties has ever built,” now under construction.

Commercial Observer: Next year will mark the 45th anniversary since you founded Boston Properties. How do you think the market for Class A buildings has changed in New York since then?

Mort Zuckerman: I think if anything, the market has expanded, both quantitatively and qualitatively, simply because the world of finance, which is the principle driver of all of this … has just exploded. So New York has been the beneficiary of it. A great deal of it has nothing to do with real estate. It has to do with pure talent. And there [are] huge reservoirs of talent in the financial world and the supporting legal world that centers in New York. It’s a city that attracts people like this because it offers all kinds of tangible and intangible qualities of life.

How many square feet of space do you own in New York City?

We have 9 million square feet of space in New York City. We have eight office buildings [all of which are in Midtown].

Which New York City property are you most proud of?

That’s such a good question. I would say two of them. This building [599 Lexington Avenue], it was the first building we built [in New York City; it was completed in 1986.] I have a special pride in this building because when the site became available and I made a commitment to it, I told my partner Ed Linde, who was an absolutely outstanding man, and he said to me, “What are you talking about? How can you do this? We don’t know New York.” I said, “Go down and take a look at it.” He took a look at it and he said, “You’re right.” And we built this building. It was just a wonderful experience for us to come into a market like this at a great site and a great building and it did very, very well.

But the other building I would have to say I am particularly proud of is the General Motors building.

Why the General Motors building?

What property of yours in the city do you think has the most potential?

Every single property we have has great potential. I don’t want to suggest one is better than the other. You could make different arguments for different buildings. What we do and try to do is to have A buildings in A locations in A cities. It’s a cliché, but it’s a philosophy that we’ve had and it’s a great feeling to be in that world.

Do you plan to invest in the outer boroughs?

Yes. We are looking at Brooklyn but have not done anything yet as we have concentrated our core on Manhattan. It’s not been our principal focus, which it is in every other market. [In other cities] we work both in the Downtown area and the surroundings.

Do you have faith in Midtown’s and New York City’s future?

Oh, for sure. New York City is still going to be the major center, as a financial center, as a legal center and as a city that is also developing a burgeoning high-tech community. New York City has good leadership at the level of the government. Its best days are ahead of it, not behind it.

What do you think of Mayor de Blasio’s rezoning plan for Midtown East, which would impact building restrictions, density and transportation in the area? Do you think it will come to fruition?

I don’t know whether it will come to fruition. [Mayor de Blasio] has lost a great deal of political traction in this particular period of time, and I have no way of being able to predict how it will come out. But, the fact is that New York City is going to really have to look hard at how it allows for the economic development of the city. And our economic development is not in the form of manufacturing. Our principal economic driver, of course, is the financial communities, the legal communities, the kinds of activities that generally take place in office buildings rather than in manufacturing plants. This has been true for decades, not just now. But we’ve been here for decades, and had that experience. And it’s very important that the business community and the political community know how to work together.

Did you think that former Mayor Michael Bloomberg’s proposal, which would have rezoned a 73-block area around Grand Central Terminal, would have been more impactful?

Let me just say this about Mike Bloomberg. The New York Daily News was the only newspaper to endorse him the first time he ran. And the reason why was because I had some exposure to him personally. We were both on the board of a nonprofit organization. And he was extraordinary by the standards of an elitist group of people. He’s just one of those unique leaders who has enough, shall we say, self-confidence in his judgment and in his commitment, that he can make a lot of things happen no matter what the clouds of naysayers [might want to do]. He really revitalized the city and revitalized the confidence of the residents of the city.

The Daily News was a pathfinder on that, because we were the only endorser. The endorsement … was critical to his election. And if I never do anything else with the New York Daily News, since I love this city, I will still rest a happy person. I think he was a terrific mayor. Not a perfect mayor, but a terrific mayor.

In a 2013 interview, The Washington Post asked you about your philosophy in investing in Washington, D.C. What’s your New York philosophy?

It’s the same philosophy. We have always believed in building and buying the best possible buildings that we were to get involved with, in one form or another. We’re at the upper end of the office building market, and always have been, whether it be in New York or Boston or San Francisco or Washington. The buildings we’ve bought and the buildings we’ve built are all at the upper end of the market. That is the market where we are able to provide the kind of facilities, in real estate terms, that [people] want. We obviously have a lot of experience doing it. We have found it to be a very good market to be in in good times. But equally as important, we have found it to be relatively the best market to be in in difficult times.

What do you have in the works in other cities?

We are now underway with what is going to be the iconic building in San Francisco and the most important building Boston Properties has ever built. This is the Trans-Bay development. It is 1,415,000 square feet. It will be 64 stories. I make it a habit to meet with all the office brokers, and when I was in San Francisco last year, it was one of the more extraordinary meetings I’ve ever had. I was interested in hearing about tenants who wanted 100,000 or more square feet. And they were reeling off company after company that I had never even heard of. [They were] almost all tech companies. It’s an absolutely astounding market. And there was no space for them. So we decided to acquire these two sites and build these two buildings. They’re both underway. The shorter building is virtually totally committed in one form or another. That’s the 310,000-square-foot building. But the 1.415 million-square-foot building now has a principal tenant who signed the lease for 715,000 square feet.

So is [Trans-Bay] the property you’re most excited about?

Yes. I think it will be the iconic building in San Francisco, sort of [like] the Empire State Building in New York when it was built. We’re absolutely thrilled about it. It’s a beautiful building. It’s already 50 percent leased, and we’ve just started construction.