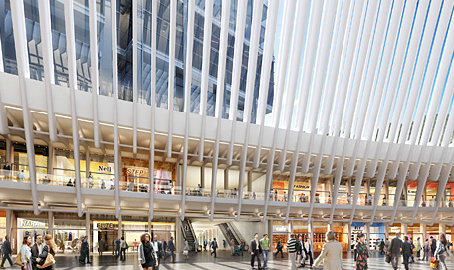 A rendering of the retail component of the WTC transportation hub. (Port Authority of New York & New Jersey)

Despite the fact that World Trade Center retail developer Westfield Group has yet to announce any tenants for the retail component in the Santiago Calatrava-designed Oculus transportation hub at the WTC site, the hub will open fully leased next year, a trio of CBRE retail brokers predicted earlier this week.

The global shopping center company that bought the eventual 440,000 square feet of retail space planned for the transit hub and towers 2,3 and 4 from the Port Authority of New York & New Jersey for $1.4 billion is looking for tenants who can offer omni-channel retailing, the new trend in which stores offer customers the ability to purchase products through a variety of mediums and devices, as well as a unique customer experience, the brokers said at a briefing for the media at CBRE’s Midtown offices.

“They want to create these prototype stores that are different from what normal stores have to offer so that they’ll draw people down there,” said CBRE executive vice president Amira Yunis.

Westfield has included an omni-channel requirement in its leases for the WTC spaces, said Ms. Yunis’s colleague, CBRE executive vice president Richard Hodos. Although the fact that the spaces won’t be larger than 14,000 or 15,000 square feet means that the large-scale department stores popping up at nearby Brookfield Place and elsewhere in Manhattan won’t emerge from Westfield’s WTC spaces, Westfield is planning a mixture of tenants marked by “diversity,” Mr. Hodos said.

“It’s really a story of a wide complement of retailers who do luxury and retailers who service the office population,” Mr. Hodos said.

Westfield officials didn’t confirm the leasing requirement or the square-footage figures and declined to state asking rents for the spaces, but they said they anticipate the complex they’ve dubbed Westfield World Trade Center will open in the fall of 2015 and noted that the company has made significant progress toward filling out its retail roster for the property. The property will feature “a diverse mix of 150 global and local, fashion, lifestyle, technology and culinary brands,” and both “casual and upscale dining,” promotional materials distributed by the company indicate.

Westfield counts some 450,000 professionals in Lower Manhattan and  11.5 million visitors to the area last year. And figures like that make retailers attracted to the area, said Andrew Goldberg, a vice chairman at CBRE.

“It’s a major market,” Mr. Goldberg said. “You’re going to have tourists down there that you’ve never seen before. It’s going to be like a whole new city.”