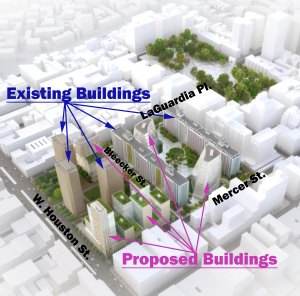 The lay of the land. (Greenwich Village Society for Historical Preservation)

A panel of judges in the State Supreme Court’s Appellate Division today reversed a previous ruling that put large portions of New York University’s contentious $6 billion 2031 expansion plan on hold. The appellate decision takes issue with Judge Donna Mills’ January finding that four Greenwich Village parcels, which the city had previously turned over to NYU, constituted “implied” parkland and thus could not be ceded (“alienated,” in legal parlance), to the university without a vote in the state legislature. Judge Mills’ ruling gave the go-ahead to the university for only one of four planned buildings—which had become the target of a lawsuit filed by Assemblywoman Deborah Glick, Community Board 2, local residents and the Greenwich Village Society for Historic Preservation (GVSHP), among others—while pumping the proverbial brakes on the other three.

SEE ALSO: Flexibility the Name of the Game for US Colleges Post-COVID, CO Panelists Say