Experts Pen Book on Rise of Urbanism and Future Challenges 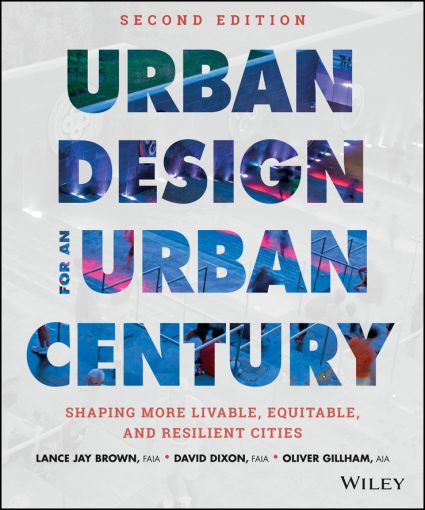 Urban planning experts Lance Jay Brown, FAIA, David Dixon, FAIA and the late Oliver Gillham, AIA, trace the rise of planned cities from ancient locales like the Greek city of Miletus through the decay of the suburban period and all the way to today’s urban renaissance in an illuminating second edition of their book “Urban Design for an Urban Century” that the Wiley publishing company released earlier this year.

The update to the 2009 text–by Mr. Brown, the founder of an eponymous architecture firm and the current president of the American Institute of Architects‘ New York Chapter, Mr. Dixon, a senior principal at the Stantec company, and Mr. Gillham, an architect and planner who once wrote “The Limitless City: A Primer on the Urban Sprawl Debate”–marshals a series of figures and case studies to make a forceful argument about both the success of today’s burgeoning urban environments and the challenges posed by the current move back to the cities in a way they say should prove instructive to real estate professionals, policy-makers, architects, designers, students and the general public.

“A central point of the book for any and all audiences is that we are not creating great walkable urban places today because we are smarter, but because [walkable urban places] respond to who we are today,” Mr. Dixon wrote in an email. “Long story short, the book is intended to send the message to planning officials, developers, elected officials and professionals that they have not necessarily been wrong for the past 50 years, but times have changed, and so should our decisions about city-building.”

Generational trends that show millennials driving less and streaming into public-transit-oriented cities and baby boomers looking to sell off their idyllic suburban homes are contributing to the shift back to cities from the urban renewal period of highway-building and brutalist architecture in which builders and planners awarded cars a superior status to people, the authors argue. The 23 largest metropolitan areas in the United States will take on more development in the three decades between 2010 and 2040 than the same 23 cities did in the six decades between 1950 and 2010, according to research cited in the book.

“The next round of growth will not only be intense, but it will also take a profoundly different form,” the book says. “The undeveloped greenfields that accommodated the bulk of development for the last half of the twentieth century will give way to more concentrated development on grayfields and brownfields in the twenty-first.”

Yet, for all the book’s colorful renderings and pictures of modern urban spaces like Manhattan’s High Line park and Brooklyn’s Barclays Center, the authors point out the dilemmas evident in housing and educated worker shortages that could become acute and economic inequality that’s enhanced by the increased appeal of cities. The number of jobs in America requiring a two or four-year college degree will rise to 63 percent of the total available job market by 2018 while less than 40 percent of workers boasted such attributes in 2010, according to the book. And despite a projected supply of 52 million units of transit-enhanced housing by 2040, the actual demand for such units will call for 68 million units by that date.

Another factor, the stagnating real income since the early 1960s for the country’s lowest 40 percent of households, will create strife and social problems in the current era of urban growth where the poor must increasingly look for homes in the suburbs that aren’t connected with this new urban world, the authors write.

“Ironically, as planners and designers help cities broaden the appeal of their urban centers to well-educated, higher-income residents, they aggravate the impacts of economic inequality,” the book says. “This challenge extends far beyond the realm of urban design, but that doesn’t absolve urban designers of the responsibility to address it.”