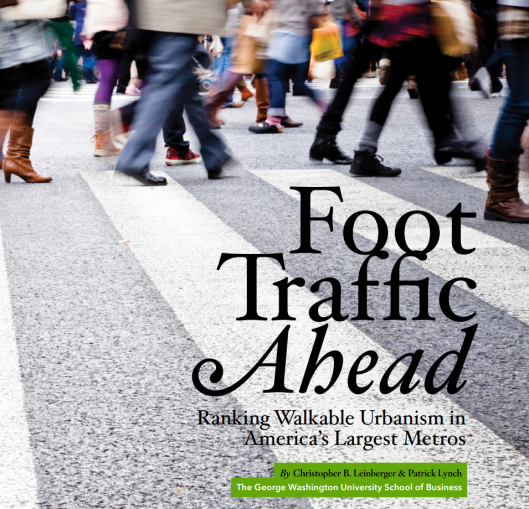 Pedestrian-friendly suburbs surrounding the nation’s capital have given Washington, DC an advantage over New York City that should prove instructive to the Big Apple’s real estate industry professionals, according to a new study released in June by researchers at George Washington University School of Business called “Foot Traffic Ahead.”

While New York City boasts the most areas defined by a formula measuring what the report refers to as “regionally-significant, walkable urban places” with more than 1.4 million square feet of office space, over 340,000 square feet of retail space and high marks for the neighborhood’s use by walkers, a larger percentage of DC’s office and retail space rises up in so-called “WalkUPs,” offering developers in the area the opportunity to command higher relative rents outside the city’s center, said the head of the GWU Center for Real Estate and Urban Analysis, former real estate developer Christopher Leinberger.

“New York is at one extreme; Washington is at the other extreme,” said Mr. Leinberger, one of the report’s authors, about data finding much more of DC’s walkable urban areas in the suburbs than that of New York City. “I believe the future, based on my research throughout the country, belongs to the urbanization of the suburbs.”

So, while New York City enjoys 66 of the walkable spaces–the most of any of the country’s 30 largest cities and nine more than the nearest competitor, San Francisco–all but 11 percent of the pedestrian-friendly areas show up within the city’s limits, particularly in Manhattan, which makes up only 0.3 percent of the region’s landmass, according to the report’s findings. DC, on the other hand, has 51 percent of its urban walkable spaces in its suburbs.

Though no other city’s pedestrian areas provide the 206 percent rent premium over driving suburbs that’s evident in New York City, the area’s real estate industry could ramp up profits by boosting development in the Long Island and New Jersey ‘burbs, Mr. Leinberger said.

“It’s a great opportunity that you’re missing that’s hurting your economic development significantly,” he said. “You’ve got to offer the market what it wants, and that’s the urbanization of the suburbs.”

But New York City’s broad swaths of urban space do place it far ahead of less-populated, suburban-sprawled locales at the bottom of the list. By finding a correlation between the so-called “WalkUPs” and both gross domestic product and educational attainment, the report also shows how the city’s urban spaces relate to its economic health.

“New York is by far the largest walkable city in the world,” said Josh Kuriloff, executive vice chairman of Cushman & Wakefield, in a prepared statement. “The highly educated millennial generation is attracted to environments that have a diverse culture, a 24-hour community, a city with museums, theatre and music. Parks and green space are abundant in this great city.”