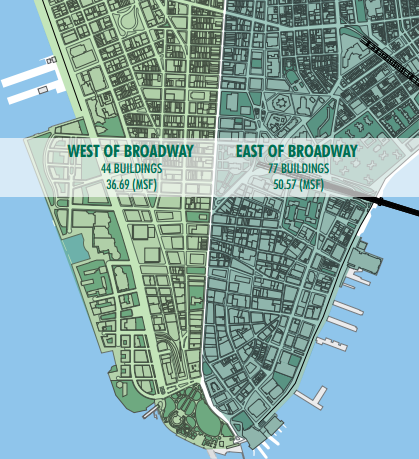 Click to Enlarge: East of Broadway has more inventory than West of the thoroughfare. (CBRE)

Analysts at CBRE found that one of New York City’s most famous corridors divides the hot downtown commercial market between one area with more inventory and another with higher asking rents, according to a report the company will release later today.

“It involves brand new architecture and construction, as well as the amenities of both the World Trade Center and Brookfield Place retail complexes; That’s the main difference,” said CBRE Executive Vice President of brokerage services Bruce Surry. He added, “The east side is more of the value play. That’s where you’re getting the better deal in terms of the asking rents.”

While west of Broadway attracted the greater share of tenant relocations from outside the downtown market since 2011, leasing out 3.10 million square feet of space to the east side’s 1.32 million square feet, both markets are thriving, the report concludes.

“Despite the differences between these two ‘halves’ of downtown, both [east of Broadway] and [west of Broadway] have experienced a surge in investment activity,” the report says. “Both sides of Broadway will continue to provide value to downtown’s recent renaissance as a premier office market.”