Inside Hudson Park and Boulevard 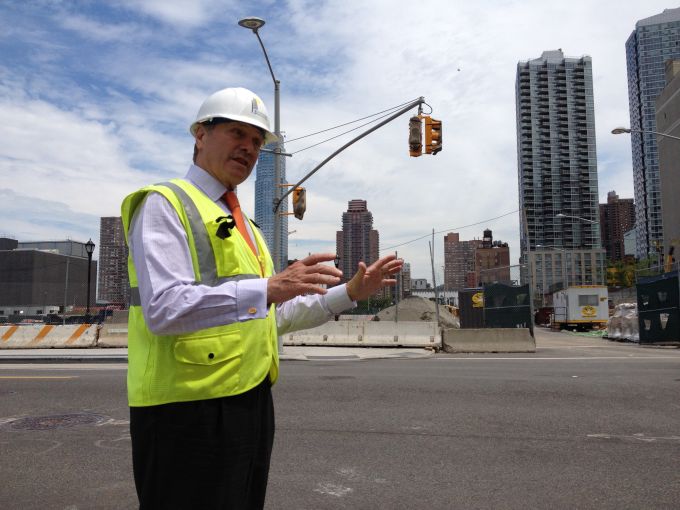 Aron Kirsch of Moinian Group and Arthur Mirante of Avison Young opened the two-acre construction site at the Hudson Park and Boulevard adjacent to the planned 1,050-foot 3 Hudson Boulevard for a hardhat tour at Hudson Yards today.

Avison Young is marketing the Moinian Group’s 1.8-million-square-foot tower with a flexible asking rent starting at $85 per square foot, and the glass structure will start rising up next to a public park and an entrance to the new 7 train subway station as soon as Avison Young signs an anchor tenant at the property, Mr. Mirante said.

“Think about the scale and then think about this extension,” said Mr. Mirante, referring to the way the High Line will snake up to the Hudson Yards district from Chelsea while leading a pack of reporters through the eventual four-acre park. “Suddenly you not only have a plaza in front of your office, you have a park. You can take a nice walk, a real walk, through the park, then sit and have your lunch.”

Media companies and financial services companies are inquiring about the property, Mr. Mirante said, and rent prices will hinge on companies’ credit and their space and infrastructure needs, with the city offering up a 20-year subsidy which would net a 500,000-square-foot tenant approximately $100 million.

Mr. Mirante expressed confidence he could sign an anchor tenant in the next six months for the spot where Metropolitan Transportation Authority construction workers were digging out the first phase of the foundation.

“We’re working on it,” Mr. Mirante said. “We need an anchor tenant. Sign a lease now and the building can be built in 30 months.”