Terra Capital’s Bruce Batkin: An Exit Strategy for Every Loan 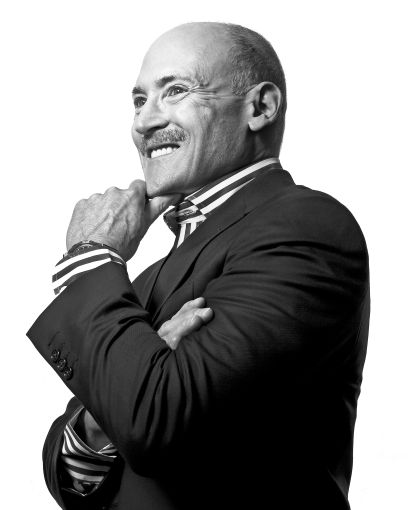 Bruce Batkin and his colleagues at Terra Capital Partners are “not loan to own,” the seasoned mezzanine lender says emphatically, using the industry-speak for firms that lend with the hope of taking control of a property. In fact, the 61-year-old Harvard Business School graduate and the company are the exact opposite. They have never once witnessed a borrower fail to make a payment on time.

“It’s always gratifying to get up in front of investors and reporters and say, ‘We’ve never had a monetary default,’” Mr. Batkin, the firm’s co-founder and chief executive, tells Mortgage Observer on a June evening in his Midtown office. “How many people can say that having financed close to 300 properties? We’re driven by the maintenance of a reputation that’s unblemished to date.”

In Terra Capital’s mostly white, minimalist office space, decorated with select architectural photographs and works of abstract art, his affinity for exactness is clear. Printed files are neatly arranged on his desk, and he keeps a folder of client-approved deals spanning roughly 12 years on his computer.

“I’m pretty compulsive, and I tend to err on the side of perfectionism,” the Long Island-born executive says. “Everything we do is to a certain standard, which we try our best to maintain with borrowers, investors, brokers, senior lenders and everyone else we work with.”

Mr. Batkin’s knack for mezzanine finance, in which a lender can charge a higher rate for a subordinate piece of debt and take ownership or equity interest in the asset if the borrower falters, comes from more than 30 years in the real estate business on multiple sides of the playing field.

For Mr. Batkin, successful mezzanine lending requires precise timing with an exit strategy and a safety net on every deal, in addition to careful vetting, tenacious relationships with borrowers and other lenders and a little luck. It’s an entrepreneurial and opportunistic practice. The best mezzanine lenders help fill a void—often in secondary markets such as Fort Washington, Pa., and Spartanburg, S.C., where Terra Capital has lent—when banks are unwilling or unable to complete the capital stack.

In recent years, he and his team of 34 employees have benefitted from bank regulations, including Dodd-Frank and Basel III, which require banks to hold more capital on their balance sheets, and also from the country’s low interest rates, which have become something of a post-crisis legacy. The regulations have increasingly left holes for them to fill, while low rates mean borrowers can afford more mezzanine debt and preferred equity when needed, Mr. Batkin says.

The growing mezzanine shop, which has one office in New York and one in Los Angeles, typically originates loans around the $10 million mark with interest rate pricing between 10 and 15 percent. But, unlike some of the 12-year-old company’s direct competitors, Terra Capital has never had an incentive for property ownership.

“We only lend on income-oriented, stabilized properties—no construction,” says Mr. Batkin, who evokes shades of Ernest Hemingway with his fondness for overseas travel, minimalism and boxing—which he trains in during his spare time. “In case we ever have to step in, we won’t lend on anything we wouldn’t want to own and operate.”

Among the firm’s more intricate deals was a two-year loan of up to $12.5 million, with the option of future funding, on a four-story office property at 1733 Ocean Avenue in Santa Monica, Calif., which Terra Capital closed this March. The mezzanine debt was structured to coincide with the maturity of a $33.5 million senior loan from RBS Greenwich Capital on the property. Both loans are due to mature in early 2016, says Steve Mlynarczyk, vice president of the building’s ownership firm, Maguire Investments.

The Los Angeles-based real estate investment firm reached out to Mr. Batkin and Doug Vikser of Terra Capital’s Los Angeles office after the building’s anchor tenant, the nonprofit global policy think tank RAND Corporation, relocated to another space in Santa Monica. At that point the owners decided to reposition their property to attract a replacement tenant at a higher rent. The mezzanine loan from Terra Capital provided the necessary funding to do so while “allowing for a clean, straightforward refinance” in 2016, Mr. Mlynarczyk notes.

“I’ve never seen a lender go to the lengths they did,” says Maguire Investments’ chief executive Robert Maguire. “Bruce asked every question you can imagine on the property, on the market and on the structure of the ownership. I would kid him about it and say, ‘C’mon, what possible use is that?’ He would laugh and then still go through with the due diligence from start to end.”

Mr. Batkin, who began drafting commercial and residential floor plans at age 7, had intentions of becoming an architect from childhood to the end of college. Then after he graduated from Cornell University in 1976 with a five-year degree in architecture and several completed internships in the field, something clicked. Opportunities in real estate finance suddenly seemed brighter and potentially more engaging to him. “I had a financial side of my brain that I didn’t think was being fully utilized on the architecture side,” he says.

Mr. Batkin quickly went on to pursue his master’s in business administration at Harvard and began his post-graduate school career at Chase Manhattan Bank in 1978. Following a 15-month training program at the bank, he landed a job in commercial real estate lending, in which he helped finance construction projects on behalf of Texas developers such as Hines, Transwestern and Trammell Crow.

From there Mr. Batkin took a position in equity investment syndication at Merrill Lynch, where he stayed for 10 years.

“That was actually a model for what we do here today,” he says. More immediately, his experience at Merrill led to a job in commercial real estate banking and CMBS lending at the former investment bank Donaldson, Lufkin & Jenrette, where he worked with some of the first REITs in the early 1990s. Following that, Mr. Batkin landed a senior role at the Dutch bank ABN AMRO for two years, running its global real estate investment arm, and went on to dabble in a few entrepreneurial endeavors, including personal real estate interests, before co-founding Terra Capital with his partner Simon Mildé in 2002. The two met at Harvard in 1978 and kept an informal business relationship over the ensuing years.

Terra Capital—terra being the Latin word for “land”—now exists in its “second incarnation,” Mr. Batkin notes. The firm’s first phase included a joint venture with the Sydney-based investment firm Rubicon in 2003 to raise equity in Australia for a series of U.S. mezzanine funds as well as a private REIT that acquired U.S. government-leased office space. That REIT grew to own a total of 6.5 million square feet of real estate. “If you’ve never owned and operated properties, you probably shouldn’t be a mezzanine lender, because you’re really not well positioned to take over properties,” he says.

The mezzanine shop’s first incarnation lasted until June 2007. By that point Mr. Batkin and Mr. Mildé saw signs of a potential market collapse and made a bold move: selling their interests in all of the firm’s assets, including the government-leased office space, to Rubicon.

“We became uncomfortable with the way the market felt in terms of property values rising too quickly and too much credit being available,” Mr. Batkin says. “And we found that we were increasingly uncompetitive when we would bid on mezzanine deals.”

The two partners and their employees stayed out of the mezzanine business until July 2009, but none of them spent that two-year break sipping cocktails on a remote beach, according to Mr. Batkin. “I put together a business plan beginning in 2008 for us to reenter the market, and I also made personal investments,” he says. “We kept our offices, we kept our people and we kept paying salaries. We went to cash and we waited.”

Mr. Batkin’s and Mr. Mildé’s understanding of full market cycles and the firm’s “pristine track record,” a result of careful market timing, laid the groundwork for Terra Capital’s second phase, Mr. Batkin explains. Those factors have also allowed for steady growth over the past five years.

“We now distribute our funds through 20,000 financial advisers around the country,” he says. “There is a big and very deliberate infrastructure that we have created here. We have invested in 35 states.”

Still, Terra Capital picks its deals in those markets with a seemingly obsessive eye. In November 2013, the firm lent $14 million on an 80 percent vacant office building in downtown Nashville, known as UBS Tower, to help reposition and re-lease the 600,000-square-foot building. Doral Bank provided a $24 million senior loan on the 29-story skyscraper. “The basis in the property is a fraction of reproduction, and we like the business climate and growth potential in Nashville,” Mr. Batkin says.

The mezzanine lender’s penchant for exact detail—to the point of perfectionism—shows in his demeanor and everyday conversations, says Robert Brennan, senior managing director at Guggenheim Partners and head of the global investment and advisory firm’s commercial real estate finance group. The two had worked together at DLJ in the early 1990s, helping steer their respective teams through the tail end of the savings-and-loan storm, Mr. Brennan recalls. They later reconnected in 2010, soon after Mr. Brennan joined Guggenheim, and have collaborated on multiple deals since.

“I like doing business with Bruce because he’s straightforward, committed on every deal he agrees to and observant about what’s going on around him,” Mr. Brennan says. “When things go sideways, it isn’t guns blasting and different sides shouting, ‘You changed! You suck!’ There is always a rational response to the usual amounts of adversity that pop up in complex real estate transactions.”

Mr. Batkin’s contained anxiety is, in part, driven by his belief that market conditions can change and transactions can go sour before the majority notices. “He can be a persistent pain in the ass, but you wouldn’t want him any other way,” Mr. Brennan says with a laugh. “He’ll call me 30 times on a deal and I’ll say to myself say, ‘Okay, I need to take his call. I know what he needs me for right now.’”

No economic cycle is exactly the same, but the themes often repeat themselves, Mr. Batkin notes, in reference to his high level of caution.

“For any smart company that wants to stay in business, it’s often change or die,” he says, after taking a moment to confirm with an employee that a loan in the works was precisely priced. “What we’re doing now is transitioning so that more of our portfolio will become transitional or even non-income producing land than in the past. We feel more comfortable that development is beginning to take place and that hiring is beginning to increase.”

Mr. Batkin takes the conversation several steps further and acknowledges that he and his team may eventually leave the mezzanine market entirely if deals become too unpredictable and risk and reward no longer seem matched. If that day comes, he says, the company will once again sell off its loans and “go to cash.”

“Our exit strategy is simple: we’re not going to stay too long at the party,” he tells Mortgage Observer as city lights silhouette several Manhattan development projects surrounding his eighth-story office window, many of which took mezzanine loans to get off the ground. “We’re constantly looking over our shoulders, trying to look ahead and saying, ‘Should we be doing something different?’ Anyone who gets entrenched in one business and figures that they are going to stay in that business forever better think again.”