Retail in the (East) Bronx Is on Fire 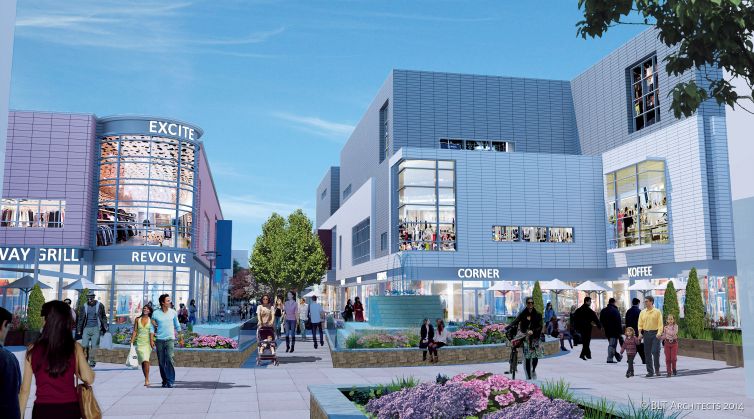 Up until the late 1980s, people in the East Bronx had to drive to Westchester to find the closest mall. Then, in 1988, Bay Plaza Shopping Center was built, and now has  more than 50 department and specialty retailers ranging from J.C. Penney to Daffy’s to Applebee’s. Now, the mall’s developer, Prestige Properties & Development, is expanding the center with what it boasts is the first new, suburban style enclosed fashion mall in the New York City area in four decades.

With a population of 1.4 million people, the Bronx is the third most densely populated county in the country, according to United States Census Bureau data. (New York and Kings Counties take the top two slots.) The density is a factor that many retail pros pointed to as a reason for the current retail boom—that and the fact that five years after the nadir of the recession the economy has picked up steam in a borough still synonymous to some with urban decay. All of this activity is fitting this year, as it’s the 100th anniversary of the Bronx’s incorporation.

“Because of the [bad] economy, there was no retail expansion,” said Drew Greenwald, a principal at Grid Properties, which along with Gotham Organization is developing Gun Hill Square on the 12.5-acre site of a former driving range near the Gun Hill Road depot. Now that retailers are starting to talk about opening new locations, the developers are following suit.

On the west side of I-95, Gun Hill Square will be a 350,000- to 425,000-square-foot, two-story, pedestrian-focused retail project comprised of “six mini-blocks,” Mr. Greenwald said. Grid and Gotham were selected last year through a city request for proposals process to develop the Metropolitan Transportation Authority site in the Pelham Gardens neighborhood. The deal hasn’t closed yet, so Mr. Greenwald declined to disclose the purchase price.

“There are tenants that are needed,” Mr. Greenwald said. “It’s a proven retail location. The other side [of I-95, which is home to Bay Plaza] does amazing numbers.”

He envisions shoppers hailing from the Bronx and lower Westchester County parking, walking around, eating lunch, shopping, getting an ice cream and then departing.

While Bay Plaza is a strip mall, at Gun Hill Square, Mr. Greenwald described what will be a “very creative urban pedestrian experience.”

On the east side of I-95 near Co-op City, Prestige Properties is developing the $300 million, 780,000-square-foot, indoor Mall at Bay Plaza. Prestige also developed the adjacent Bay Plaza Shopping Center. The Mall at Bay Plaza has its grand opening on Aug. 14, the landlord’s representative, Jerry Welkis of Welco Realty, previously told Commercial Observer.

“[The Bronx is] the only borough without an enclosed fashion mall,” Mr. Welkis said.

A new three-level, 160,000-square-foot Macy’s and the existing free-standing 166,000-square-foot J.C. Penney will anchor the mall. The Macy’s department store—the first new ground-up New York City Macy’s in decades—is slated to open on the same day as the mall, a Macy’s spokeswoman said. It will be connected to J.C. Penney so that the department store can be entered via any of its three floors.

Macy’s is returning to its roots in a way. After opening Macy’s Herald Square in 1902, the company “expanded” with the opening of the Parkchester, Bronx, location in the 1940s, said Elina Kazan, the spokeswoman for Macy’s. And now the department giant is returning to the Bronx to expand.

“The Co-op City area and the Mall at Bay Plaza [make up] a very dynamic area,” Ms. Kazan said. Co-op City, located in the Baychester section, is the largest cooperative housing development in the world and is often called the City Within the City.

The two Prestige Properties malls won’t be competing against each other since the open-air Bay Plaza Shopping Center is more value-driven, Mr. Welkis said, and the existing mall is “primarily a big-box outdoor power center.”

David Scotto, a vice president in the retail division at NAI Friedland, described a confidence in the Bronx, where he said larger scale retail developments are fetching between $80 and $100 per foot asking rents.

“The national retailers are seeing potential, because the sites are more affordable than in Manhattan and you have a great amount of population density here,” he said. “They are seeing value in it.”

Similarly, Todd Cooper, a broker with Ripco who is co-marketing Gun Hill Square and Throggs Neck Shopping Center, said, “If you look at the suburban retailers you see over and over in different suburbs, a lot of them realize they can do business in the Bronx, and there’s a demand for space.”

At 815 Hutchinson River Parkway in the Ferry Point section is Simone Development’s two-story, 285,000-square-foot Throggs Neck Shopping Center. It is 75 percent leased to a mix of local and national stores and restaurants, the developer said. The center, anchored by a 165,000-square-foot Target department store, is at the intersection of Lafayette Avenue and the Hutchinson River Parkway.

Mr. Kelleher, who is also on the Bronx Chamber of Commerce’s board of directors, is hopeful that plans for a ferry between the Southeast Bronx and Midtown will materialize along with the Metropolitan Transportation Authority’s idea of sending Metro-North trains from Penn Station to four new stations in the East Bronx—in Hunts Point, Parkchester, Morris Park and Co-op City—via the Amtrak rail line by 2019.

Simone Development is also constructing a seven-story, extended-stay Marriott Residence Inn as part of the 42-acre Hutchinson Metro Center, a mixed-use campus at 1250 Waters Place, off the Hutchinson River Parkway in the East Bronx, as Commercial Observer previously reported. The hotel is slated to open in September at teh site of the Old London Bakery. While much of the project is leased to office, retail and medical tenants, there is room for future development at the site.

A two-story Woodbury Common Premium Outlets-type complex, called Paragon Outlets NYC—its namesake is Lightstone Group’s outlet mall developer Paragon Outlet Partners—is slated to be built at 2505 Bruckner Boulevard, home to the Whitestone Multiplex Cinema, in the Castle Hill section. Lightstone acquired the 19.2-acre site in May 2012 for $30 million, and a Lightstone spokesman said Lightstone is in talks with prospective retailers to ink deals for the 375,000 square feet of leasable space. Lightstone declined to comment. This will be the first outlet mall in New York City.

Mr. Greenwald said outlets are a smart choice for Paragon Outlets NYC, because the location is not easily accessible via public transportation. Mr. Kelleher celebrated the idea of an outlet center to draw outlet shoppers who currently schlep out to Woodbury Common north of New York City.

While the other boroughs, particularly Manhattan, Brooklyn and Queens, have seen their share of development, Bronx County has remained something of an ugly stepchild. But transplants who migrated to the Bronx to capitalize on cheaper housing options want the East Bronx to be more of a 24-7 community.

“When you look at all of the things that are going on here, 10 years ago, a lot of this wasn’t happening,” Mr. Kelleher said. “I can tell you that over the next 10 or 15 years this whole area is going to go through an economic explosion.”