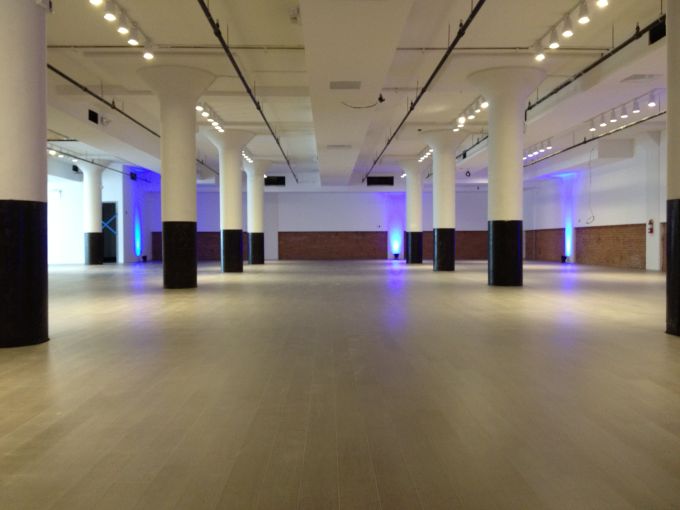 During an open house event that’s running through Thursday on the property that the tenants are turning into a bamboo-floored and LED-lit event space modeled after its successful Chelsea location, the Metropolitan’s vice president Shelly Taggar and president Alan Boss showcased the $2 million transformation they say is on track to be completed by September.

“We had to make it fit for humans,” said Mr. Boss. “It was pretty neglected over the years at H&H. And if you would have seen what we saw when we came here, you would have never bought a bagel.”

The building, where one of the two floors is still a construction site, will feature a renovated façade, a chandelier with two light fixtures that look like the planet Saturn and enough floor space for a collective 1,500 people. The company will ask for a $16,500 base rate to rent the entire building for a day, according to its brochure, with extra charges for table, staffing and beverage packages. Ms. Taggar said Metropolitan expects to attract everything from office parties to fashion shows and sample sales as Hudson Yards takes shape a few blocks south.

“We just like to make it clean and open because all of the clients want to make it their own,” said Ms. Taggar. “All of our spaces are built a lot like blank canvasses.”

But even without Hudson Yards, the space that currently sits next to car repair shops, dance clubs and the Intrepid Sea, Air and Space Museum would be successful, said Adam Smith, the director of real estate at MKF.

“We envision that this can really become a vibrant destination in Manhattan,” said Mr. Smith. “We think that there’s a lot of positive attractions that this neighborhood has and I don’t think it’s going to be auto shops and garages forever.”

H&H once commanded a large and faithful following, and the fresh-made bagels gained national fame on Seinfeld when Kramer returned to work at an Upper West Side H&H store after a long walkout. The former owner of H&H issued a cease-and-desist letter to another bagel franchise owner who tried to open new bagel stores under the same name in 2012, the Wall Street Journal reported.