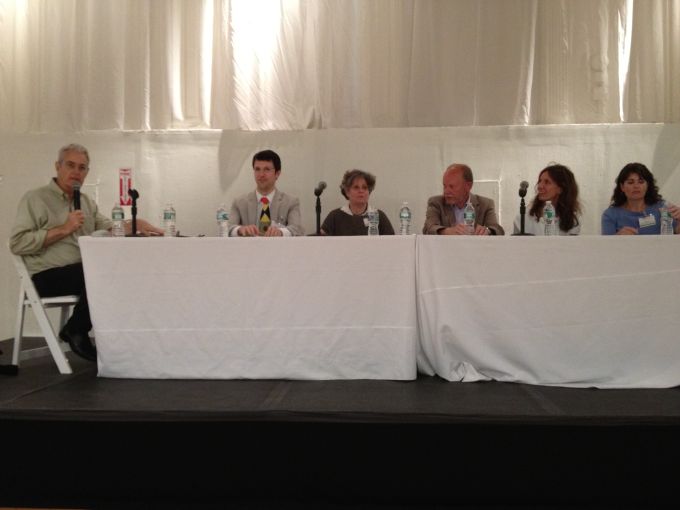 A panel discussion led by William Menking of The Architect's Newspaper

Hundreds of architects, builders and advocates called for residential and commercial buildings of all sizes to consume 75 percent less energy in order to live up to so-called “passive house” standards at a convention yesterday.

The New York Passive House conference and expo at in the Flatiron district attracted both a local and international crowd of those interested in perfecting and popularizing the strict German specifications that make use of controlled ventilation, air-tight installation and innovative façade design to reduce energy costs and usage by massive amounts.

“If architecture is about generosity, then we are probably just doing our job,” said Sabrine Leribaux, an architect with a Brussels-based company called Architectes Associes that operates in a city where all new and significant renovations must adhere to passive standards starting in 2015, in a speech during the daylong event. She added afterwards, “You just have to lift that security lock. Passive house is not European. I grew up in Texas.”

Leribaux and Günter Lang, of the Vienna-based Lang Consulting, presented stunning pictures of completed passive house projects ranging from private homes to large-scale multifamily and commercial developments and passive office skyscrapers to show the prevalence of an architectural movement which they say is becoming the norm in Europe and ought to become the norm here in the city.

Mr. Lang, a forceful advocate from a country that has both a passive court building and a hyper-efficient prison, showed a picture of the 21-story passive bank tower that’s now standing by the Danube River where an Organization for the Petroleum Exporting Countries building once dominated the landscape.

“It’s crazy the buildings you build here,” Mr. Lang told the audience. “It’s absolutely stupid. And it has to change.”

But things might very well be changing, if the specialized devices and goods on display at the expo are any indication. An Austrian company called Internorm was showing off its triple-pane windows, a staple of passive houses, while a Florida-based firm known as American Aldes showed off its “constant airflow regulator” and “energy recovery ventilator” equipment to a technical crowd eager for details.

“We sell these things in the New York area for commercial buildings and high-end residential all the time,” said Aldes’ Jose Castro, who pointed to passive house features in the upcoming expansion of the Museum of Modern Art.

Other New York City examples include two new multifamily affordable housing complexes completed this spring in Bushwick, Brooklyn by Architecture and Energy Limited architect Chris Benedict, who outlined plans for a 40-unit rental building planned for West 153rd Street in Manhattan during another presentation yesterday. The conference’s participants are pushing for developers and builders to construct more and more passive buildings all over the city and throughout the country in order to combat climate change.

“They’re either going to be known for building the buildings that address the defining issue of our time or they’re going to be building the last ones in the old way,” said Ken Levenson, president of New York Passive House. “If you build the way we’re building now, 10 years from now, you won’t be proud of it.”