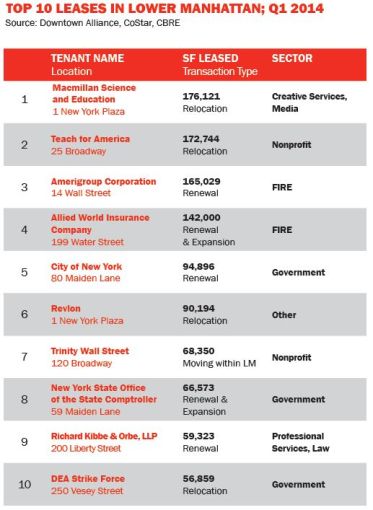 First-quarter commercial leasing in Lower Manhattan was up 18 percent year-over-year, according to a first-quarter report from the Alliance for Downtown New York.

“Recent activity shows a strong and continued appetite among existing tenants and those new to the market who are taking big blocks of office space,” the report says.

Macmillan Science and Education relocated to 176,121 square feet at Brookfield Office Properties’ 1 New York Plaza, marking the largest lease of the first three months of the year. The 16-year lease covers the 46th, 47th and 48th floors, as well as a portion of the 45th, as Commercial Observer reported when the deal was in late-stage negotiations. Asking rents were $50 per square foot, sources told CO at the time.

That lease was followed in size by educational non-profit Teach for America‘s 172,744-square-foot relocation to floors 11 to 14 in 25 Broadway.

Commercial leasing totaled 1.6 million square feet in the first quarter, representing the best quarter in more than a decade, the report says.