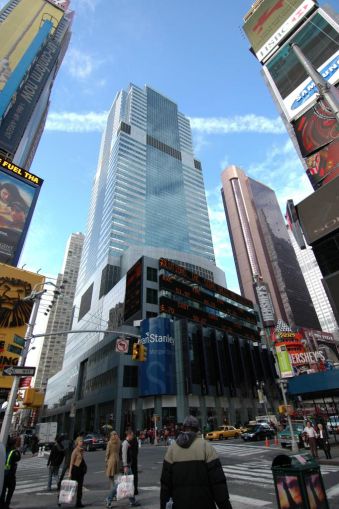 Watchmaker and leather goods seller Fossil Group will keep its current 3,241-square-foot Times Square location for 15 more years while Skagen, a subsidiary company, will open a new flagship store next door at 48th Street and Broadway under two new leases first reported in the New York Post on Tuesday.

The Danish Skagen brand’s first New York City location in the building at 1585 Broadway owned by financial services firm Morgan Stanley will debut new leather and jewelry lines out of the 1,585-square-foot space, according to CBRE.

“Fossil will have the ability to grow its business while retaining its clientele in one of the most active and exciting retail corridors in Manhattan,” said Amira Yunis, CBRE’s executive vice president for retail services and Fossil’s representative in the two leases, in a prepared statement. “This is an exciting continuing adventure for Fossil and the company is ecstatic to be opening the first Skagen store in New York.”

The Texas-based Fossil company acquired Skagen in 2012, and the retailer now operates over 400 stores and 4,000 wholesale sites with 13,000 employees, according to the firm’s website.

CBRE and Morgan Stanley declined phone and email requests for the landlord’s broker and rent prices, but the Real Estate Board of New York’s spring 2014 retail report noted that Times Square storefront rents jumped 11 percent over the past year to $2,407 per square foot.