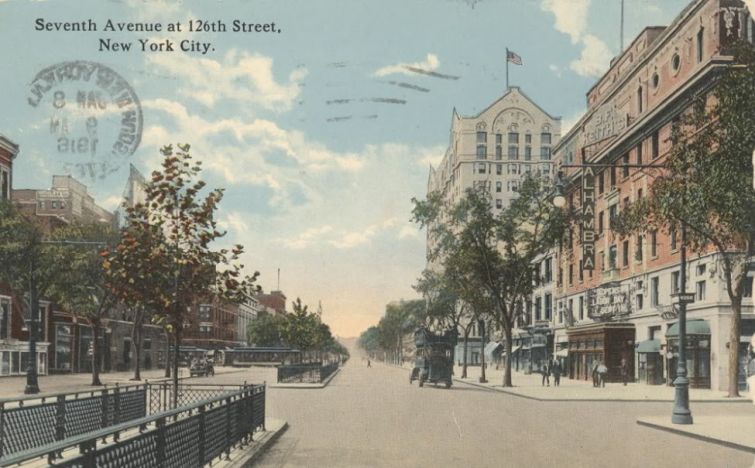 Orpheum Amusement Company acquires the property after construction stalls due to litigation. The theater, now called the Harlem Alhambra, opens for the spring season.

The venue starts showing movies and is renovated- to host concerts. Performers such as Billie Holliday, Bessie Smith and Duke Ellington make appearances. The Alahambra becomes one of the landmarks of the Harlem Renaissance and Jazz Age, along with nearby establishments like the Apollo Theater and the Lenox Lounge.

The theater and dance hall closes under financial strain during the Great Depression. The property is converted into offices, and falls into disrepair by 1970.

Two grandly named religious groups—the Most Worshipful King Solomon Grand Lodge Inc. and Star of Hope Grand Chapter, Order of Eastern Star—buy the property for an unlisted amount in 1971, hoping to renovate it and make it their headquarters, but those plans never materialize. A Department of Motor Vehicles office opens in the building temporarily. The next owner, Kisosoh Realty Corp., closes a $2.4 million mortgage on the property from Freedom National Bank of New York in 1988.

After civic groups push for the restoration of the historic property, the Alhambra Ballroom reopens in 2003. Later in the decade, Harlem Lanes bowling alley and a soul-food restaurant operate briefly in the space, but both later close. Landlord Mitchell Enterprises closes a $8 million mortgage on the property from North Fork Bank.

In February, Jem Realty Management buys the seven-story office building for $21.5 million. Jem takes a $12 million mortgage from Signature Bank, which it plans to use to renovate the building and attract new tenants.