Gale Brewer and the Battle Against 7-Eleven 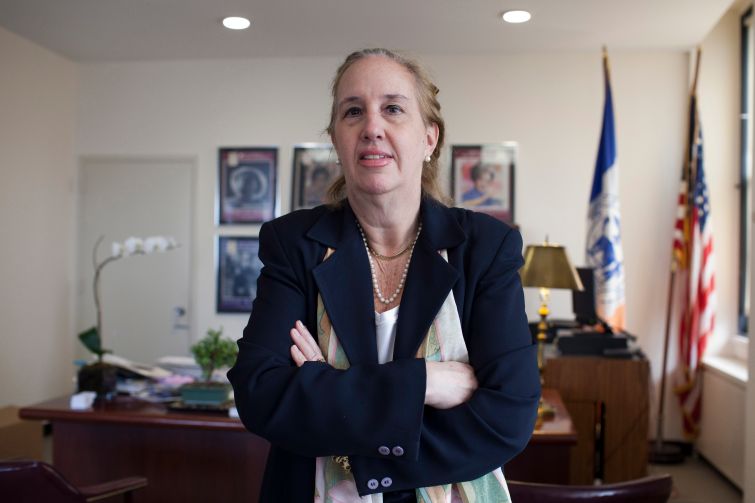 Gale Brewer has lived on the Upper West Side since 1970. She served as the area’s City Council member for 12 years, concluding at the end of 2013, before starting as the 27th Manhattan borough president. Ms. Brewer, who plans to open a ground-floor district office on West 125th Street, joined with city preservationists earlier this month to call for reforms to the landmarking process following the Landmarks Preservation Commission’s refusal to consider landmark status for the Rizzoli Bookstore building at 31 West 57th Street. As Manhattan Beep, Ms. Brewer is tasked with advising the mayor and City Council on borough concerns, providing feedback on all land-use matters, advocating for New York County in the municipal budget process and appointing members of the 12 community boards. Ms. Brewer successfully advocated for the passage of legislation while in the City Council that would compel landlords to fix repeat violations as well as a law that requires all city data be published online. In February, Commercial Observer chatted with Ms. Brewer in her office at 1 Centre Street about adjusting to her new position, her beef with 7-Elevens and the easiest and most challenging developers to work with.

How did you get abreast of all of the issues citywide?

Oh, I’m learning. But the issues are similar [to when I was in the City Council] in terms of land use. You want to start earlier in discussing some of the issues. If you’ve got a big project and a piece of land you want to work with the community board to say, “What do you want in this area?” We’re going to bring people together at the Madison Square Garden area. The City Council gave Madison Square Garden a 10-year lease on life. That would be an example of where you would bring people together now to plan [for its future], because 10 years goes very fast. I’m sure East Midtown is a good example. The community boards came together and worked on a plan. So we’ll do that in more districts. I’m never presumptuous enough to think I know everything. I do have, after all my years—I worked with John Lindsay; I go back that far—in government and the private sector and on my community board and on a lot of nonprofit boards, a sense of what the issues are. What you don’t know are the people who are thinking about the issues. That’s what I’m learning.

How are you learning it?

I go to meetings. I go to all of the community board meetings, all 12, personally. I also will be going to the precinct [community] councils, the parent organizations [Community Education Councils]. I go personally and listen and tell them what I’m thinking. I’m definitely listening.

Are you bringing stuff home at night to help facilitate learning?

I have lots of paper. For someone who loves technology I have too much paper. [In 2002, Ms. Brewer helped found and chaired the City Council’s technology committee.]

What do you miss about being in your old Upper West Side district office?

It’s the same issues—land use, schools, affordable housing, quality of life, the seniors. The question is, how do you work with the administration and the City Council to improve people’s lives?

Is this job more political?

It’s not more political. You have a bigger staff to work with. What a difference that makes. I had five people and now we have 50. It’s more getting things done. When you talk about arts education or young people, you can actually do something. Before, it was a huge stretch to pull off special projects.

You are a teacher, too, right?

I teach at Hunter—I was there this morning at 8 a.m. I teach policy and politics every Wednesday. I’ve been doing it for 20 years.

Who was the easiest developer to work with on the Upper West Side?

I appreciate developers who personally show up at the community board meetings. On the west side, Gary Barnett personally showed up for Riverside Center. The universities show up—Columbia University and Fordham.

Who was the most challenging?

The trouble is, I don’t know these people’s names because they don’t show up. There’s a guy named [William] Friedland. This guy owns a lot along Broadway. He never shows up. We don’t know him.

You have the power to O.K. vanity addresses. You instituted a new process. Can you explain it?

We had a gentleman who looks at these issues and who’s in charge of them. He does an excellent job. There are some [applications] now pending around Bryant Park that we are looking at—One Bryant Park, Two Bryant Park, Three Bryant Park. I spend a lot of time wandering around New York City, not just Manhattan, looking for addresses, because when I was in the City Council you don’t just go to the West Side. You have meetings in Midtown. You have a meeting in Brooklyn. Penn Plaza? Have you ever tried to figure that out? I get lost. We want to be sure when we do the vanity addresses that it’s synchronized. You’ve got 1, then 3, then 5 if you’re on the park. On the other side it’d be 2, 4, 6. I have a bill pending in the council that said “Would you please put addresses up?” [Ms. Brewer is a co-sponsor of the legislation to amend the administrative code of the City of New York in relation to street numbers]. I can’t tell you how many places I go and there’s no address.

How many pieces of legislation have you introduced?

I’ve co-sponsored 22 bills and one resolution [as of April 10]. This is the first time it’s ever being done in recent memory by a borough president.

You fought to limit the storefront sizes on the Upper West Side. What’s your beef with big box retailers?

It’s a streetscape issue. I’m for balance. On the west side, from 55th Street to 96th Street, there are 72 banks—at least there were last year—maybe more now. I hate to think. 55th Street and Ninth Avenue has four corners and three of them are banks.

They have not done so yet. There’s nobody in the banks. People are doing the mortgages online. They do their banking online. Who goes to the bank?

You made a joke when you came out against the proliferation of 7-Elevens, saying if you saw one more 7-Eleven, you were going to throw up. Why do you have so much animosity toward the 7-Elevens?

Mostly, in my experience, they existed in suburbia or gas stations. They just look weird on urban frontage.

Can’t it just be that we’re not accustomed to seeing them?

While the borough president comments on all borough land-use matters, how much power does the position have in real estate matters?

In a time when we’re all trying to work together—the community board and the city—the borough president can bring them together.

Are you essentially a liaison?

When I was in the Council I was appreciative of the work of the borough president. I’ve also worked in affordable housing in Queens. At that point, Claire Shulman was the borough president. Nothing would have happened without her. I was working for a private company [Telesis Corporation] just building affordable housing and we went to her for help. She was able to take the community board and the city and bring them together. It might be even more important in other boroughs.

What did your predecessor, Scott Stringer, do right when it came to balancing new development with neighborhood values?

What Scott did was help professionalize the community boards. He gave each one of them an urban planning graduate student who continues, and that made a big difference. We’re going to try to help them use technology, because that’s my background, to do the mapping. It’s easier said than done. If you’re going to figure out how many seniors you have; how many units you could use; and if you have new units, how many school seats could you use, it’s nice to think about it on a piece of paper. But if you don’t see it on a map, it’s hard to visualize. We’re going to take Scott’s community board work a step further.

What’s your relationship like with Mayor Bill de Blasio?

I get along with the mayor. We worked together for four years in the Dinkins administration. That was a tough job. I was director of the federal office in New York. He worked for Bill Lynch. And then he was chair of general welfare in the City Council for eight years and I was on that committee. So we worked together on issues. We’ve gone out for drinks in the past. I supported him when he ran for speaker [of the City Council in 2005].

What’s your favorite thing to do on the Upper West Side on the weekends?

Same thing I always do. I work on the computer. I love Riverside Park. I work.

Do you have any pets?