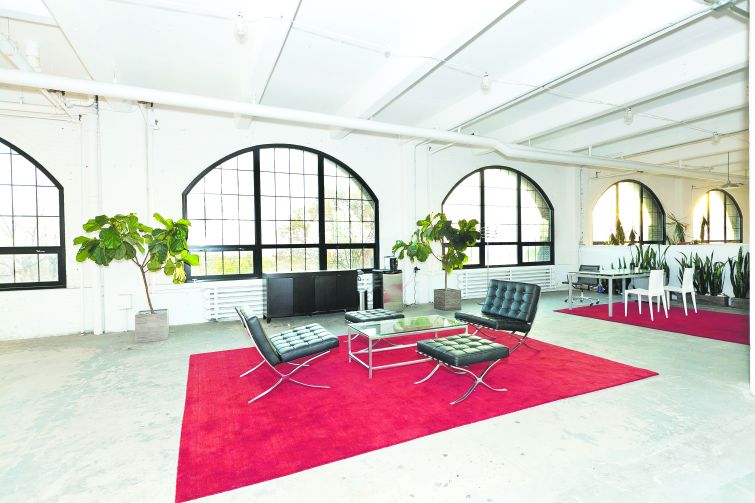 Taconic Investment Partners, the company behind the renovation of Google’s home at 111 Eighth Avenue, has undertaken a $25 million renovation of the BankNote building at 890 Garrison Avenue in the South Bronx. JRT Realty is marketing a newly redesigned 10,710-square-foot space on the fifth floor (a.k.a. the Lafayette Wing ) of the 400,000-square-foot building, and brokers Ellen Israel and Greg Smith told Commercial Observer that the setup of this full-floor private space within the landmarked gem will be particularly alluring to tech and creative tenants. “This is a jewel-like, really breathtaking building,” Ms. Israel said. “The space looks as if it were a Chelsea office space,” Mr. Smith added, “though you have your own identity in an industrial building.” The leasing duo from JRT discussed the plan:

A total of 24 oversize and arched bay windows line the space on three sides, with views of the Manhattan skyline to the southwest. “It’s an incredibly bright space, and you have a wonderful view,” Ms. Israel said, noting that across the street lies the Corpus Christi Monastery, which boasts lush trees and an ornate church building.

A rehashed grand entryway and staircase will greet employees as they exit the elevators. “It’s reminiscent of a grand staircase in a public governmental building,” Mr. Smith said, “like a staircase in the capital building.” The early 20th-century amber brickwork has been restored. “They tried to keep its historical look,” Ms. Israel said, noting that each step required the Landmarks Preservation Commission’s approval.

The building features three separate entrances. While the interior can be tailored to meet the needs of an array of tenants across artistic, nonprofit, governmental and other office needs, the exterior remains that of a beautiful industrial building. A big smokestack outside has been repainted red, while fire escapes were painted yellow. “It’s meant to be an artistic, whimsical approach,” Mr. Smith said.

Along with a concrete floor and the huge windows lining the space, 12-foot ceilings are ideal for tech and creative tenants looking to avoid rents reaching exorbitant levels in Midtown South and elsewhere in Manhattan. “The floors have a high floor-load capacity, and the building is fully wired and ready for tech- and media-type tenants,” Mr. Smith said.