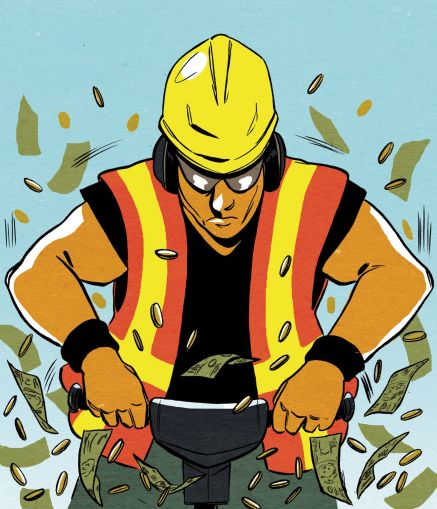 While Manhattan is clearly one of the most desirable places on the planet to live—and much ink has been spilled over rising rental prices therein—there is another side to the coin. The sky-high land values that come along with rising rents are now keeping a firm lid on multifamily development in Gotham.

Despite the enormous demand from renters, lenders are far more interested in financing luxury condominiums, hotels and office and retail development in Manhattan, sources told Mortgage Observer. And while developers and bankers cite myriad economic and practical reasons for the hampered development pipeline for multifamily projects, the ever-loftier land costs are the bedrock issue.

Other headwinds include a dearth of suitable sites ready for residential construction and the time-consuming process of assemblage, sources said. That’s why developers are pursuing new strategies. Some are scouring the outer boroughs for more affordable rental opportunities, while others are transitioning to hybrid projects (those that incorporate retail or office with multifamily development). Developers are also increasingly relying on tax credits to help make rental projects feasible.

Prime residential land in Manhattan often sells for around $1,000 per buildable square foot, said James Nelson, a partner at Massey Knakal Realty Services. That high a number—compared with between $100 and $200 per buildable foot in Queens, according to reports—complicates the financial calculus for rental projects. The fact that land costs are so high makes it economically difficult to develop rental properties at achievable rental rates.

“You just can’t build a rental at those numbers,” said Peter D’Arcy, the regional president of New York City and Long Island at M&T Bank, of the $1,000 figure. “It is challenging to create new capacity at a price point that is affordable.”

And banks just won’t lend to developers who need to acquire land at those costs, though they will gladly finance projects that have lower or no land costs that need to be factored in, sources said.

“In the last 18 months, you saw land prices go through the ceiling,” said Richard Bassuk, the co-chairman and CEO of Greystone Bassuk. Ideally, costs would be about half as high for multifamily rental projects in Manhattan to pencil out, he said.

Now, developers are increasingly turning to condos, which can economically support the elevated land values, because of their shorter-term payoff, sources said.

Mr. D’Arcy also noted that the growth in rents and apartment prices is “outstripping wage growth,” meaning that even the most lucrative developments—higher-end projects—may not make sense for long.

Sales of residential condominiums in Manhattan topped $4 billion in 2005 but then plunged to $86.9 million in 2009 during the financial crisis, according to RCA data. In recent years, activity has surged back to life, with sales of residential condo sites soaring 55 percent year over year, to $1.32 billion in 2012 and then 242 percent year over year in 2013, to a record $4.5 billion, the RCA data show.

By comparison, sales of Manhattan development sites for multifamily projects have yet to return to their precrisis high of $1.1 billion in 2007. These sales, which fell to as low as $37.4 million 2009, held relatively steady the past three years, ranging between $860 million and $900 million, according to RCA.

In fact, some developers are even converting multifamily rental properties into luxury condos, further depleting the rental market supply.

SBD plans to convert the 13-story, prewar rental building into high-end condos. New York-based Nostra Realty had owned the building, which has 85,839 square feet of residential space and 65 apartment units, since 1968.

Ayush Kapahi, a founding partner at HKS, also noted that this conversion trend is being driven by the elevated land values.

“Land prices are so high now that the only viable exit strategy for those that need to return capital in a two- to four-year time frame are conversions,” he said.

Condo conversions sometimes take creativity on the part of developers, who often have to buy out tenants and navigate rent-regulated units. Still, developers can make a tidy profit from such conversions, and their appetite for these moves shows little sign of slowing.

Time constraints are also hampering multifamily building in Manhattan. It takes considerable time to acquire land, assemble sites and jump through the necessary regulatory hoops to rezone sites and get required entitlements, sources said. Rezoning alone can add over a year to a project, according to Mr. Bassuk.

“The major problem is finding sites suitable for residential construction,” said Mr. Bassuk, underscoring that a lack of demand is not the problem. “It’s a long, drawn-out process.”

That process is also complicated by construction challenges presented by building on a narrow, crowded island. Engineers often encounter subsurface problems that increase the costs of developments.

“Construction costs are surging,” said Mr. D’Arcy. “It’s harder to get the quality laborers you may have gotten a year ago, when there were a lot more people on the sidelines. There is stiff competition for the best workers.”

All of these complications create a lag between the availability of rental properties and the ever-increasing demand for units in Manhattan.

“As the rents go up, that supports the economic return for new projects,” said Mr. Bassuk. “But it still takes that period of time to go and acquire the land to put the whole thing together,” so the pipeline is unlikely to show any improvement for some time.

Some developers who want to build multifamily rental properties are forced to sprinkle in other uses like retail, office and parking to help offset the high land costs.

“I think you’ll see more of that. It’s one way of sharpening the economic viability of what’s being developed,” said Mr. Bassuk, who said he has financed several projects that have six or seven different uses.

Mr. D’Arcy said that while hybrid buildings “help bring down the costs,” they are often complicated to make work in practice.

To be sure, multifamily rental properties are still being developed in Manhattan.

Mr. D’Arcy said M&T Bank recently co-led financing north of $160 million on a multifamily development on the Upper West Side in Manhattan (he declined to provide the exact address or name the amount paid). The owners were able to make the project work in part because the property was acquired in the aftermath of the financial crisis, lowering the land prices paid.

In addition to properties that were acquired in the ashes of the market meltdown, rental development is still a viable option for sites that have been owned for decades and thus have a lower cost basis.

“A lot of people like the idea they can pass something on,” said Mr. Bassuk, who is working on another rental project on a Manhattan site that has had the same ownership since 1970. “A rental real estate property has a risk/reward profile that is the best. Most people don’t want a one-shot event where they make money, pay taxes and that’s it.”

New York State and New York City co-sponsor the so-called 80/20 Housing Program, which uses tax-exempt bonds to help finance residential building construction in exchange for saving 20 percent of the apartment units for residents who earn no more than 50 percent of area median income.

Such 80/20 multifamily projects all enjoy a real estate tax abatement that lasts as long as 20 years.

“The lending community loves multifamily 80/20 housing, because it’s almost always done by the top-tier developers” in prime locations, said Mr. Bassuk. Earlier this year, Greystone Bassuk led the closing of a $210 million credit enhancement from Helaba Landesbank Hessen-Thuringen and PNC Bank under the 80/20 program to finance construction of a 319-unit residential project in the Flatiron District, at 160 Madison Avenue, by J.D. Carlisle Development Corp.

New York state officials recently rejiggered the 80/20 program in an effort to spread a smaller subsidy amount to more projects and spur affordable housing development. Now, only the 20 percent of affordable units in a project will be eligible for the lucrative tax credits, compared with 50 percent previously, leaving developers on the hook to find additional traditional financing when they undertake 80/20 projects. Still, it is unclear if the change will affect development drastically, sources said.

Mr. Bassuk said he does not believe the revamp will translate to increased 80/20 development in the outer boroughs. That’s because, while rents and land prices are lower outside of Manhattan, elevated construction costs remain a constant headwind.

He also cautioned against claims that real estate developers ever scored huge windfalls from 80/20 projects, estimating the return on these deals at just 5 percent to 6 percent, without taking into account leverage. “It’s not anything that is off the wall,” he said

He added that the change in the program by the state was not political, in his opinion. In fact, he said if the number of claims moderates, housing officials could have the flexibility to go back to the old format.

“Everybody wants affordable housing, but you can’t produce it unless the economic incentives are sufficient for someone to go forward,” Mr. Bassuk said.

“It seems the de Blasio administration favors density over tax abatement,” said Ben Thypin, the director of market analysis at RCA. “They’d rather allow someone to build more than give them a tax abatement.”