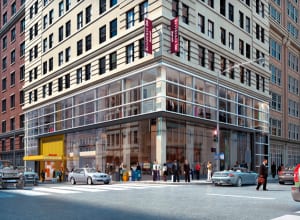 Clothing chain Gap Inc. has reportedly signed a roughly 18,900-square-foot lease for a three-level space at the upcoming Marriott Residence Inn at 170 Broadway in Lower Manhattan.

Public records show that a group of investment partners – reportedly made up of Crown Acquisition, The Carlyle Group, Tribeca Associates and Highgate Holding – purchased 170 Broadway for $55 million in late 2011 from AMG Realty Partners.

The group redeveloped the property into a hotel and just last month The Real Deal reported that the group is in contract to sell the retail condominium component to a domestic pension fund led by Morgan Stanley for close to $70 million.

The 243-room, extended-stay Marriott Residence Inn, designed by architecture firm Stonehill & Taylor, is slated to open upstairs this spring with a design inspired by the “energy of the neighborhood generated by the business-centric atmosphere and efficient use of time and money,” according to the firm. References to gears, clocks, and slow exposure photography will be found throughout the property’s guestrooms, public spaces, and restaurant.