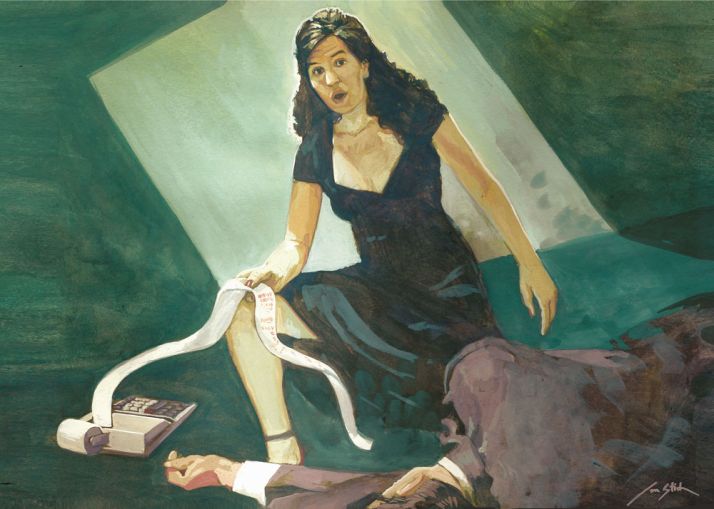 Accountant Irv Schwarzbaum is helping a 10 percent shareholder in a Brooklyn commercial property prove that the 90 percent shareholder is undervaluing the price of their building in a potential sale. While there is some pressure to pay off a loan that has come due at the property and the majority owner presented a third-party buyer, Mr. Schwarzbaum is skeptical. He suspects there is some shady swap going on whereby the 90 percent owner would get a piece of the property through a side deal.

That case is just one that Mr. Schwarzbaum is contending with as a member of WithumSmith+Brown, PC’s litigation support services group.

Then there is the case in which Brian Sanvidge, an accountant at Baker Tilly Virchow Krause, LLP, was recently involved. He was brought in by a Brooklyn property owner to investigate maintenance costs that amounted to more than $500,000 at a series of residential buildings. The figures appeared out of line with what they should have been. Mr. Sanvidge looked at the costs of the materials along with what the maintenance company charged and couldn’t find documentation to support the fees.

In the end, “Several of the bills were not paid where there was outstanding money, because they couldn’t justify the fees that were charged,” Mr. Sanvidge said. The owner stopped doing business with several of the involved vendors.

While these criminal activities are not the norm, they do occur in the New York City commercial real estate market, and some accountants have noticed an uptick as of late.

Aside from construction-related crimes, real estate accounting crimes run the gamut from kickbacks to self-dealing to the improper use of investors’ funds to the commingling of money to related party management fees.

Mr. Sanvidge, who noted that fraud cases typically go undetected for at least 18 months, said his office saw a 22 percent increase in fraud-related work in the construction and real estate sectors last year. He recently added another member to the team to focus on construction and real estate accounts due to an increasing number of accounting crimes. The frauds have been more prevalent in Brooklyn and Queens, because the projects are larger in Manhattan, and when projects are large, there is more oversight.

“It’s increased, because it’s harder to hide what was easier to hide when margins were more robust,” Mr. Sanvidge said.

His firm is often brought in by an investor or outside counsel to recreate the books for an entity alleging real estate and construction industry misconduct. Much of that wrongdoing is related to repair issues, improvements, moving expenses from one project to another or running costs/expenses through an unrelated project.

As the market continues to heat up, will the number of accounting crimes rise? Some real estate accountants and attorneys think so.

In a better market, accounting fraud is easier to commit, Mr. Schwarzbaum said.

“When you have low vacancies, no one is checking, because there’s significant cash flow to pay out investors,” he said, adding, “A rising market sometimes hides a lot of ills.”

As the market picks up, there will be more cases of this kind of fraud, said attorney David Pfeffer of Tarter Krinsky & Drogin. He added, “If history is an indicator, we would expect there to be more scams, more lawsuits, more people trying to game the system, because there’s just more money out there.”

Mr. Pfeffer, whose clients are primarily real estate developers, said the commission of these crimes hasn’t been commonplace in his 20 years in the business. But when he does get the cases, what he sees are instances of development companies setting up an infrastructure to “improperly send assets and profits to these other companies, which investors and banks have no part of.”

Other real estate accounting pros seem to subscribe to the “strain theory,” which states that when times are tough, crime ticks up as people buckle under financial pressure.

Nicholas Loguercio, an audit partner with Berdon LLP, said that when there is a down market, owners may get desperate.

“It just seems that when the economy is worse, people are looking closer and harder, and that’s when things begin to unravel,” he said.

Mr. Schwarzbaum countered,  “I would argue the down markets just bring out the questioning.”

Another accountant said the shady dealings occur regardless of market conditions.

While desperation may add to it, “I think the improprieties exist regardless of the market,” said William Jennings, the partner in charge of the real estate group at Marks Paneth LLP.

In an ongoing case that has made the news, developer Zachary Vella of V.E. Equities was sued by a minority shareholder in the company that built 949 Park Avenue for allegedly self-dealing in the form of interest payments to himself on loans he never established making. The case is scheduled for a compliance conference this month.

On Spring Street, an investment firm sued developer Stephane Boivin alleging, among other things, misappropriation of funds and conversion of a property. Private equity fund Silo Capital sued Mr. Boivin for allegedly improperly demolishing 186 Spring Street (a Soho townhouse that belonged to the Beastie Boys’ Adam Horovitz) and using it as collateral for a loan along with the adjacent 182 Spring Street, The Real Deal reported.

Accounting issues can occur in real estate when there are families involved. Oftentimes, there are active and inactive family members, and issues can arise over compensation.

For example, the head of Magnum Real Estate Group, developer Ben Shaoul, is being sued by his parents, Abraham and Minoo Shaoul, for allegedly misappropriating millions of dollars from the refinancing of mortgages on Manhattan properties they co-owned, TRD reported. The parents, seeking $50 million, are accusing their son of “using clever legal maneuvers to derive payouts from buildings purchased by the company without their permission,” TRD said. A motion to amend the complaint is currently pending.

“I think at times it’s a question of family members feeling entitlement,” Mr. Wieder said. “To some extent, it could be jealousy.”

While real estate accounting fraud is considered a crime, the cases end up being resolved civilly. Often, the victims want to forego the criminal prosecution route.

Perhaps most significantly, institutional investors want to resolve their claims rather than scare investors by admitting to being scammed.

“They don’t want to allege in the public eye that they were ripped off,” Mr. Pfeffer said.

Also, legal costs can become astronomical if it becomes a criminal matter, as cases can languish for years, Mr. Nicholas Loguercio said.

In addition, if the perpetrator is in jail, the victim isn’t getting his money back.

Another reason why the cases aren’t prosecuted in criminal court can be attributed to a lackluster response from prosecutors, some real estate pros said.

“Prosecutors are generally reluctant to take cases that are complex and where the victims are companies or they’re wealthy,” Mr. Pfeffer said.

In order to convince a prosecutor who’s saddled with lots of cases to take a real estate accounting fraud case, Mr. Schwarzbaum said, “You need to have a slam-dunk case.”