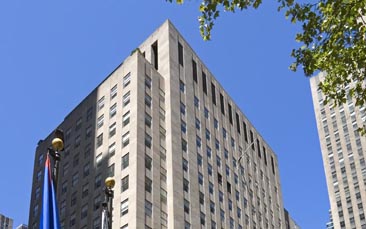 TV Guide has subleased the entire 18,284-square-foot 14th floor at 50 Rockefeller Plaza from Bank of America, Commercial Observer has learned.

The tenant has signed a seven-year deal and will pay rent in the mid-$40s per square foot, according to data from CompStak. “This is a floor Bank of America identified as excess space,” said Cynthia Wasserberger of Jones Lang LaSalle, who represented the bank. “It is a fully furnished, modern installation. It’s ‘plug and play’.”

The 14th floor is one of two earmarked for sublease by Bank of America. Real estate investment trust WP Carey previously signed a sublease from the bank, which is the largest tenant at the Tishman Speyer property.

The space on the 14th floor boasts 16 windowed offices, three conferences rooms, an open plan work are with 32 work stations and views of the Rockefeller skating rink.

“People regard 50 Rockefeller Plaza as a very nice building within the Rockefeller Center complex,” Ms. Wasserberger said. “It is one of the more boutique buildings in RockefellerPlaza.”

TV Guide, which is split between digital and print entities, will relocate to 50 Rockefeller Plaza from 11 West 42nd Street. CBS Interactive controls the digital division, while the print magazine is owned by OpenGate Capital. TV Guide, first printed in 1953, was acquired by the buy-out firm in 2008.