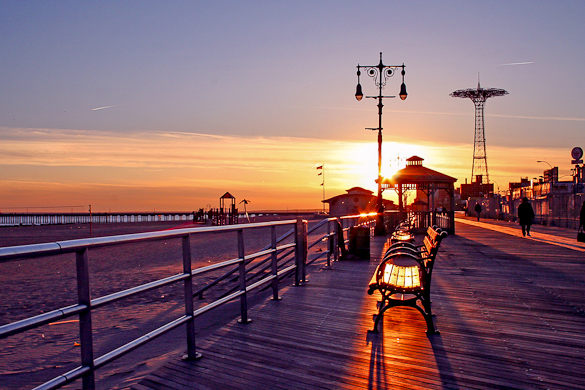 South Brooklyn’s waterfront neighborhoods have long fostered considerable charm and affluence despite being overshadowed by the explosion of “brownstone Brooklyn,” Williamsburg and Bushwick.

“The demand is certainly there, and the supply is getting there,” said Massey Knakal Director of Sales Alex Svetlakou, who focuses on South Brooklyn.

South Brooklyn neighborhoods like Sheepshead Bay and Gravesend established themselves as valuable real estate strongholds years ago, and Manhattan Beach has ranked among New York City’s most expensive enclaves. South Brooklyn in recent years has also witnessed significant spikes in investment and development, as young families and affluent working professionals look to its shores as a happy medium between city life and suburbia.

The number of development site and investment sales in Brighton Beach doubled to 12 between 2009 and 2013; in Gravesend, the number jumped from 16 to 25; and in Sheepshead Bay, the number soared from eight to a staggering 43, according to data from Massey Knakal.

Earlier this month, Mr. Svetlakou and the firm’s chairman, Bob Knakal, arranged the sale of a portfolio of eight buildings within a 3-mile stretch of those three neighborhoods for $78 million, showing that developers are willing to shell out big money for land that is very limited and in high demand. The portfolio pulled in $173,000 per unit.

“We got great numbers, showing that investors really valued these prime properties simply due to location and the people that reside there,” Mr. Svetlakou said.

Muss Development is doing its part on the residential end, having nearly completed the Oceana Condominium and Club, a string of luxury buildings between Brighton Beach Avenue and the Riegelmann Boardwalk, where 100 percent of existing apartments are sold, with an upcoming building attracting a new wave of South Brooklyn residents.

“South Brooklyn is becoming a real magnet for young families and people who don’t want to leave New York City,” said Muss Development’s Jason Muss. “Not everybody is a Williamsburg person, and many people simply don’t want to live in Manhattan for whatever reason. But those same people are not necessarily eager to go to the suburbs.”

From the retail and nightlife scenes filtering into Sheepeshead Bay to the multimillion-dollar homes that line sections of Ocean Parkway cutting through Gravesend and Sheepshead Bay to the 3-acre sports complex set to become the largest in Brooklyn on Coney Island, the area has a lot going for it despite its troubles, which were only magnified by Hurricane Sandy.

“Young professionals are coming from all over the world directly to Brooklyn and bypassing the whole Manhattan thing,” Mr. Muss said. “They are willing to venture further and further out” from North Brooklyn’s red-hot neighborhoods.

Muss Development is working to complete the 16th and final tower of the mammoth Oceana project. Demand for the new space is high, with 70 percent of its 62 units now sold, given lack of supply and low vacancies at neighboring developments like SeaCoast Terraces in Brighton Beach.

When complete, Oceana will boast 927 units, including a 15,000-square-foot medical or community center and 8,500 square feet of retail. The units range in price between $650 and $750 per square foot, which is modest compared to North Brooklyn, where costs can stretch up to $950 per foot, Mr. Muss said.

“We have built and sold a tremendous number of apartments, and we think we did a great job,” he said. “At the same time, another element of success is the sheer lack of new housing and new quality product.”

An 80,000- to 100,000-square-foot development project, which allows for both retail and residential development, is also in the works at 102-122 West End Avenue in Manhattan Beach. It looks to fill the housing gap at the northwest corner of West End and Ocean View Avenues, sources said.

The housing demand fits hand in hand with retail development, with Sheepeshead Bay and Brighton Beach clubs and restaurants suddenly sparking a nightlife that was largely absent a decade ago. Emmons Avenue, running east to west along the northern edge of Sheepshead Bay, now features rooftop bars, clubs and cafés.

“The summer scene there is just fantastic,” Mr. Muss said. “People who have [lived] there for a while [are] shocked by what’s happening, and I think that’s only going to get more pronounced.”

Meanwhile, a trio of Russian entrepreneurs on Coney Island is developing MatchPoint NYC, a 3-acre sports complex that is set to become Brooklyn’s largest. Aside from its seaside amusements, that neighborhood has long been a blight compared to the more affluent neighborhoods it borders.

The $20 million project, which includes nine indoor tennis courts, an Olympic-size swimming pool and yoga, dance, fencing and gymnastics studios, is perhaps exactly the type of facility needed on Coney Island, a haven for strange crimes providing fodder for the tabloids and low-income housing that was battered by Superstorm Sandy and struggles to stay afloat.

In the summer of 2009, the City Council passed a major rezoning of Coney Island meant to encourage new housing opportunities, foster redevelopment of vacant and underutilized land and prompt retail growth. A Johnny Rockets and Applebee’s recently appeared there, and Grimaldi’s Pizza now supplies the neighborhood with fresh brick-oven pies at 1215 Surf Avenue. Sadly though, Sandy put progress there on hold.

New regulations to prevent flooding of residential properties can cause headaches; commercial landlords don’t want to get burned by another storm. And that’s not to mention that insurance companies raised premiums and some won’t even take the assignments they once jumped after.

Coney Island wasn’t the only area of South Brooklyn that suffered. Data from PropertyShark.com shows that directly preceding Sandy median sale prices in Manhattan Beach had spiked to $1.12 million in the third quarter of 2012, nearly beating out the Flatiron District for the No. 3 spot on the citywide list. The figure dropped to a 2013 average of $757,500, which didn’t even make the year’s top 10 list (and barely beat out Gowanus for the No. 9 spot on the Brooklyn list).

“Sandy certainly did not help for development in Southern Brooklyn,” Mr. Svetlakou said. “I had a property that was sent to contract at $800,000 on Coney Island before Sandy and after Sandy the very same buyer offered $500,000 for the same piece of property. So the values certainly went down, and developers are just scared to build.”

Mental and physical barriers exist in South Brooklyn as well, with many believing that the commute is too lengthy for those working in Manhattan, though Mr. Svetlakou insisted that the B or Q train from Brighton Beach takes 40 minutes to get to 34th Street in Manhattan.

The positive seems to outweigh the negative, but perhaps the greatest barrier for entry into South Brooklyn for developers is simply a lack of land. In North Brooklyn, particularly Williamsburg and Bushwick, factory sites and neglected warehouses provide seemingly unlimited development potential. Those opportunities are perhaps not as vast in South Brooklyn, but they do exist.

Finding them, Mr. Muss said, is “just not a very easy task.”