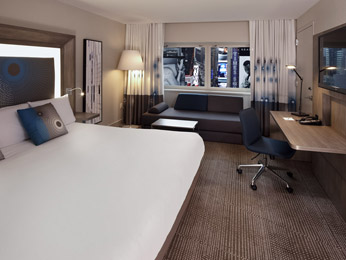 The buyer will acquire the 34-story, 480-key hotel from funds affiliated with Apollo Global Management and Chartres Lodging Group. The property, located at 226 West 52nd Street, was built in 1981 and underwent a significant renovation between the second half of 2012 and November of last year.

“I am delighted that we have secured this transaction,” said Kwek Leng Beng, chairman of M&C, in a prepared statement. “Times Square is one of the world’s top tourist destinations and this beautifully refurbished property will undoubtedly increase our share of the international travel market in New York, one of our three key gateway cities.”

M&C’s acquisition of the Novotel New York Times Square is expected to close in the second quarter. The buyer’s New York hotel portfolio also includes the Millennium Broadway Hotel at 145 West 44th Street and ONE UN New York at One United Nations Plaza.

As reported by Commercial Observer, hotel transactions are expected to accelerate in the New York market this year.  “I haven’t seen this many large assets on the market in a long time,” Justin Magazine, vice president at Savills, told Commercial Observer in December.