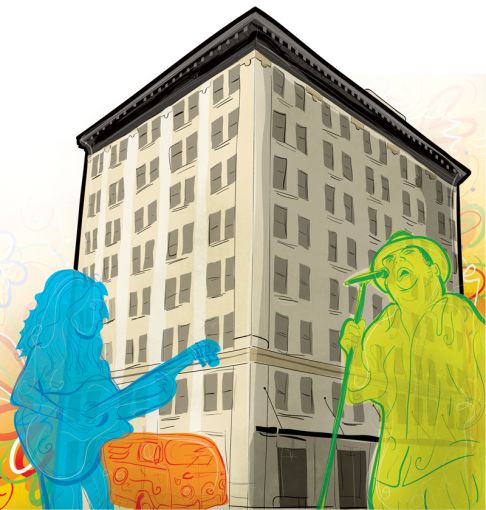 By 2001, the Spin Doctors had all but broken up. The New York alt-rock band that earned Top 40 fame with the hits “Little Miss Can’t Be Wrong” and “Two Princes” had been inactive for nearly two years.

Then news broke that the Wetlands Preserve, the hometown venue where the band first made its mark, was closing. Shortly thereafter, a request came in to reunite the band for one last show at the club.

“If anything was going to bring us back together it was going to be the Wetlands, because we had such a history there,” said Aaron Comess, the band’s drummer, adding that the reunion helped to revive the band.

A quarter century ago this February, the Wetlands Preserve, a rock club with an activist bent, opened at 161 Hudson Street in Tribeca. Though its tenure was short-lived—it was open just over a decade—the venue’s musical legacy lives on in the then lesser-known acts that played there.

The list of bands that played the Wetlands includes not just the Spin Doctors but Oasis, Pearl Jam, Dave Matthews Band, Phish and even Maroon 5, which played the club’s last showcase in 2001.

“At the time, it was the largest venue in New York that was open seven days per week doing live music,” said Peter Shapiro, who was 23 when he bought the club from original owner Larry Bloch in 1997.

As much as the story of the Wetlands is about music, it is equally about real estate and the gentrification of Tribeca in the early 2000s. Though Keith McNally paved the way for gentrification with the introduction of the Odeon in 1980 and Robert De Niro brought his star-enhanced reputation to the once-industrial neighborhood with the debut of the Tribeca Film Center in 1989 and Tribeca Grill in 1990, it wasn’t until the late ’90s and early 2000s when the neighborhood truly began to catch on with the city’s loft set.

With real estate prices escalating and developers keen to cash in on the growing market, the Wetlands Preserve was pushed out.

“If we didn’t have to close, we would have had to close,” Mr. Shapiro said, referring to the venue’s incompatibility with the gentrifying neighborhood. “The neighborhood changed, and the scene changed, and it just wasn’t a good match for kids leaving a show.”

Following the closure of the Wetlands Preserve, 161 Hudson Street was converted into luxury condominiums, with the space the club occupied transformed into commercial and lobby space.

In a testament to the emergence of the Tribeca loft culture that vanquished the Wetlands, the condominiums at 161 Hudson have been owned by the likes of The Daily Show’s Jon Stewart, Jeremy Piven of Entourage fame and former New York Mets catcher Mike Piazza, according to various reports. The residences still command premium prices—a one-bedroom unit in the building traded last September for more than $1.5 million, according to StreetEasy.

“The irony of it is that Larry told the story that he picked the corner where no one would ever want to live—at the exit of the Holland Tunnel,” Mr. Shapiro said.

The commercial portion of the building, once occupied entirely by the Wetlands, has since been subdivided into three retail spaces to capitalize on the rise in popularity of the neighborhood. A 2,000-square-foot retail space at the property closed in December for more than $2 million, according to StreetEasy data.

“We have interest from fashion, home furnishing, art—it lends itself for anything,” said Roxanne Betesh of Sinvin Real Estate, who brokered the sale on behalf of the seller and has the space on the market for lease.

Rent for retail space in the area ranges from $100 to $150 per square foot, Ms. Betesh said, and there is no shortage of high-end takers. Tenants within walking distance include designer Thom Browne, the restaurant Locanda Verde, Duxiana beds and a number of galleries.

Today, the Tribeca address is hardly recognizable as the former home of the Wetlands, which in its heyday boasted unique pockets of space and a tie-dyed VW bus—now housed at the Rock and Roll Hall of Fame.

For Mr. Shapiro, a New York native, there is solace in the fact that the building wasn’t transformed into another club, a hip bar or a restaurant.

“You can’t even see what it used to be—I mean, I can, but it’s really different,” he said. “It makes it easier.”

Opened in a former warehouse by Mr. Bloch on Valentine’s Day 1989, the Wetlands Preserve was founded with both a musical and environmentalist mission. Mr. Bloch, the owner of a printing business, had no previous experience in the industry.

“I started Wetlands with two untapped passions of mine in mind,” Mr. Bloch, who died in 2012, told The New York Times in 1995. “One was my desire to entertain people, and the other was my desire to be an activist and an environmentalist.”

Though the club was run as little more than a break-even business, the activism center at the Wetlands was reportedly funded in excess of $1 million.

“I wasn’t a heavy activist—I was 23—but what I felt strongly about was that we needed to continue it for the people that wanted to be involved,” Mr. Shapiro said of the center.

Mr. Shapiro was a Northwestern University film student whose only previous experience in the music business was making documentaries about fans of the Grateful Dead and the infamous parking lot scene outside the band’s shows. He was encouraged to buy the club by musician Marty Bostoff. On a lark, he called Mr. Bloch to discuss the possibility.

“I didn’t know anything about clubs, but I reached out to him, and we talked many times,” he said. “He helped make it happen.”

Mr. Shapiro bought the club without ever looking at the financials—the seller had refused to show them to suitors. “I was young, so I said, ‘Fine. What’s the rent? I’ll build my own numbers.’”

Even from the early days, however, the writing was on the wall. It was perhaps Mr. Shapiro’s youth and naïveté that allowed the club to last as long as it did.

“I knew it would be hard to run, but I was idealistically naïve,” he said.

It was his age, Mr. Shapiro believes, that convinced Mr. Bloch to select him in the first place. With neither family nor financial obligations, he could stay true to the club’s original mission.

“If I had to make money, I would have done things differently, and it wouldn’t have been good for the Wetlands,” he said. “I’d shave back the environmental center or raise drink prices.”

The closure of the Wetlands was a harbinger of troubling times to come for small-scale music venues. Among the recent closures is Sullivan Hall, the Greenwich Village club that for a short time carried the Wetlands’ mantle. The next and larger venue on the chopping block is the almost century-old Roseland Ballroom, which is scheduled to close next year and is likely to be redeveloped by Algin Management into a 50-story tower with a retail base.

“Because of the gentrification of New York City, having a space that size is hard now,” Mr. Comess said. “I can’t even imagine what the rent on a place like that would be now.”

Despite the venue’s premature closure, the trial by fire of running the Wetlands laid a foundation for Mr. Shapiro’s future in the business. Today, he is better known as one of the owners behind Williamsburg’s Brooklyn Bowl and the mastermind responsible for the resurrection of the Capitol Theatre in Port Chester.

Though the Wetland’s unique layout and atmosphere meant it could never be truly replicated elsewhere, Mr. Shapiro, whose Manhattan office is littered with memorabilia from each venue, is confident its influence lives on in his other ventures.

“There is no Brooklyn Bowl without Wetlands,” he said. “The Cap’s got that vibe too, and there’s no Capitol without Brooklyn Bowl. Wetlands led to all of these things.”

The descendants of the Wetlands Preserve are going both national and international in 2014. Brooklyn Bowl will open in London in January and Las Vegas in March. The Vegas branch, a 78,000-square-foot, 2,000-person venue, will open as part of the Linq, a 300,000-square-foot open-air retail district spearheaded by Caesars Entertainment.

“Brooklyn Bowl is not Wetlands,” Mr. Shapiro said. “But it was birthed by Wetlands.”