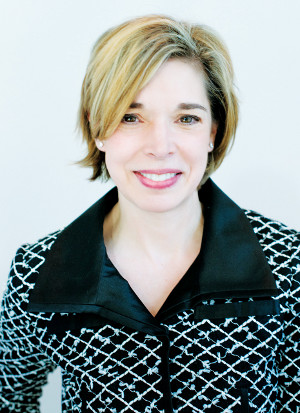 At last month’s Commercial Real Estate Finance Council January conference, Mortgage Observer met with Ms. Riley, who runs capital markets for North America for GE. She filled us in on her current responsibilities and the evolution of her career and shared valuable pieces of advice for women early in their own.

Mortgage Observer: What are your current responsibilities?

Debbie Riley: I cover capital markets for our North American commercial real estate platform, including operations in Canada, Mexico and the U.S.—this includes our CMBS and balance sheet products.

Last year, my team enabled over 50 percent of the $6.5 billion of financing closed in North America.

This is a great convention, because you have a wide range of participants, including the issuers for CMBS, mezz investors, bond buyers, portfolio lenders and servicers, so over the course of a few days, you can cover a broad spectrum of the industry.

Can you talk about your background and how you got involved in the industry?

My father was a developer of apartments in the Midwest. He started in Florida as a general contractor. We moved to Ohio in the early ’70s where he then went into partnership with my mother owning and managing apartment complexes, so it was pretty much a family operation.

During college at the University of Michigan, I had no intention of going into commercial real estate.  I was in accounting—I got my C.P.A.—and then I spent four years in public accounting with PricewaterhouseCoopers. I did auditing for four years, which is a fabulous background, because it just takes an incredible amount of discipline.

After four years, I decided that I no longer wanted to be an auditor and targeted a finance company that would suit my background. I landed at Heller Financial, which was bought by GE in 2001. After a year in their corporate accounting department, I joined their real estate group.

What precipitated the move to the real estate group?

I had done a lot of real estate in public accounting, but there was also a man who was leading the real estate group, Michael Blum. If you were to ask me about my mentors, I would mention Mike, just because he really encouraged women. He gave women a lot of visibility within the organization, and he liked to work with really bright women. And at the time, his second in command was a woman named Lauralee Martin. She’s now the C.E.O. of HCP. Before that, she was the C.E.O. of Jones Lang LaSalle for the Americas and before that C.O.O. and C.F.O. of Jones Lang LaSalle.

I saw her as a role model. Both Lauralee and Mike encouraged me to broaden my skill set and to learn more about the credit and sales side of commercial real estate.

If I’ve learned anything in my career, [it’s that] sometimes you have to take what may appear like a lateral move, but if you’re continuing to expand your knowledge of the business, then it’s really just a stepping stone to something bigger.

How has the experience of working at GE been?

GE has been very good for me. I was really open regarding the GE acquisition, because GE is such a powerful name, compared to coming from a small company where you didn’t have that brand name at all. I thought it would be pretty powerful to go out to market with that brand name and be able to do large transactions. GE is great a company for women. They have a women’s network and really foster mentoring and sponsorship of women. Not all companies give women the flexibility they need, and I am thankful to have the ability to commute between my family in Chicago and my job in New York.

Has someone at GE mentored you?

For the most part, my mentors have been largely outside of GE. Lauralee is still a mentor and sounding board. The relationships with people who have known me and watched my career over the past 15 to 20 years are generally the people I look to when a career decision or opportunity comes up.

Is there any piece of advice you would give to young women who are starting out their careers?

Being flexible. I think when you come out of college, whether women or men, they have this idea regarding how their career is going to be, and it doesn’t always happen that way. You have to be flexible and see if it’s right for you and if you’re interested in it. The other advice is that, if you’re interested in something and engaged, you will do very well. To succeed, you have to become comfortable with taking more personal risks.

You were instrumental in reestablishing the securitization program at GE, right?

Yes. The securitization market after the financial crisis had a couple of years when it was shut down. Similar to a lot of other people, we exited it. We relooked at it in 2010, and we got back into the business, and I am very excited about what we’ve accomplished. We’ve been very successful in that we did a half-billion of volume in 2013 and are looking to do a billion or more throughout the course of 2014.

Are there any trends that you’re seeing?

One of my observations over the last few days at the convention is that there is a perception of less risk, which ultimately leads to compressed pricing. Additionally, with increasing rates, you can expect that spreads will get compressed.