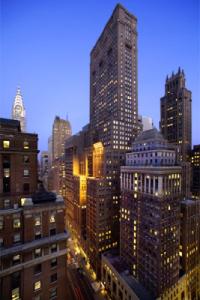 Founded in 1945 with £15 million of capital, today 3i boasts nearly £12 billion of assets under management. The company, headquartered in London, operates offices worldwide and will relocate its New York location to the 41st floor of One Grand Central Place from 400 Madison Avenue.

“3i’s business was thriving, and the company sought larger offices in a high-end building that could accommodate its growth,” said Alexander Chudnoff, vice chairman of Jones Lang LaSalle, who represented the tenant, in a statement. “Empire State Realty Trust was able to provide the investment management firm with a full floor in an iconic building.”

Constructed in 1930, the 55-story office tower at 60 East 42nd Street was formerly known as the Lincoln Building. As reported by Commercial Observer, law firm Hafetz Necheles & Rocco signed a 12,720-square-foot deal on the 36th floor of the building last year. Earlier, Allianz Real Estate signed a lease on the 37th floor at One Grand Central Place.