Hold the MSG: World’s Most Famous Arena Gets 10 Years to Find New Home 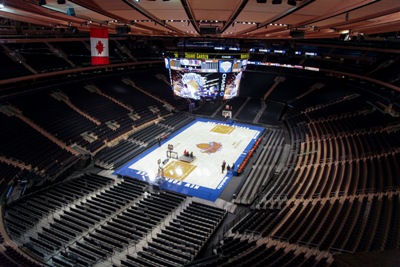 There had been rumblings for years.

Ever since the original Penn Station was demolished to make way for Madison Square Garden in the 1960s, commuters and architecture critics alike bemoaned the cramped subterranean train hub and the unsightly arena perched above it.

Then, like a spark, Michael Kimmelman, The New York Times architecture critic, brought the debate to the fore with a column in February urging the City Council to deny Madison Square Garden’s request to renew its permit to operate in perpetuity. With a request set to begin the Uniform Land Use Review Procedure, it couldn’t have come at a more pivotal moment. “The last thing New York needs is to enshrine the aging and oppressive Garden, which may be the world’s most famous arena but is also one of the ugliest and, for millions of commuters using the station trapped beneath it, a daily blight,” Mr. Kimmelman wrote.

The ensuing debate, which stretched from a Community Board 5 meeting in February to City Planning and on to the City Council in July, was a heated one. Opponents pointed to the need to redevelop Penn Station—an impossible task with Madison Square Garden located where it is—while supporters emphasized the Garden’s $1 billion renovation, which was completed this fall.

A day after the column ran, at a Valentine’s Day meeting, CB5 laid the groundwork for the debate to come, recommending that the application for Madison Square Garden’s special permit be denied unless, among other stipulations, the permit be limited to a 10-year term.

Civic groups, namely the Municipal Art Society and Regional Plan Association, rallied around the debate, urging stakeholders to promote the renovation of Penn Station and relocation of the Garden.

At the subsequent City Planning Commission hearing in April, those stakeholders sparred for hours, with Madison Square Garden enlisting Knicks and Rangers legends to help make its case.

Early the next month, the commission proposed a 15-year limit for Madison Square Garden’s special permit—some way short of the Garden’s request that it be renewed in perpetuity but a victory over those demanding a 10-year term.

Garden officials, for their part, argued that nearly all special permits are granted without expirations.

“[The Garden] helps drive the city’s economy by supporting thousands of jobs and attracting hundreds of annual events,” the company said in a statement following the decision. “[It] is being unfairly singled out because of a decision that was made 50 years ago—to demolish the original Penn Station.”

The Garden’s argument is a valid one. Criticism of Penn Station’s demise started immediately following the decision to demolish the original structure and construct the fourth iteration of Madison Square Garden.

“Any city gets what it admires, will pay for and, ultimately, deserves. Even when we had Penn Station, we couldn’t afford to keep it clean. We want and deserve tin-can architecture in a tinhorn culture. And we will probably be judged not by the monuments we build but by those we have destroyed,” Ada Louise Huxtable wrote in a damning 1963 editorial in The New York Times.

But even the power behind the World’s Most Famous Arena could not turn the tide working against it.

A month after City Planning convened on the issue, City Council Speaker Christine Quinn, who was then the front-runner in the mayoral race, penned a letter to Madison Square Garden President and CEO Hank Ratner, suggesting the Garden be granted a 10-year permit.

In her letter to Mr. Ratner, Ms. Quinn contrasted the “thrilling moments” experienced by New Yorkers at Madison Square Garden against the congested commuting experience at Penn Station.

“As the number of travelers passing through the station has swelled to over 600,000 a day—far beyond the projections planners made when the current Garden was first proposed—these problems have only worsened,” she wrote.

The rest of the council heeded Ms. Quinn’s word, voting 47 to one to extend the arena’s permit for just 10 years—enough time, the council argued, for the Garden to find a new location and for New York to initiate plans to renovate Penn Station.

“The costs they have put into this will inevitably be amortized,” he told The Commercial Observer in July. “The Garden knew full well that its permit was expiring, and it made a business decision to invest. The public is not responsible.”

The decision, though, is just the first of many steps in a process that may see the Garden relocate and Penn Station renovated. A viable location for a new Madison Square Garden and a fully cooked plan for Penn Station are just two of the problems that need to be solved over the next decade. If they’re not, the 2013 process will just be repeated all over again.

“It would be very sad,” Mr. Kimmelman said of the possibility. “It would not benefit any of the parties involved.”