Welcome to the Bio-Dome 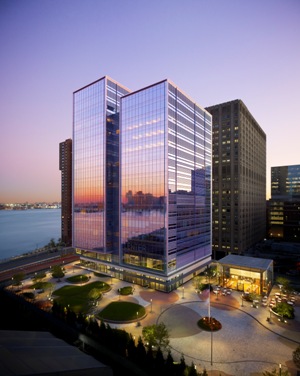 When it announced it would close its research facility in Nutley, N.J., Swiss biotech company Roche went out to the market in search of a new state-of-the-art facility.

Courted by cities across the Northeast, including established pharmaceutical hubs in New Jersey and Cambridge, Mass., Roche officials added an unlikely option to the list of potential locations: New York City.

The company’s search, which was soon narrowed down to four competing facilities, two each in New Jersey and New York, quickly revealed a leading candidate: the Alexandria Center for Life Science. Sitting in the heart of Manhattan’s East Side Medical Corridor at 29th Street and First Avenue, the gleaming research and development campus sits at the center of New York’s emerging biotech industry.

“New York is on the top of people’s lists right now, but prior to Alexandria, there was no commercial location for life sciences,” said John Cunningham, senior vice president and regional market director for New York at Alexandria Real Estate Equities, the facility’s developer.

Biotechnology, the harnessing of cellular and bimolecular processes to develop technologies and products including drugs and hormones, first gained traction in New York City in 2005 when Mayor Michael Bloomberg announced the establishment of the privately financed East River Science Park, spearheaded by Alexandria. Since that time, the industry has grown by leaps and bounds, now boasting more than $250 million in yearly venture capital funding, up from $177 million in 2010.

Among other key selling points, New York boasts 25 clinical research trials underway, the second largest concentration of National Institutes of Health grants in the country and no less than 219 Nobel Laureates. Perhaps most impressive is that, in the past 10 years, there have been twice as many patents filed in New York than in San Francisco and Cambridge combined.

Last summer, Roche signed an 11-year lease to anchor Alexandria’s 420,000-square-foot West Tower. The company will join a number of high-profile pharmaceutical tenants that have already set up shop in Alexandria’s East Tower, including Eli Lily and Pfizer.

“When the CEO came to evaluate their shortlist, he embraced what we were talking about in terms of the collaborative environment,” Mr. Cunningham noted.

In return for the 235 jobs Roche is expected to bring to the Alexandria facility and New York, the company will receive tax incentives valued at $6.6 million from Empire State Development’s Excelsior Jobs program.

Founded in 1994, Alexandria Real Estate, the largest real estate investment trust focused on owning, operating and developing real estate for the life science industry, tapped into early demand for collaborative research facilities. With more than 17 million square feet across 175 properties in Cambridge, New York, Washington, D.C., San Francisco and elsewhere, the company has a unique perspective on emerging biotech hubs and the demands of tenants.

“New York is definitely unique, and there is opportunity here, but it was relatively untapped,” Mr. Cunningham said. “We compared it to San Francisco and Cambridge and found it had all the fundamentals; it just required investment.”