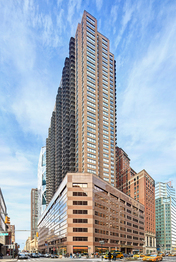 Despite having five years left on its current lease, Universal Music Group has signed 10-year renewal for its 242,505-square-foot space on floors two through eight at Jack Resnick & Sons’ 1755 Broadway, The Commercial Observer has learned. The music publishing company’s lease agreement for the entire office portion of the mixed-use building now extends through 2028. UMG, which represents hundreds of artists through its variety of subsidiary labels, operates offices in 60 countries and splits its corporate headquarters between 1755 Broadway and 2220 Colorado Avenue in Santa Monica, Calif. The legendary label has supported artists across the musical spectrum including U2, Van Morrison, The Beastie Boys, Bob Marley and Taylor Swift.

Located on the northwest corner of Broadway and 56th Street, the 43-story mixed-use property at 1755 Broadway includes a commercial and retail base along with a 480-unit luxury residential tower. Built in 1987, the building’s retail tenants include Wells Fargo Bank, Staples, GNC and Chipotle.

The landlord was represented in-house by Dennis Brady, who did not return requests seeking comment. Scott Gottlieb of CBRE, who declined to comment, represented the tenant.