Near Barclays Center, the Rave that Wasn’t (But Might Be) 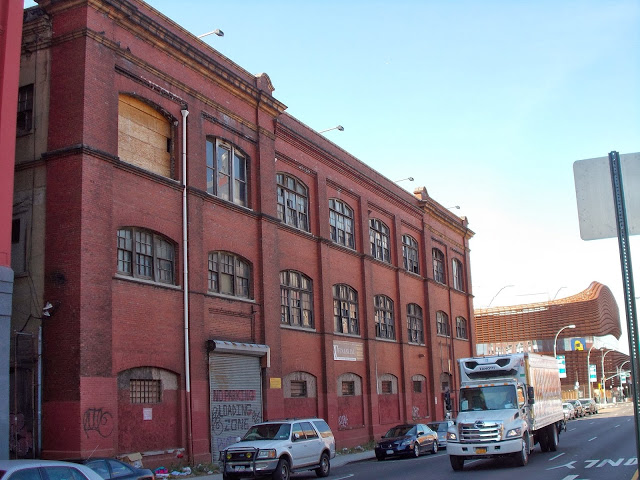 The Factory, at 700 Dean Street jsederstromobserver

It was billed as New York City’s largest Halloween party, an all-night rave with a costume contest in three 1000-plus capacity rooms and more than 15 DJs.

The Factory, a new venue in Brooklyn—operating without permits—aimed to piggyback on the Sensation electronic dance music show Oct. 26 at the Barclays Center just a few hundred feet away.

SEE ALSO: The Google Effect: What Happens When the Giant Moves In?

But “Fear Factory: A Sensational Afterparty” never happened, surely disappointing many of the more than 1,300 people who said on Facebook they were going, from an invited list of nearly 72,000. A former museum exhibitions factory at 700 Atlantic Avenue just east of Sixth Avenue, the venue is not quite ready for prime time—and too centrally located to evade queries from the police and fire departments that apparently short-circuited the event.

The event’s cancellation came with barely 24 hours notice. (Early-bird tickets started at $15, while tickets at the door were to start at $30.)

“We are extremely sorry this had to happen, but we did not want to start this event and be shutdown early,” the promoter, who goes by the name Mikey Boom, stated on Facebook Oct. 25. “We have been working non-stop since wednesday building the stages and decorations for this event, but it would not be fair to our guests to have an incomplete night.”

Mikey Boom said that The Factory would open in November and promised a more complete statement by Oct. 28. No such statement has been forthcoming, generating some grousing on Facebook about refunds. An email to his production company did not generate a response nor did a query to the building’s owner, Waterbridge Capital, which focuses on “underperforming real estate assets in prime locations.”

When Waterbridge bought the 40,000-square-foot building for $5.46 million in February 2012, a “person familiar with the matter” told The Wall Street Journal that it might be turned into a retail center. That may have been overambitious, since that block, which includes a storage building but otherwise is occupied by a segment of the Metropolitan Transportation Authority’s Vanderbilt Yard, gets little foot traffic.

Indeed, the block is part of the 22-acre footprint for Forest City‘s Atlantic Yards project, and slated to contain three towers, likely later in the project’s build-out sequence, but ultimately dooming the existing buildings. LLCs affiliated with Waterbridge have taken out three mortgages on the property, totaling $7.6 million, from W Financial Fund, which makes short-term bridge loans.

EDM venues have come under scrutiny, given drug-related deaths at shows, such as at the Electric Zoo in September. In this case, the paperwork was apparently not in order.

According to Department of Buildings records for the building, its most recent Certificate of Occupancy is from 1978. As Robert Perris, district manager of Community Board 2, explained in response to a query, a new certificate would require a licensed architect or engineer to file a change of use with the DOB.

A venue with an occupancy of greater than 75 also needs to file a Place of Assembly Certificate of Operation with the DOB, and no such certificate is on record.

Should a venue seek a liquor license, applicants must notify the local community board with at least 30 days notice; no such request was filed, Mr. Perris noted. A one-day license requires an application to the State Liquor Authority, and apparently that didn’t happen either.

Advertising material for Fear Factory suggests that the event’s promoters altered their plans; one flier indicated that the rave would have a full bar, while others did not mention alcohol service.—Norman Oder