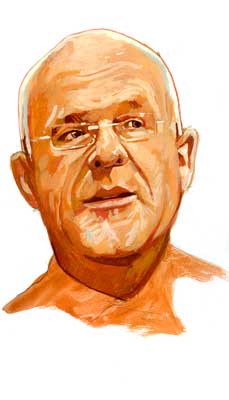 Albert Behler, president and chief executive of the New York-based Paramount Group, has kept busy in Washington, D.C., this year.

“This transaction represented an exciting opportunity to add another trophy asset with premier tenancy to our growing presence in the D.C. market,” Mr. Behler said in a company statement. “We look forward to continuing our growth in the District as great opportunities present themselves.”

Paramount, which controls a portfolio of office properties in New York, D.C. and San Francisco valued at more than $11 billion and totaling approximately 14 million square feet of space, now owns six trophy buildings in the D.C. market, including 1899 Pennsylvania Avenue and 2099 Pennsylvania Avenue, which it purchased in the beginning of 2012.

“Paramount is opportunistically buying what they can, because there’s so much competition right now,” Dan Fasulo, managing director and head of research for Real Capital Analytics, told The Commercial Observer. “They’re not buying vacant buildings either. Skadden Arps has a lease on 95 percent of the Commercial National Bank Building for the next 13 years, so that was an extremely stable bond-like investment.”

Prior to that acquisition, Paramount shed one of its 12 New York office properties, Candler Tower at 220 West 42nd Street in Times Square. The real estate firm had purchased the historical building developed by Coca-Cola founder Asa Griggs Candler for a reported $208 million in 2006 and began to shop it around a year later in 2007.

By November 2012, Mr. Behler and company sold the 24-story, 228,000-square-foot building to Epic LLC, an affiliate of U.K. real estate company Epic UK Ltd. run by members of the Elghanayan family, for an undisclosed amount.

“In this sale, we leveraged Candler Tower’s desirability with a profitable sale that will enable Paramount Group to further grow its national portfolio of Class A office properties in the country’s preeminent business centers,” Mr. Behler said at the time of the deal.

Paramount, which was established by German entrepreneur Werner Otto in 1968, has sponsored a series of seven funds since 2003 for investments in the three markets it owns properties in. Looking ahead, Mr. Behler, who has led Paramount since 1991, and the company’s other long-standing senior managers may play a bigger hand in San Francisco, where they hold a 50 percent stake in 1 Market Plaza.

Paramount is currently looking to invest between $150 million and $250 million in San Francisco office properties as part of a total equity raise between $600 million and $1 billion, local real estate news outlet The Registry reported earlier this year. An additional 25 percent of the fund would go to investments in D.C., while the remaining 50 percent would go to investments in New York.

The Pennsylvania Public School Employees’ Retirement System, which approved a commitment of up to $100 million towards the fund, stated in a public document that Paramount “has proven its ability to seek out opportunities that require retenanting a building or managing near-term lease rollover in order to generate attractive returns.” —Damian Ghigliotty